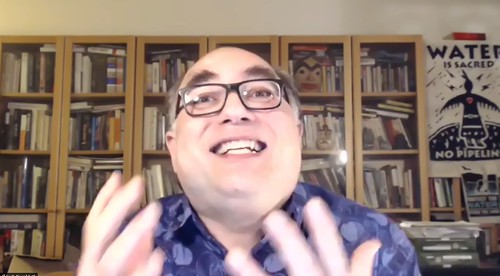 
Josh Kornbluth is really working the Empathy Circuit these days. Unlike, say, the Borscht Belt or the nearly vanished cabaret clubs, the Empathy Circuit isn’t any sort of entertainment network. It’s the complex wiring that winds through various parts of our brains and allows us to feel empathy – that is, the ability to care about, imagine or even try to feel the feelings of another being.

The masterful Kornbluth has long had a way with a beguiling autobiographical show – Red Diaper Baby, Haiku Tunnel, Love & Taxes – and his latest, Citizen Brain, comes at the most opportune moment imaginable. It’s too bad we don’t get to sit together in the Ashby Stage auditorium for this Shotgun Players production, but it turns out that Kornbluth’s vivacity, humor and intelligence fairly burst out of the Zoom box in which he performs his monologue live through Nov. 8. In these tense weeks leading up to the election, I can imagine no more effective balm than spending about 75 minutes with Kornbluth while he talks about brain science and making an effort to care about other humans (especially the ones who piss you off).

Written in collaboration with Aaron Loeb and Casey Stangl (who also directs), Citizen Brain is rooted in Kornbluth’s family. This time the focus is on his mom, Bunny, and her late-in-life second husband, Frank, who develops Alzheimer’s disease. With a real-life connection to brain disease, Kornbluth becomes involved as an artist fellow at the Global Brain Health Institute, a collaboration between UCSF’s Memory and Aging Center and Dublin’s Trinity College. It was here that Kornbluth began to understand how empathy works in the brain and how, if you consider our collective national consciousness as a “citizen brain,” it would appear that our empathy circuit has gone dark. There’s some crossover terrain here with his 2007 show Citizen Josh in which he discussed how important it was to speak respectfully with people on opposite sides of whatever spectrum might be generating tension, but this time he’s coming at it from an artist/humanist/scientist perspective.

All of this is also set against the backdrop of the 2016 presidential election and its divisive fallout, which makes Kornbluth wonder, “Could it be our country has dementia?” It’s a fair question, and though he doesn’t exactly have an answer, Kornbluth, with the help of his neurosurgeon mentors, begins to develop a solution that begins simply: take a breath; take another breath; then “make a leap into the perspective of another person.” Thinking on a grand scale, Kornbluth envisions this solution becoming nothing short of a peaceful worldwide revolution of empathy.

And what’s interesting about that from a Kornbluthian point of view is that Josh is at long last fulfilling the destiny laid out for him by his Communist parents as detailed in his show Red Diaper Baby. His revolution might not involve Marx, Lenin or Stalin, but it’s a a full-circle revolution moment none the less.

That’s part of the Kornbluth magic – storytelling that feels intensely personal and warmly universal – and it’s on full display (and in near close-up!) in this captivating online performance. With this show – in itself an act of deep empathy – and his ongoing work at citizenbrain.org (be sure to check out the videos), Kornbluth’s revolution is ramping up and working its way from heart to heart. Since watching the show, I’ve already heard Kornbluth’s voice in my head say, “Take a breath. Take another breath.” I’m going to continue working on my empathy circuit and try to play a small part in the revolution.