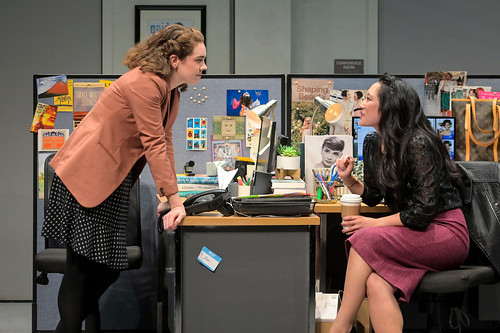 Coworkers Ani (Martha Brigham, left) and Kendra (Melanie Arii Mah) commiserate with each other over their publishing jobs and toxic workplace in Branden Jacobs-Jenkins’s Gloria, at ACT’s Strand Theater through April 12. Below: Miles, the intern (Jared Corbin, left), talks with Dean (Jeremy Kahn) about his future plans. Photos by Kevin Berne


Branden Jacobs-Jenkins’ Gloria is a fascinating play. It’s a lively workplace comedy until it’s an unsettling workplace drama. There’s a sheen of satire to it but also reality and heart. There’s a bracing boldness to it that makes its two hours fly by, and its path is never exactly what you think it will be.

Director Eric Ting navigates the tonal shifts expertly with the support of a sterling cast. There’s not a weak or even wobbly performance here, and with some actors playing up to three roles, that is a thrilling thing. I especially loved Martha Brigham as a good-hearted office busybody, a curt publishing doyenne with an even more curt haircut and as an overly enthusiastic, slightly goofy script reading lackey. I was also delighted by Jared Corbin as a cheerful intern, a loquacious Starbucks employee and, in a sharp contrast to the intern, a show-biz executive.

Three established Bay Area actors, Brigham, Lauren English and Jeremy Kahn are giving the kind of performances that further solidify their status as actors whose work you miss at your peril. They are always good, reliable performers, but more often than not, they are brilliant, and that is most definitely the case here. 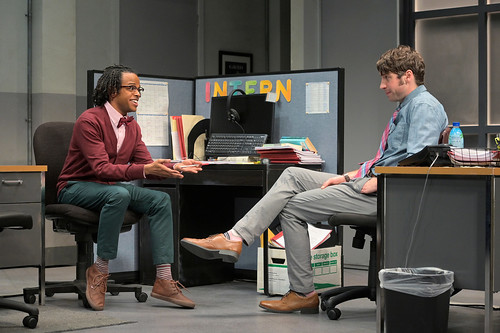 I reviewed Gloria for the Bay Area News Group. Here’s an excerpt:

Director Eric Ting, who has previously collaborated with Jacobs-Jenkins at Berkeley Rep on “An Octoroon,” establishes a propulsive rhythm to what is seemingly an average day at the office. The dialogue is lightning fast, and it doesn’t take long to suck us into the office drama involving secret manuscripts, the intern’s last day and the frustrations of feeling that work is sucking all the life out of your life.
There are barbs aimed at millennials and boomers, jealous tirades and harsh confrontations, all before the lunch hour. It’s as if David Mamet, with his rat-a-tat-tat dialogue and workplace snark were writing a sitcom for the CW.
But Jacobs-Jenkins has plans to go deeper into the office dynamic and what it means to share a formative experience with people who are neither friends nor family. We spend a great deal of time with these people, and what do we really know about them?