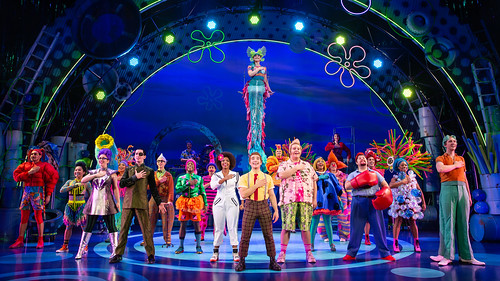 The company of The SpongeBob Musical, part of the BroadwaySF season at the Golden Gate Theatre. Below: Daria Pilar Redus is Sandy Cheeks, Lorenzo Pugliese is SpongeBob SquarePants and Beau Bradshaw is Patrick Star. Photos by Jeremy Daniel


The “why” is easy. When you’ve got a product that earns literally billions of dollars around the globe, at some point you have to stop and say, “Gee, wouldn’t this be a great Broadway musical?” At least that’s what happens these days, especially with successful animated ventures – please note all the Disney musicals (except Aida), Shrek, Anastasia and The Prince of Egypt on its way. So it wasn’t at all surprising when the folks at Nickelodeon decided to turn the internationally beloved SpongeBob SquarePants, created by the late Stephen Hillenburg, into a splashy live musical.

Following the Lion King blueprint, producers turned to a theater director who earned lots of off-Broadway and Chicago street cred before heading to Broadway to turn their franchise into something that could potentially please everybody: die-hard fans of the smiling yellow sponge, musical theater enthusiasts and families who want to enjoy a theater outing together.

The resulting show, SpongeBob SquarePants: The Broadway Musical, was the kind of energetic, colorful endeavor that nearly did the trick when it came to making everybody happy. Director Tina Landau and scenic/costume designer David Zinn delivered something with broad humor, fan service and buckets full of flash and sparkle. Cynical critics had to admit they were somewhat surprised to enjoy something they would never have expected to like in a million years. The show never really found its audience on Broadway and closed after less than a year without recouping its costs.

But you can’t sink a sponge. Much of the Broadway cast reconvened for a television broadcast of the show on Nickelodeon last December, and now a non-Equity tour of the show is criss-crossing the country. That production, with a simplified new title for the road – The SpongeBob Musical – is making a quick five-day stop at the Golden Gate Theatre as part of the BroadwaySF season. 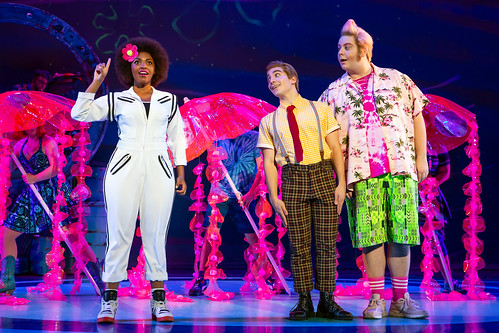 Zinn’s DIY set (think water weenies, metal drums and other garage sale-type elements) has been scaled down, and the young cast wavers in vocal quality and comic timing, but this SpongeBob makes a mildly successful case for the leap from TV (and movies and theme parks and gazillions of products) to Broadway for SpongeBob and all his neighbors from Bikini Bottom, their home at the bottom of the sea.

You don’t watch a musical like this lamenting the art form that gave us Carousel, Gypsy and Hamilton. No, you enjoy what there is to enjoy, which in this case is a bright, vivacious package full of sweetly acerbic characters providing entertainment that does indeed have appeal to young and old. Some knowledge of SpongeBob would be helpful but is not required. One wise decision the creative team made was to free the actors from cumbersome theme park-y costumes of any kind. If this guy is a well-adjusted sponge, and that gal is a science-loving squirrel, and this guy is a starfish and that gal is a computer, well it all makes a demented sort of sense without making any sense at all. At least it’s mostly easy to know who’s who and what’s what in this tale of impending apocalypse for SpongeBob and his pals (there’s a volcano and attempts at drama but none of that really matters).

The book by Kyle Jarrow captures a lot of what’s sweet and salty about the show, and Landau’s restrained chaos direction feels like a live-action cartoon, heavy on the looney gags and visuals. It was a smart move to have a percussionist on stage making a whole host of cartoon sound effects (three cheers for Ryan Blihovde. That helps keep things lively, although the show’s length (2 1/2 hours including intermission) does feel like a slog through a kelp forest here and there. That probably wouldn’t be the case were the score stronger or at least more consistent.

The songs represent the work of many people, most of them bona fide rock and pop stars (with only Sara Bareilles and Cyndi Lauper representing experience with Broadway musical success). There are members of Aerosmith, Plain White T’s, They Might Be Giants and Panic! At the Disco alongside artists including John Legend, Yolanda Adams and even David Bowie (who had done a voice on the TV show and let producers adapt his 1995 song with Brian Eno “Outside”). It’s an uneven mish-mash, but orchestrator/arranger Tom Kitt works hard to make it all sound like it belongs to the same show. The best numbers are Lauper’s “Hero Is My Middle Name” and They Might Be Giants’ “I’m Not a Loser.”

That last number, performed by a four-legged squid named Squidward Q. Tentacles (Cody Cooley), is the show’s apex. The sourpuss character attempts to convince himself he’s not a loser by imagining himself as the center of a lavish production number filled with pink sea anemones (the ensemble decked out in fluffy, funny costumes) and a solo four-footed tap dance. SpongeBob, played by the chipper Lorenzo Pugliese, never gets his own showstopper, but he’s a beaming presence on stage, and though his friendships with Patrick Star (Beau Bradshaw) and Sandy Cheeks (Daria Pilar Redus) are sweet, some of his most affecting moments are with Gary, his (inanimate) pet snail.

If corporations are going to keep turning their intellectual property into Broadway musicals (there must be an easier, more reliable cash grab), they could do worse than The SpongeBob Musical. There’s still a shiny, happy theme-park feel to the show in spite of all its smart Broadway touches, but it’s got some charm, some heart and that good old Broadway optimism that the sun will come out tomorrow.