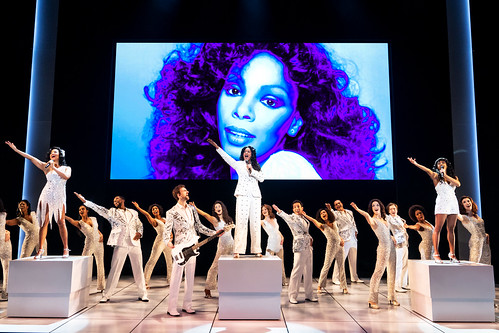 Dan’yelle Williamson (Diva Donna, left), Alex Hairston (Disco Donna, center), Olivia Elease Hardy (Duckling Donna) and the company of Summer: the Donna Summer Musical at the Golden Gate Theatre as part of the BroadwaySF season. Below: The three ages of Donna in various shades of blue. Photos by Matthew Murphy for Murphymade


For a terrible show, Summer: The Donna Summer Musical is fairly enjoyable, and that is for one reason alone: the music. As jukebox musicals go, this one is toward the bottom of the list, which is surprising given that director and co-writer Des McAnuff has two shows much (much) higher on that list: Jersey Boys and Ain’t Too Proud: The Life and Times of the Temptations.

Summer suffers from the bane of the jukebox musical: forcing innocent pop songs into being show tunes that are meant to convey something meaningful about plot or character. When “Dim All the Lights,” a groovy tune about gettin’ down and dirty, is sung at a funeral, we know we’re in trouble.

If Summer had a knowing sense of humor, such moments might play better. For instance, in the completely tone-deaf (emotionally not musically) scene involving cartoonish domestic abuse set to “Enough Is Enough,” Donna fights back, and one of her weapons happens to be a coffee table book about Barbra Streisand. Say what now? Joke or bad idea? Hard to say, but probably the latter.

Like The Cher Show, another jukebox bio musical that never quite connected on Broadway, Summer represents the late Donna Summer with three actors portraying her at different times in her life. There’s Ducking Donna, a young girl from a big family in Boston played by De’Ja Simone filling in for an ailing Olivia Elease Hardy. Once young Donna drops out of high school and heads to Europe, she becomes Disco Donna played by Alex Hairston, who is really the most interesting Donna as she goes from unknown to big star. And sort of lording above them all is Diva Donna played by Dan’yelle Williamson, who serves as our guide through this “concert of a lifetime.” 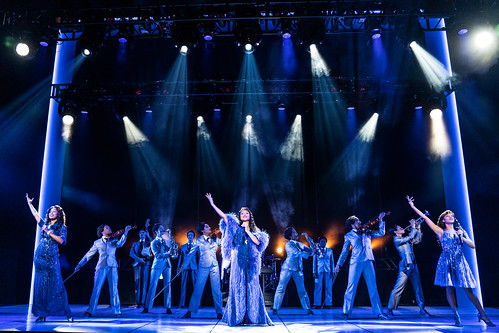 If this really were a concert, things would be so much better. The Donnas could talk about life moments and sing the songs surrounded by the mostly female ensemble working through Sergio Trujillo’s rather uninspired choreography and wearing the glittery costumes by Paul Tazewell. You could also keep most of Robert Brill’s set (especially the gigantic Studio 54 disco ball), even if the design leans too heavily on over-active video screens, and Howell Binkley’s concert-appropriate colorful lighting could stay as well. Great voices, enjoyable songs, flashy lights and colors – that’s really all we need to be happy.

The book by McAnuff, Robert Cary and Colman Domingo does Summer (or anyone in her life) no favors because it’s shallow, cheesy and unreliable. All of these things may have happened to Summer in exactly this way, but because of the way the show puts her biography across, it all feels like gloss and shine with no relationship to reality. If Summer really did engage in a pitched battle with her record company, we never really know the details beyond the fact that the fight fits nicely with her song “She Works Hard for the Money.” And Diva Donna’s attempt to explain her “God made Adam and Eve, not Adam and Steve” comment, which hurt and alienated her gay fan base, by singing “Friends Unknown” as a tribute to those lost to AIDS feels more like a PR move than a deeply felt moment. More shine over substance.

All we really need here is for the three talented leads to perform Summer’s hit parade. There are delicious moments of pure performance – “MacArthur Park,” “On the Radio,” “Heaven Knows” – but they get derailed by the storytelling. When we finally get an unbridled, “Last Dance,” it feels like the party has begun at last, but then the show is over. In real life, Donna Summer was hot stuff and we loved to love her, baby. But on stage she’s another casualty of the empty-calorie cash grab known as the jukebox musical.