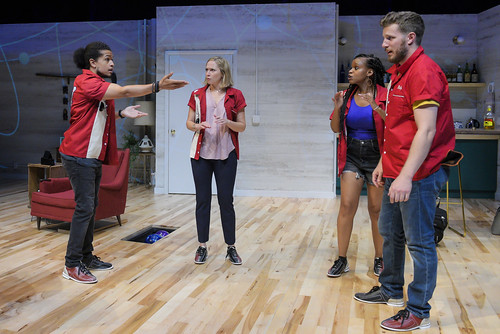 The cast of Berkeley Repertory Theatre’s White Noise by Suzan-Lori Parks includes (from left) Chris Herbie Holland as Leo, Therese Barbato as Dawn, Aimé Donna Kelly as Misha and Nick Dillenburg as Ralph. Below: Holland and Barbato as Leo and Dawn work through some life and relationship challenges. Photos by Alessandra Mello/Berkeley Repertory Theatre


Suzan-Lori Parks’ White Noise is an intensely interesting play. Just not a very good one.

And that’s surprising given that Parks, a Pulitzer Prize-winner, has bent, molded and shaped contemporary theater to her will through sheer force of intelligence, powerful writing and the courage to configure theater as she needs it to be configured. Her most powerful plays – The America Play, Topdog/Underdog, Father Comes Home from the Wars (Parts 1, 2 & 3) – take inspiration from other pioneering playwrights (Homer, Brecht) and become wholly original Parksian examinations of race and the endless echoes of slavery.

White Noise, now at Berkeley Repertory Theatre’s Peet’s Theatre, continues exploring those issues, but it would appear that Parks wants to do that in a seemingly conventional way. Her set-up in Act 1 feels like the pilot of a Netflix series. Two interracial couples, friends since college (and, for a short, blissful time, even bandmates), are still close now that they’re living in a big city (never named) and preoccupied with adulting.

Leo (Chris Herbie Holland) is the play’s fulcrum. He’s a promising black artist who has a long-gestating craetive block. He has wrestled with insomnia since childhood, when a Sunday school teacher told him that the sun was going to go out. He’s anxious and sleep deprived, but he keeps saying that “through sheer force of will” he gets through his days. His college sweetheart, Dawn (Therese Barbato), is a crusading lawyer, “one of the good guys,” as she keeps putting it. She could have gone with a big firm but wanted to start at the bottom to see what it felt like (and, of course, to help the underrepresented).

Once a week, Dawn and Leo meet their besties at the local bowling alley. Ralph (Nick Dillenburg) inherited a mint from his bowling-alley magnate father, and that cushion of privilege allows him to do some sideline writing and college teaching as a lit professor. That multi-million-dollar cushion also allows his girlfriend, Misha (Aimé Donna Kelly), to pursue her career as a vlogger. She hosts a live-stream call-in show called “Ask a Black” in which she, as she describes her performance style, “dials up the Ebonics.”

So far, so Netflix. But then Leo, during a late-night walk through a posh neighborhood, is assaulted by the police simply for being a black man where they didn’t think he should be. He is understandably traumatized and comes up with an extreme plan to deal with that trauma, not to mention his general life malaise.

If you’d rather not know Leo’s plan, stop reading. But this is where things get interesting…and then ultimately end up disappointing. 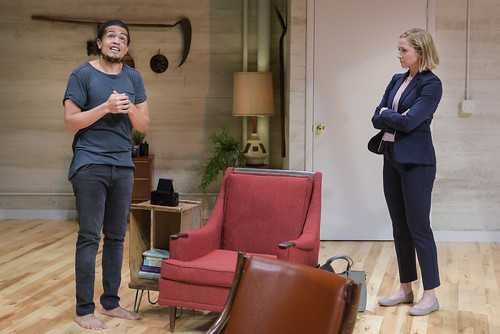 Over the weekly bowling game, Leo says he would like Ralph to buy him for nearly $90,000 (the cost of his credit card debt and student loans) and make him a slave for 40 days. This is not something that would ever happen in real life, so the fact that Ralph needs little persuading to agree or that the women go along with it after feeble protestations hardly matters. Playwright Parks is conducing a theatrical experiment here and needs to jump start it.

The problem is that the experiment turns out to be not that interesting. No new theatrical ground is broken in terms of structure. There’s a big chart documenting 40 days that get ticked off in the longer second act. Ralph gets way too enthusiastic about being a slave master, and Leo seems to find some semblance of growth within this torture that he instigated. Tension mounts, relationships are shattered and everything pans out pretty much as expected (which is to say, not well at all).

Parks has each of her characters deliver a soliloquy to the audience illuminating their pasts and presents, and though the actors in director Jaki Bradley’s production are all skilled and charismatic, there’s not one person on the stage whom I would count myself lucky to call a friend.

There’s no bold theatricality at work here, just strained reality and a conceit that continually reviews itself while it’s happening (everybody’s checking in with everybody about how everybody is doing). If the situation here is contrived, the emotions should be real and heightened, but they’re not. Parks toys with fluid sexuality but not in a way that would directly challenge (or augment) her central plot, and the heavy presence of bowling (beautifully realized by set designer Adam Rigg, who manages to create two apartments and a bowling alley out of one set, and sound designer Mikaal Sulaiman) is actually a drag. Bowling is just plain dull unless you’re the one smashing the pins.

There are moments here designed to outrage, shock and offend – not a surprise in a play about the “virus,” as Parks calls it, of racism. But this slightly amped-up sitcom needs bigger, bolder, even more outrageous moments to really register and to feel like this insular quartet is part of the American evolution that began in 1619 with the first the first sale of slaves on these shores.

If I had a choice, I’d rather see a play about Misha (especially as played by the dynamic Kelly). Her “Ask a Black” vlog is the best thing in the show. First it’s played for comedy, but the serious undercurrents grow stronger and stronger until her awakening (and the way she capitalizes on her friend and boyfriend becoming slave and master) becomes more interesting than Leo and Ralph’s increasingly troublesome experiment. I’m ready for her show about this show.