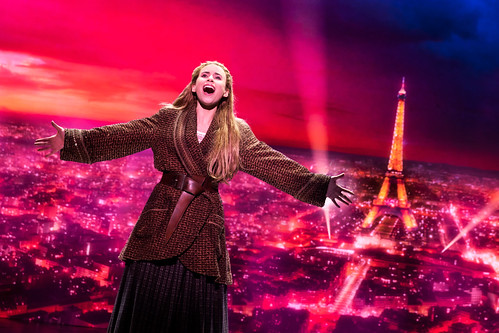 Lila Coogan is the central character in the national tour of Anastasia at the SHN Golden Gate Theatre. Photo by Matthew Murphy, Murphymade Below: Coogan’s Anya awaits her fate with Stephen Brower (bowing) as Dmitry. Photo by Evan Zimmerman, Murphymade


As much as we might like to think that the future of Broadway looks like Hamilton or Hadestown, I’m pretty sure the future looks more like Anastasia, the inconsequential musical based on the 1997 animated film (in turn based on the 1956 movie starring Ingrid Bergman) that is now touring the country. Given how uninspired this show is, the fact that it ran for two years on Broadway is surprising, but perhaps lukewarm rehashes are just what audiences want. There seems to be an endless supply.

The one bold feature of the show, the single element that seems to give the show life and a reason for being, is its heavy reliance on giant screens as set pieces. There are a few actual backdrops, but projection designs do most of the work, and it’s an element that to me feels like cheating. I’d rather have too little than too much in design, a reason to ignite the imagination rather than have video game-like images sliding past my eyeballs for 2 1/2 hours. That high-tech gimmickry is the only thing that indicates this musical emerged in the 21st century.

The touring production now at the SHN Golden Gate Theatre employs that flawlessly executed video design, but it overwhelms the actors, who are already struggling to make something of the halfhearted book by Terrence McNally and the surprisingly limp score by Lynn Ahrens and Stephen Flaherty. This musical team wrote the songs for the animated movie, and several of those songs, including the Oscar-nominated “Journey to the Past,” are highlights here. But the songs they’ve created to beef up the story are, for the most part, forgettable. Only a few of the new numbers come close to something interesting, and two of them involve the complicated feelings Russians have about their homeland and its turbulent politics. The first, “Stay, I Pray You,” is a wistful goodbye song at a train station as conflicted citizens reflect on their need to flee and their sadness at doing so. The other, “Land of Yesterday,” is sung by nostalgic Russian expats at a Russian club in Paris who delight in celebrating and bemoaning their homeland (while dancing and drinking vodka). 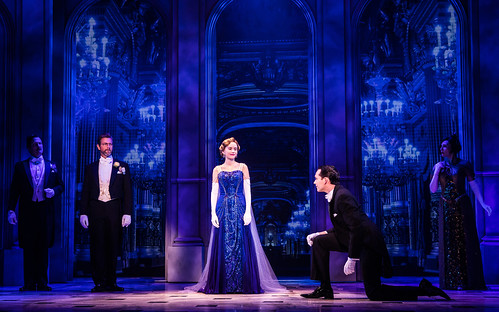 The bulk of the over-abundant score is bland except when it’s outright awful (ie, all the songs for Gleb, the bad guy Bolshevik). How is that possible from the team that created Ragtime, Once on This Island and A Man of No Importance, all gorgeous, poignant shows with emotional scores and catchy songs?

Director Darko Tresnjak, aside from relying too much on the big screens, seems content with skimming the surfaces of the execution of the Romanov family, Anastasia’s mysterious survival and the non-suspense of wondering if “Anya” really is the lost princess. There’s a love story that feels about as authentic as Russian salad dressing, and there’s a surprisingly bold rip-off of “The Rain in Spain” when two con-artists attempt to school a street sweeper in the ways of royalty so they can pass her off as the long-lost princess. During “Learn to Do It” I kept expecting Dmitry and Vlad to shout, “By George I think she’s got it!”

Amid all the derivative drivel, there’s a surprising bright spot in Act 2 when two secondary characters, Vlad and Lily, decide they’re doing a sketch on “The Carol Burnett Show,” and for the length of “The Countess and the Common Man,” it feels like we’ve entered another realm entirely, one where entertainment actually matters and the skills of the performers (Edward Staudenmayer and Tari Kelly) are put to effective use. Otherwise, we have sweet-voiced leads Lila Coogan as Anya-Let’s-Just-Call-Her-Anastaisa and Stephen Brower as Dmitry being sincere and feisty with 0% substance and just as much romantic spark.

What does this musical have to say to us? Try not to die when your family is executed? Amnesia is totally reversible? We all have conflicted feelings about our homeland? Digital sets are awesome? Princess dresses are pretty? Anastasia is the kind of theatrical venture that seems like an amiable cash grab: professional and (c)harmless and, except for the producers, completely unnecessary. As I said, the future of Broadway.