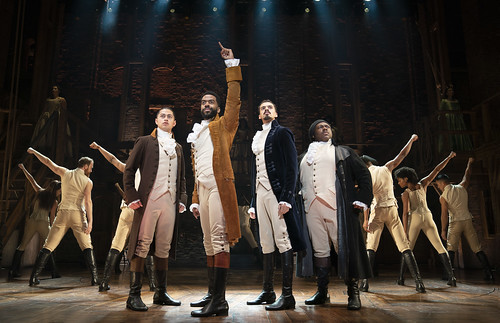 
If anything, the current company – known as the #AndPeggy company – of Hamilton now at the SHN Orpheum Theatre through Sept. 8, is even better than the one we saw at the same theater in 2017. Maybe it’s because this company got to perform for three weeks in Puerto Rico with the show’s creator, Lin-Manuel Miranda, reprising the lead role. Or maybe the Hamilton machine, with productions in New York, Chicago and London and with two other tours (currently in Tampa and Cincinnati), has just become so incredibly efficient that it has collected all the best performers in all the land(s).

You might expect that a property that burns as hot and bright as Hamilton does in our pop culture would crest and fade at some point. That may happen, but not yet. The custodians of this extraordinary musical are taking awfully good care of it and are not only preserving but also expanding on the work of Miranda, director Thomas Kail, choreographer Andy Blankenbuehler and orchestrator/arranger Alex Lacamoire. What that team created and what continues to unfold on stage is absolutely remarkable.

This is the third time I’ve seen Hamilton (original cast on Broadway, the first national tour launch in San Francisco in 2017 and now #AndPeggy company), and I feel like I could see 50 more times and still not absorb everything happening on that stage. It’s so easy to get caught up in the story of Hamilton and Burr weaving their narratives through the birth of a nation and tangling in their final dual that you don’t always notice what’s happening on the periphery in Blankenbuehler’s incredibly rich work for the ensemble or how Kail’s staging makes such effective use of the two turntables that you fall into the seamless flow of scene after compelling scene. [Just how intricate is the staging? Read this fascinating piece on the dancer who is known as #TheBullet.]

Miranda and company revolutionized musical theater by a) making the racial diversity of the cast so important that it seems there’s no other possible way to make good theater, b) merging history with the present in such a way as to make both more alive and more intricately connected that many of us realized and c) fusing hip-hop, rap, pop, R&B and musical theater in ways that are so vibrant and rich that other contemporary scores seem bland by comparison. All of that becomes even clearer on repeated viewings (and listenings, though the cast album only tells half the story because the visuals are so powerful).

Happily, Hamilton seems far from becoming a museum piece or something that can only be in the mold of the original production. In the performances especially, actors are given enough space to put their own spin on the characters. That’s where the #AndPeggy company really shines. Starting with Julius Thompson III as Hamilton, the performances are fresh and focused, and the chemistry among all the major players is electric.

Thompson brings all kinds of youthful enthusiasm to young Alexander, newly arrived in New York from the West Indies, one more immigrant who will get the job done (that lyric still gets a round of applause). He’s brash and confident and terrified and insecure – a sure recipe for success. As Hamilton makes friends and moves up through the ranks in the Revolutionary War, Thompson expands in the role, and by the time Hamilton is a battered politician, philandering husband and grieving father, there is a depth and ache that comes from maturity and harsh experience. Through it all, Thompson’s voice is glorious (all love to Miranda, but his distinctive voice is not his strongest suit).

Donald Webber Jr. as Aaron Burr is sly and quiet at first. He embodies Burr’s “talk less, smile more” philosophy, but when it comes to Burr’s ambition, which seems constantly thwarted by Hamilton, the actor releases a powerful fury. His “Wait for It” is the best I’ve heard, and his “The Room Where It Happens” dazzles in its show-stopping desperation.

We saw Isaiah Johnson as George Washington last time around, and he’s even better now. When Washington decides to step down from the presidency and enlists Hamilton’s help in writing his farewell address, it’s a moving moment. But Johnson lifts the number – “One Last Time” – higher and digs deeper, making it a show highlight.

This is basically a whole show of highlights, so there are too many to mention here. Just know that “The Schuyler Sisters” (played by Julia K. Harriman as Eliza, Sabrina Sloan as Angelica and Darilyn Castillo as Peggy) is as snazzy as it needs to be; King George III (Rick Negron) is as diabolically funny as he needs to be; and the boys – Brandon Louis Armstrong as Hercules Mulligan/James Madison, Rubén J. Carbajal as John Laurens/Philip Hamilton and Simon Longnight as Marquis de Lafayette/Thomas Jefferson – are a boisterous, funny, obstreperous and loyal.

I see something new and hear something new every time I see the show, and one thing that must be said about this company (and perhaps the sound system at the Orpheum) is that their diction is superb. Approximately 10 bazillion words fly by in this 2 1/2-hour show, and I heard more of them than I ever had before, which was thrilling. Miranda has become so famous for so many things at this point it’s nice to be reminded just what an inventive, intelligent and emotional composer he is.

Hamilton succeeds in abundant ways, but the thing that really got me this time was how our smart, squabbling founding fathers were really just winging it. Doing the best they could, relying on their educations, brandishing their egos, but never possessing absolute answers. The nation was a work in progress then and remains so today. That’s comforting…and terrifying. In Hamilton it would seem there is room enough for us all to figure it out. If only reality reflected one of our great works of art.

Daily #HAM4HAM ticket lottery
At each performance of Hamilton 44 tickets are made available at $10 each. Use the Hamilton app or visit hamiltonmusical.com/lottery to enter and to read all the details.