To commemorate a massive event, you can hang a plaque and make a speech. Or, if you’re a theater aritst, you create something so vibrant, so moving, so powerful that it will become a living memory rather than simply a remembrance.

That’s what Come From Away is: a testament to the horror of humanity – the terrorist attacks of Sept. 11, 2001 – and of the boundless kindness and compassion of humanity in the way a small Newfoundland community fostered 7,000 stranded air travelers for five days in the wake of the attacks.

You have to wonder why some stories are forced to be musicals, while others, like Come From Away, are born to be told in song. The events of 9/11 and its aftermath are already such a heightened experiences. Life was vibrating on a whole different level in those terrifying, maddening, heartbreaking days, so it makes sense to revisit that time with music, a language that goes beyond words and deals directly with emotion. In this particular story, a community of 9,000 people, which just happens to have one of the world’s biggest airports (from the days when jets had to refuel before continuing on to Europe) suddenly becomes a community of 16,000 people, and nobody knew how long these folks, who are “come from away,” would be stranded. So the town of Gander and its neighboring communities pulled off an extraordinary feat of hospitality, providing shelter, food, drink, phones/Internet, clothing and entertainment for people from around the world, many of whom did not speak English. Nothing tells the story of community and creating community better than singing – voices joined to create a big, emotional, often joyous sound. This is a story that needs to sing, and composers Irene Sankoff and David Hein (who also wrote the book) have done a beautiful job giving the story heart and melody and a propulsive Celtic pulse that keeps the 100-minute show moving at an extraordinary (but never rushed) pace. 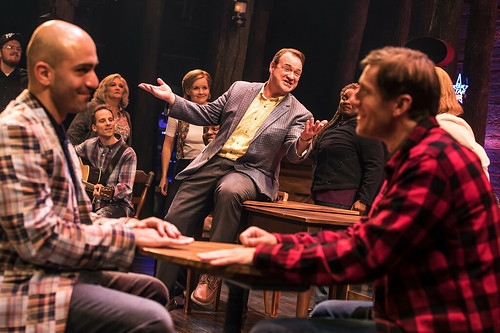 Already a long-running hit on Broadway, Come From Away is now making its way around the country. The touring company at the SHN Golden Gate Theatre is extraordinary. A dozen performers play the passengers and the townsfolk with astonishing ease and remarkable versatility with just the shift of an accent or a small bit of costume (designs by Toni-Leslie James). The clarity of the storytelling never fails to delight, and credit must go to director Christopher Ashley and musical stager Kelly Devine for keeping the action in constant motion but never making it feel slick or mechanical.

There’s a danger when dealing with kindness of dipping into sentimentality, a lapse Come From Away never makes. The Newfoundlanders, who sound a bit like the Irish of Canada, are depicted as characters full of pride in their rocky, rural outpost where everybody knows everybody. There’s some of “Northern Exposure” quirkiness to them, but what really comes through is salt-of-the-earth people who, when called upon, provide extraordinary service in an international emergency.

This is such an ensemble show it’s hard to single out performers because each is vital to the whole, a constant stream of movement to create a sense of place (stuck in the airplane for 28 hours, at a scenic overlook, in a grungy bar) with only chairs, a turntable in the floor of Beowulf Boritt’s set and the occasional neon sign to create some beautiful stage pictures as one scene seamlessly blends into another under Howell Binkley’s ever-shifting lights.

The closest we get to a central character is American Airlines pilot Beverly Bass played by Becky Gulsvig, a strong leader show is, unbeknownst to her passengers, shaken to her core that the thing she loves most in the world – airplanes and flight – have been used as a bomb. Gulsvig is stellar, and her big solo, “Me and the Sky,” is a show highlight. Each cast member has multiple memorable moments, whether it’s Christine Toy Johnson as Texan Diane and Chamblee Ferguson as Brit Nick falling in love despite their (or maybe because of) their most unusual circumstances or Nick Duckart playing the cranky half of a gay couple and an Egyptian chef named Ali who finds himself the object of other passengers’ fear and anger.

There’s a marvelous moment when James Earl Jones II as Bob muses that when people ask him about his ordeal and his time in Gander, they wonder if he’s OK. His response, which is tinged with guilt, is that he was more than OK – he was the best he’s ever been. That captures the spirit of this story: how something horrible became something positively life-changing because people shared their better selves with one another.

There’s an amazing amount of humor in this sad, uncomfortable story – of course there’s a moose joke – and that doesn’t at all detract from how moving it can be. There’s also a simple scene of prayer, where Christians sing a hymn, a Jewish man sings in Hebrew, a Muslim man prays and others join in their own ways. Not many musicals this side of Fiddler on the Roof attempt to find beauty and solace in depicting spirituality, but then again, not many musicals have the heart-bursting power and foot-stomping joy of Come From Away.