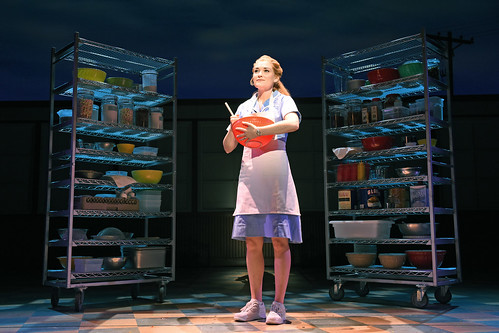 Christine Dwyer is Jenna, a pie-making genius and a troubled wife in the musical Waitress at the SHN Golden Gate Theatre through Nov. 11. Below: Jessie Shelton (left) is Dawn, Dwyer (center) is Jenna and Tatiana Lofton is Becky (a role now played by Anastacia McCleskey) in the national touring company of Waitress. Photos by Tim Trumble


Waitress is very much like one of the wacky pies its title character concocts – an odd combination of ingredients that come together in a surprisingly delightful way. As a musical, it’s about ordinary life – low-paying jobs, abusive relationships, childhood trauma, the families we make as opposed to the ones we’re born into – but it sings, often beautifully, about the deep pain and the little joys of everyday living, and it finds ways to make the ordinary soar with lyricism and expressive movement. In the hands of director Diane Paulus, it’s all so heartfelt and compassionate that it works in quite a satisfying way.

Based on the 2007 indie movie written and directed by the late Adrienne Shelly, Waitress captures the sad charm of the movie, much of which comes from the wholly delightful score by pop star Sara Bareilles. When people join voices in this show, it means something. Their harmony resonates at levels both musical and emotional, which isn’t always the case in musicals. For instance, as the lead character, Jenna (Christine Dwyer) and her coworkers Dawn (Jessie Shelton) and Becky (Anastacia McCleskey) clean tables and wrangle condiments in preparation for the breakfast crowd at the diner where they work, they sing “Opening Up” in a dynamic arrangement that serves up energy and personality. Later in Act 1, the co-workers, who are also close friends, sing “A Soft Place to Land,” which replaces all that energy with wells of emotion and connection.

Jenna finds herself in a predicament: she’s pregnant by Earl (Matt DeAngelis), the abusive husband whom she cannot escape. It’s a relationship, we see in dreamy/nightmare-y flashbacks, not unlike the one between her late mother and father. Jenna doesn’t have the money or resources to escape, and now, with a baby on the way that she really does not want, she feels even more trapped. It’s no wonder, then, that the secret garden into which she escapes is her pie baking. She gives her unique concoctions fun and funky names like “Betrayed By My Eggs Pie,” “Marshmallow Mermaid Pie” and “A Little Wild, Wild Berry Pie” and customers go crazy for them. The pies are a link to her mom and to a safe place of creativity and positivity and a feeling that she matters in a world where she often doesn’t recognize herself. Her mantra, repeated often in the show’s 2 1/2-plus hours, is “sugar, butter, flour.” That’s a tasty mantra. 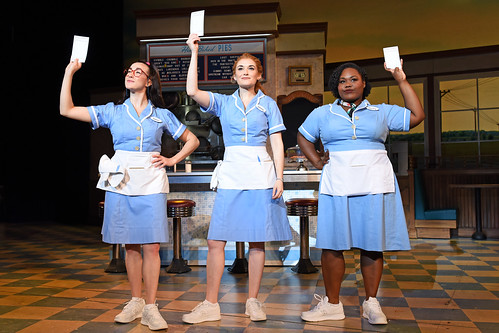 That’s the real plot of Waitress – Jenna discovering herself and her worth. She has to conquer Earl, figure out how to be a mom and sort through the complicated feelings of having an affair with her gynecologist, the goofy Dr. Pomatter (Bryan Fenkart), who is also married. The heart of the musical is in the gorgeous ballad “She Used to Be Mine,” sung by Jenna as a letter to her unborn child attempting to describe who she is. Dwyer’s performance throughout is sensitive and emotional, but for this number she pulls out all the extraordinary stops.

The nice thing about Jessie Nelson’s book is that though Jenna’s story is the centerpiece, her friends are on their own evolutionary tracks. The quirky Dawn reluctantly falls for the aggressively odd Ogie (Jeremy Morse in a comedically inspired, physically deft performance), and their nerd love is played for laughs but never makes fun of them. And the married Becky embarks on affair of her own, and when Jenna (also, as a reminder, having an affair) seems to judge her for it, Becky delivers a powerhouse “I Didn’t Plan It,” which argues that there may be more room in love, fidelity and lust than we know. Choreographer Lorin Latarro imbues the movement with humor and dreaminess and a sense of finding – or feeling – the extraordinary in the ordinary.

And then there’s Joe (Larry Marshall), the diner’s eccentric owner who likes his sliced tomato on its own plate. He’s curmudgeonly but has a soft spot for Jenna. He’s a frank talker, and his one song, “Take It from an Old Man,” could be a throwaway little moment, but it’s not. It’s got the same kind of sass and dignity and heart that makes this show special.

By the way, if fans of 1970s television find this diner arrangement similar to “Alice,” well, that’s OK. Jenna is Alice, Dawn is Vera, Becky is Flo and Cal (the gruff chef, played by Ryan G. Dunkin) is Mel. It’s a structure that works just as well for comedy as for drama so why mess with it?

Waitress is a show that loves its characters, flaws and messes and all. There’s a sense of community that lives here – which even applies to the band, which is on a stage in the diner on Scott Pask’s perfect set – and it’s all warm and comforting. “Sugar, butter, flour.” We really are all in this together. How nice to be reminded in such a wonderfully musical, soul-satisfying way.

[bonus interview]
I talked to Sara Bareilles for a feature in the San Francisco Chronicle. Read the story here.