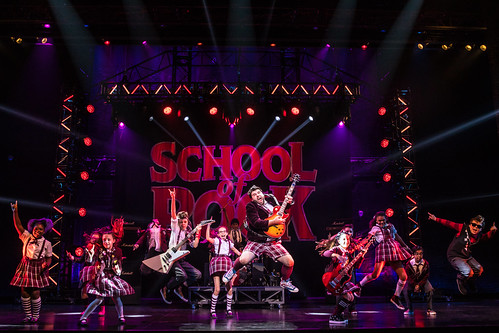 The cast of Andrew Lloyd Webber’s School of Rock, at the Orpheum Theatre – the national tour is part of the SHN season through July 22. Below: Theodora Silverman is Katie, the bassist, and Rob Colletti is Dewey Finn, the fraudulent substitute teacher. Photos by Matthew Murphy

This grand-scale musical adaptation of the 2003 movie hit (screenplay by Mike White, direction by Richard Linklater) makes a lot of sense as far as movie-to-musical projects go because music – and a lot of it – is built right into the story of a baby-man who fakes being a substitute teacher at a private school and turns around the lives of his students by helping them form a rock band. It’s just kind of funny that this “rock” musical is the first hit for Lloyd Webber in a lot of years (looking back to Sunset Boulevard in 1993), and he is not exactly the musical persona who comes to mind when you think “stick it to the man” rock ‘n’ roll. Lord Lloyd Webber pretty much IS the man these days (meow), but he’s definitely in fun ALW mode here – think Jesus Christ Superstar meets Starlight Express.

Still, it’s telling that two musical highlights of the show involve “Amazing Grace” and grownups singing along with Stevie Nicks’ “Edge of Seventeen,” while the Lloyd Webber originals (with lyrics by Glen Slater) range from enjoyable (“You’re in the Band,” “Stick it to the Man”) to not so much (“Where Did the Rock Go?” “When I Climb to the Top of Mount Rock”). 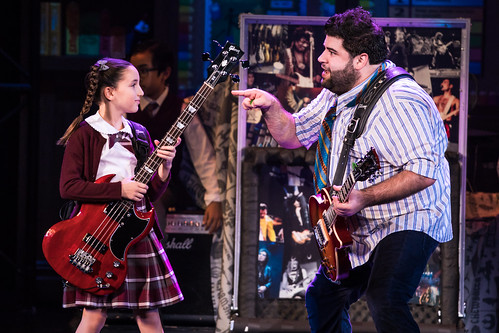 I suspect School of Rock sells tickets on the basis of two things: the leading performance by whomever is playing Dewey Finn in the key of Jack Black (who created the role in the movie) and the dozen or so amazing kids who sing, dance, act and play their own instruments.

Rob Colletti is a robust Dewey Finn, and he’s got the Jack Black comic cadence down pat. He’s an enthusiastic singer/musician, though I found him on the lower end of the charm scale. And charm is kind of important so that Dewey doesn’t come across as a total creep who betrays his best (and only friend) by stealing the substitute teacher gig right out from under him and then continually lying to him about it. It’s also creepy that Dewey shows up at a school and is, without any question, allowed into a classroom, even when he tells the principal (a crisp Lexie Dorsett Sharp as Rosalie Mullins) to make his paycheck out to “cash.” Talk about red flags. And in short order, he’s stealing $10 from a student, yelling at students and attempting to send students off campus unsupervised. In Act 2 we even get – wait for it! – the requisite pedophile joke. Hilarious.

No, it’s really all about the kids, and they should have more to do of substance. The young performers are so appealing, they make us practically forget the clichés and stereotypes that riddle the book by Julian Fellowes (of Downton Abbey fame).

Watching kids play keyboard, guitar and bass is exciting – much more so that watching the plot creak along with depictions of parents as monstrous, neglectful idiots – but the show never gives them a showcase as sharp and funny as Matlida or as tenderhearted and sweet as Annie. These young performers look like they’re having a blast (and it is probably a hoot for kids in the audience to watch their peers rock out), but they deserve a better show than this faux-rock fizzle.