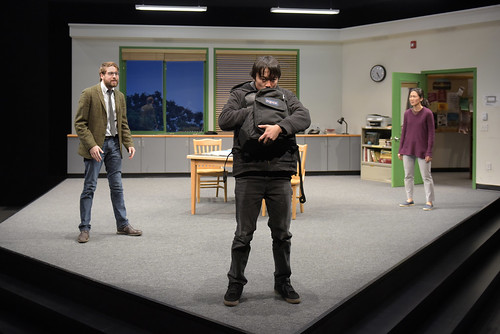 
Julia Cho is exactly the kind of playwright I crave. She’s thoughtful, adventurous and fanciful in a way that relates directly to reality (she’s not a fantasist – her flights mean something in the day to day). She cares about people and their messes, both internal and external. Her Aubergine at Berkeley Repertory Theatre was a revelation (read my review here) and has become one of my favorite plays in recent memory.

Her play Office Hour, now at Berkeley Rep’s Peet’s Theatre, is a thorny piece of work. It’s about gun violence, but it’s an intimate exploration of the subject with a teacher attempting to connect with a troubled student who could turn out to be the kind of campus shooter we’ve seen way too much of in recent years.

There’s something contrived-feeling about this play, and that surprised me, until after I thought about it on the way home. This is not a slice of realism, a documentary, an editorial on the heartache of unrestrained gun violence in our bullet-happy nation. It’s a writer using writing to pick apart something painful and complex. The play is about writers and revels in the notion of writing as an equation through which we work out the mathematics, geometry and physics of existence, but with grammar, deep thought and agony.

I continue to be impressed by the intelligence and straightforward sensibility of director Lisa Peterson, Berkeley Rep’s artistic associate. You know when she’s at the helm of a show, she’ll provide a conduit into the heart of the play itself and not her gloss on it. She’ll bring to bear whatever the play requires without the kind of directorial flourish that wants to push aside author, actors and designers to reveal the director as the true maestro of the stage. Peterson is the kind of director you can count on to reveal rather than obfuscate.

Even though this is quite a serious play, I appreciated the moments of humor when they pop through. I especially liked one character’s take on the pitfalls of marrying someone whom you claim is your best friend: “If you marry your best friend, you have one less important person in your life than you should.” Perhaps a full-blown comedy could be in Cho’s future? I hope so. But I’m there for whatever comes next, laughs or not.

I reviewed Office Hour for Theatermania.com. Here’s an excerpt:

The parallels Cho forces her characters to face boil down to the simple desire to connect. A writer, even a strange one like Dennis, wants to be noticed, wants the work to be appreciated in some way. His “terrorist” act isn’t an attempt to hide, as Gina points out, but a costume to make him noticed. So writers and a potential “classic shooter,” as Dennis is described, have something in common: They want connection. 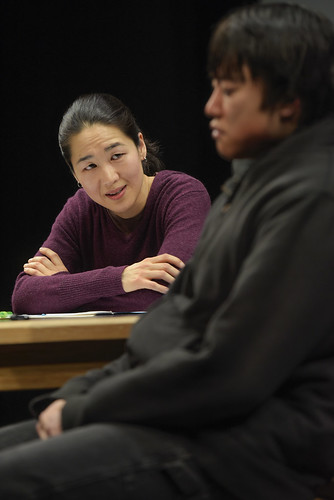