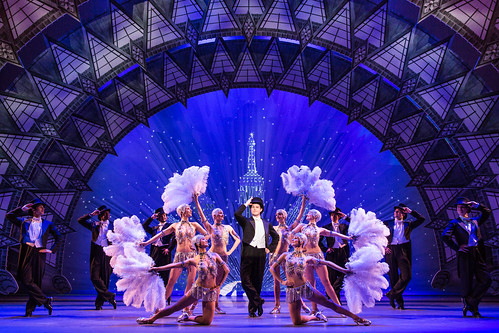 The touring company of An American in Paris, based on the 1951 movie of the same name, dances into the Orpheum Theatre as part of the SHN season. The score features glorious work by George and Ira Gershwin as well as choreography and direction by Christopher Wheeldon. Photos by Matthew Murphy


The highlight of the 1951 movie An American in Paris is the glorious 17-minute ballet at the end featuring Gene Kelly and Leslie Caron dancing through an artist’s version of Paris (think Renoir, Rousseau, Toulouse-Lautrec) to the strains of the glorious horn-honking title composition by George Gershwin. Movie musicals have rarely been so transporting, especially in the seamless blend of classical and modern dance with musical theater.

Given that the movie has become a beloved classic, it makes perfect sense that the Gershwin estate would want to capitalize on the score and keep it alive in a new stage adaptation. Much like they did with Crazy for You (and to a lesser extent with Nice Work If You Can Get It), the idea would be to fold in other songs by George & Ira Gershwin to create a whole new property.

The resulting show, adapted by writer Craig Lucas and directed and choreographed by a member of ballet world royalty, Christopher Wheeldon, is a decidedly uneven affair. It wants to be part serious musical (the darkness of Paris after World War II and the Nazi occupation), part musical comedy (three guys in love with one girl!) and part contemporary and ballet dance show. Call it a ballet-sical (mullet doesn’t quite work). Whatever it is, it doesn’t quite work.

After a short tryout in Paris, An American in Paris opened on Broadway in 2015 and ran for about a year and a half before embarking on the national tour that brings the production to San Francisco’s Orpheum Theatre as part of the SHN season.

It’s a handsome production thanks to some beautiful, evocative sets and costumes by Bob Crowley and gorgeous lighting by Natasha Katz. There are abundant, mostly unnecessary projections (by 59 Productions) that don’t bring a whole lot the soirée other than a sense that we’re watching a 1940s version of Inception, but when they work, as with the sparking light on the waters of the Seine, they’re lovely. Crowley really gets to let loose in the big production number for “I’ll Build a Stairway to Paradise” with a dazzling art deco fantasia on the Chrysler Building that underscores the evening’s most thoroughly enjoyable musical theater experience. 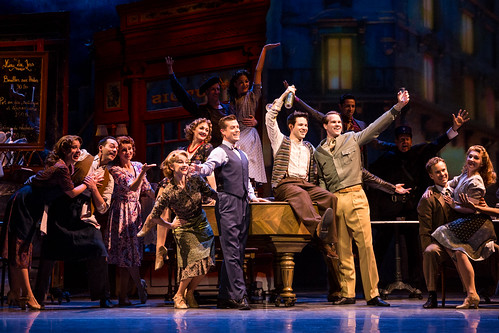 The show’s opening, set to “Concerto in F,” indicates that this is going to be something special. With a grim color palette and intricate choreographic storytelling, we are immersed into the world of post-war Paris, where denizens are slow to emerge from the Nazi oppression and the general horror of the war. There’s violence, cruelty and grace woven into this rather startling prologue. But then we get into “I Got Rhythm” and introduction of the characters, so we shift right into musical theater mode trying to replicate the ebullience of Crazy for You choreographer Susan Stroman and coming up short.

There’s a sloppiness to this production that affects the acting – don’t even ask about the French accents – and the singing and even some of the dancing.

The revised book shifts the action from the Paris art world into the ballet world, which makes sense so there can be more dancing, but characters are under-developed and relationships are cursory at best. The bright light of the cast is Sara Esty as Lise Dassin, a ballet dancer who catches the eye of two Americans (McGee Maddox as GI Jerry Mulligan and Stephen Brower as composer Adam Hochberg) and one Frenchman (Nick Spangler as Henri Baurel), who all, conveniently, end up being buddies. There’s another brash American, Emily Ferranti as moneyed Milo Davenport, who attempts to grab the spotlight occasionally, but it’s Esty’s Lise who dances away – literally – with the nearly 2 1/2-hour show.

She’s a strong actor, singer (her “The Man I Love” is charming) and dancer, which is a tall order, and not one others match as gracefully or forcefully as she. Her performance in the “An American in Paris” ballet, which here is presented as a ballet company’s dance performance and not as a Parisian fantasy, is absolutely beautiful.

And there’s just no escaping the fact that Gershwin songs and music can carry an evening no matter what else is going on. “But Not for Me,” “They Can’t Take That Away from Me,” “I Got Rhythm,” “S’Wonderful” – it’s a feast of great American songwriting. And then you’ve got more classically leaning pieces from George – “Second Prelude,” “Second Rhapsody/Cuban Overture” and, of course, the title piece, and you just can’t lose. Rob Fisher’s arrangements (with orchestrations by Christopher Austin and Bill Elliott and dance arrangements by Sam Davis) work hard to make a 14-piece band sound like a symphony orchestra or a jazz band and mostly succeed.

The details of this stage American in Paris may not linger, but the beauty of its design and the glory of its music are here to stay.