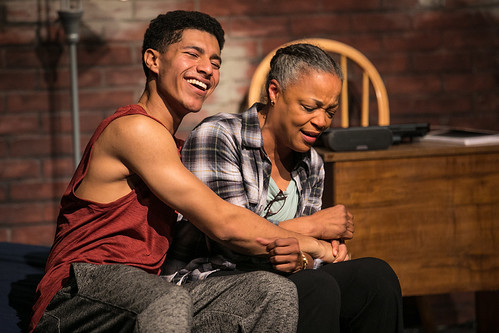 Davied Morales is Tray and Cathleen Riddley is Lena in the Shotgun Players production of brownsville song (b-side for tray) by Kimber Lee. Below: Morales’ Tray has an uncomfortable meeting with someone from his past (Erin Mei-Ling Stuart as Merrell). Photos by Cheshire Isaacs


The desperate craziness of our times has desensitized us to the reality behind the headlines that bombard us from every screen and feed and page. The level of injustice, death and willful cruelty reported on a daily basis, if you try to take a step back and really look at it, is staggering. Our desensitization is a survival tactic to be sure – could we spend every waking hour enraged or in tears? Absolutely! – but there’s a cost when we lose sight of the individuals whose lives are told in fragments on the news. We are removed from their lives and our connection to them, and news is just news (most of it bad to awful to grotesque) and not filled with actual human beings.

Playwright Kimber Lee’s brownsville song (b-side for tray) offers a poignant reminder that our grim news feeds are built from lives, not just of victims and perpetrators and garbage politicians. There are the lives of the people whose names are in the news as well as the lives connected to those lives and the ripples that overlap with ripples that overlap with ripples.

First developed in San Francisco by the Playwrights Foundation, brownsville went on to productions at the Humana Festival and Lincoln Center. Now the play is back in the Bay Area courtesy of Shotgun Players with a production beautifully and sensitively directed by Margo Hall, whose work behind the scenes is proving to be as powerful as her onstage work as an actor, which is saying quite a lot.

Time is fluid in brownsville, named for the rough Brooklyn neighborhood in which it takes place. We begin after the tragedy. A promising young man, Tray, has been gunned down on the street. He was not part of a gang or a crew. He wasn’t involved in illegal activities. He had overcome numerous obstacles in his 18 years – an absent mother, a father murdered on the streets, a stepmother who abandoned him and his little sister, scuffles with the law when he was younger. But with the ferocious support of his grandmother, he had pulled his life together. He was doing well in school, he was disciplined about his boxing, and he was full of love (and sass) for his family.

He was also in the wrong place at the wrong time. 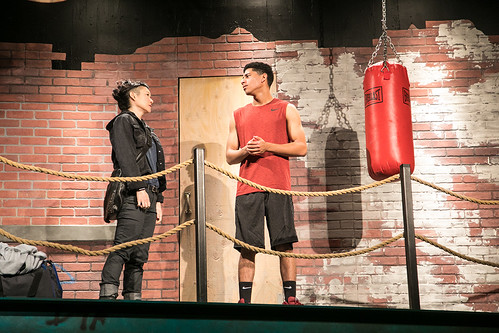 The first voice of the play comes from Lena, Tray’s paternal grandmother. Played by Cathleen Riddley, she is impossible not to love and admire (and fear just a little bit). She tells us not to start the story with her. She’s not the beginning, she’s the end, and Tray was not just another story. He’s not just another victim you may or may not hear about on the news or a faceless statistic about gun violence in this country. He was simply himself, and you can feel through Riddley’s quiet, undeniably powerful performance, just how profound his loss is.

Through a series of flashbacks, we meet Tray who was, as his grandmother puts it, “semi-reliable about everything but his little sister and boxing.” Played the charismatic Davied Morales, Tray is a light. He’s not a saint but a believable teenager – intelligent, rebellious, bursting with energy – who does well in school, holds down a job at Starbucks, helps out with Devine, his little sister, and trains and competes in an amateur boxing circuit. Like Riddley, Morales is a powerful presence as Tray. He and Riddley are the motor and the fuel of this 90-minute play. Together, they are the cycle of hope and grief and hope that makes this experience so potent. Tray was fighting to not just be another hard-luck story of a kid from violent street, and we have every reason to believe he would continue shining brighter and brighter.

Playwright Lee can tend toward the cliché in her writing, but director Hall and her strong cast tend to circumvent any mawkishness and head for something more honest. Erin Mei-Ling Stuart is a believably complex person from Tray’s past who, after her own difficulties, is attempting to make better choices, and 11-year-old Mimia Ousilas is Tray’s little sister. There’s a lot she could be sad about, and she is, but she also supplies some of the play’s lightest moments when she fails to blend into the background as a weeping willow in her dance class production of Swan Lake. William Hartfield as Junior, a neighborhood friend of Tray’s, at first seems to be trouble, but a later scene between him and Lena reveals layers and history and emotion that renders the character in a different light.

And therein lies the power of brownsville. Here, in flesh and blood, is a reminder to look and think and feel beyond headlines and statistics, as hard as that may be. This poetic, sometimes elegiac play – with straightforward, effective design by Randy Wong-Westbrooke (set), Allen Willner (lights), Joel Gimbell II (sound) – cuts right to the heart of why the life of someone you don’t know matters and how our unjust, violent, crazily complicated culture can encourage us to think we’re disconnected from one another when exactly the opposite is true.