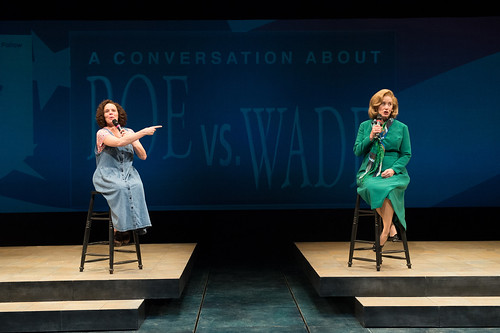 
There is so much event and detail in Lisa Loomer’s Roe – a brisk re-telling of the events and people involved in the landmark 1973 Supreme Court case Roe v. Wade – that it feels like the world’s speediest documentary, something you could only do on a mostly open stage, with actors making their costume quick changes in full view of the audience just so they can keep up. And by attempting to cover the (still unfolding) arc of the case, so much happens that, if it wasn’t actually true, you’d never believe it.

Originating from the Oregon Shakespeare Festival’s impressive new play generator, American Revolutions: the United States History Cycle, Roe debuted last year at the OSF in Ashland, Oregon before the election, then headed to the Arena Stage in Washington, D.C., just after the inauguration. Now this docudrama has landed at Berkeley Repertory Theatre, and we’re in a changed world, a charged world. Fear of losing rights, fear of losing immigrants, fear of environmental catastrophe, fear of detrimental change to core functions of the government (education, health care, you name it) – so much fear fuels anger and protest and anxiety. All of that to say that the nearly 50 years covered by the play feel familiar and even prescient. It seems we’ve been repeating ourselves for decades.

One immediate impression in the aftermath of Roe is that we talk a lot about what a divided nation we are today, but watching all the fights surrounding the issue of abortion make it clear we have been a deeply divided nation for a very long time, and there are few issues that expose the painful division more than abortion. Are we, as some of the anti-choice demonstrators claim, founded as a Christian nation and therefore all subject to the demands of a Christian God? Or are we a nation founded in liberty in which a woman, regardless of of religion, is free to make choices about her own body herself?

Even after the Supreme Court sided with choice in 1973, the battle has waged – on the streets as groups like Operation Rescue resort to violence and bullying and in the courts as states make “legal” abortion almost impossible to attain. As Loomer’s timely play points out, the saga continues as the next four years could see history reversed where Roe v. Wade is concerned. Loomer was even able to adjust the play to reflect McCorvey’s death last month (at age 69), just as the run was ending at the Arena. 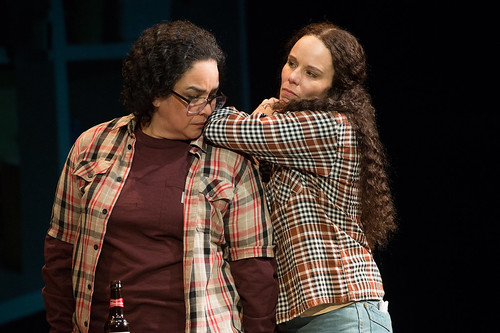 Is Roe a vital, fascinating, beautifully produced history lesson with immediate impact? Absolutely. Loomer’s attempts to tell a reasonably objective version of the story is not only admirable, it’s heroic. Her two main characters, Norma McCorvey (who was re-named Jane Roe to protect her anonymity in the case) and lawyer Sarah Weddington, both wrote books about their decades-long involvement in the famous case, and their facts don’t always agree. So Loomer, using a loose, highly presentational style, frequently breaks the fourth wall to point that out. This style, executed with efficient gusto by director Bill Rauch and his strong ensemble, also allows for speed in the storytelling and the efficient manipulation of time. Characters are able to tell us about what happens to them in the future (often by relating details from their obituaries), and characters who never met in real life are able to acknowledge that but have a stage interaction anyway.

From the time Weddington and McCorvey meet in the early 1970s until their last personal encounter in the mid-’90s, Roe tracks their predictable/unpredictable arcs. Weddington is a dedicated lawyer, politician, teacher and activist who continually fights for her most famous case. McCorvey, on the other hand, begins in a rough place and continually encounters difficulty. Married young to an abusive husband, she eventually comes out as a lesbian and loses her daughter to her disapproving drunk of a mother. Norma lives a freewheeling, free-love lifestyle that involves drugs and drink and living in the park with the hippies, and when she meets with young lawyer Weddington, what she really wants is an actual abortion and not a landmark case that will go from Texas to the Supreme Court.

Weddington, a feminist activist and ambitious lawyer, was looking for a way to fight the abortion ban, and McCorvey was the right pregnant woman at the right place at the right time. Loomer works hard to keep a balance between the political/moral debate and the human cost of the fight on the choice/anti-choice battlefield. There’s not a lot of time for rich character development, so this isn’t a deeply emotion experience, but what it lacks in that area it more than makes up for in the way it offers clarity amid complicated history and reveals, amid the specific details, how being human will always hinge on fear and its progeny: anger, righteousness and gargantuan need.

As Norma, Sara Bruner beautifully conveys instability, spark and a survivor’s strength that belies tremendous emotional fragility. When Norma becomes an abortion-renouncing born-again Christian later in her life, that change, while somewhat startling, is understandable. Her journey is full of life events, while Weddington (played with intelligence and hauteur by Sarah Jane Agnew) is on hand to provide a more academic perspective and, as she keeps saying, context.

Oddly, the real emotional heart of the story belongs to a peripheral character, Connie Gonzalez, Norma’s longtime girlfriend. Played by Catherine Castellanos, one of the Bay Area’s finest actors, Connie is understated but solid, and she, more than any other character here, represents the emotional cost of the story behind Roe v. Wade. When Norma renounces her past life to embrace Jesus, she’s essentially rejecting her lesbian past as well. Connie’s broken heart, so powerfully rendered by Castellanos, is shattering.

Other memorable turns come from Jim Abele as charismatic Operation Rescue head Flip Benham, Amy Newman as, among others, Gloria Allred and a compassionate anti-abortion worker and Susan Lynskey as attorney Linda Coffee, a reliable source for wry observations.

There’s a great sense of living history to Roe, an illumination of lives and laws and liberties that cannot be taken for granted. It’s also a play whose ending feels like it may never come.