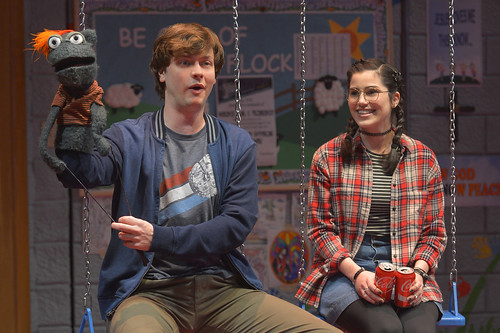 
Hand to God is just the spiritual exploration we deserve at this point in our sordid human existence. Imagine if the current administration reimagined “Sesame Street” in its own twisted, greedy, egocentric, power-mad image and you might get something like Robert Askins’ hit play now at Berkeley Repertory Theatre’s Peet’s Theatre.

In a small Texas town, the Lutheran church becomes the epicenter for that most human of showdowns: between good and bad, right and wrong, authority and anarchy, virtue and sin, reality and fantasy. Or, to put it more simply, between humans trying to live a higher version of themselves, however illusory that life may be, and those who reject the illusions and revert to the rutting, stinking neanderthals we really are.

To pitch this epic battle about the very core of humanity, Askins gives us a dirty, bloody, raunchy puppet show that begins in the seemingly most innocent of places: the church basement where Margery, a recently widowed mom, is attempting to distract herself by starting a puppet ministry for the congregation’s teens. There are, however, only three members of her rather pathetic group: her son, Jason, and the girl he’s been crushing on for years, Jessica, as well as the church’s surly rebel, Timothy, whose alcoholic mom attends meetings of an anonymous nature at the church.

We know that Jason’s puppet, whom he calls Tyrone, is going to be a major character because Tyrone opens the show (from the church’s puppet theater, naturally) with a mash-up of homily and stand-up routine about why man created the devil. The more we learn about Tyrone, the more it becomes clear that he might be the devil himself as he morphs from cute-ish hand puppet singing “Jesus Loves Me” to Gremlin with sharp teeth, blood lust (and every other kind of lust) and apparent telekinetic powers. 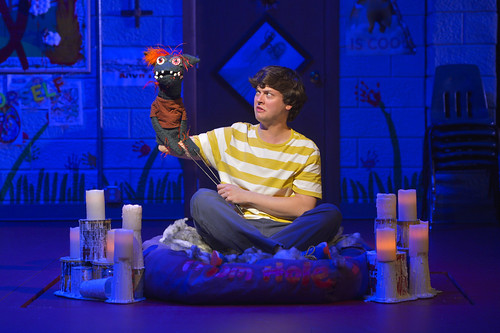 Therein lies the fun of Hand to God, which began life off Broadway in 2011 and hail Mary’d its way to Broadway in 2015: we watch a small community of Christians come unglued by an aggressive hand puppet that might be a demonic possession or it may just as easily be the schizophrenic ravings of a troubled teen whose dad just died. It doesn’t take much of a satanic tip to sending Margery (a sweetly ferocious Laura Odeh) tumbling from the pulpit. She figures out pretty quickly that the puppet ministry idea was really just a ploy by Pastor Greg (David Kelly doing a nifty male version of Dana Carvey’s Church Lady) to get her to date him. Nothing like using the power of the church to get laid. Happily for Timothy (Michael McIntire), he’s in the right place at the right time when Margery decides to strip away the pretense of being devout (her shredding of a Bible is perhaps more startling than her sexual shenanigans).

Michael Doherty brings a sweet, blinky reserve to Jason that contrasts nicely with the raunchy spewing of Tyrone, the Muppet-y creature that is slowly taking over his life and giving him an actual personality. Doherty’s whirligig performance is the spinning center of the show, and he’s terrific under the fast-paced direction of David Ivers.

There’s a lot of laugh-out-loud moments in this quick 85-minute, two-act show as well as abundant gasps. If you thought the puppet sex in Avenue Q was raunchy, the only way to describe the puppet sex here (performed by Doherty and Carolina Sanchez as Jessica) is downright hardcore. As with any dark night of the human soul worth its salt, there will be blood. And violence and destruction. And, to reiterate, laughter.

But they are dark laughs to be sure. This is wild, subversive stuff, and while the humor and destruction of Jo Winiarski’s set are high in entertainment value, there are disturbing elements at work here, especially the notion Tyrone puts forth that our constant search for saviors leads us ever into wrong places and perhaps the person we think least likely to save us is exactly the right person. At this particular moment in time, that concept is absolutely terrifying. Give me Tyrone any day.