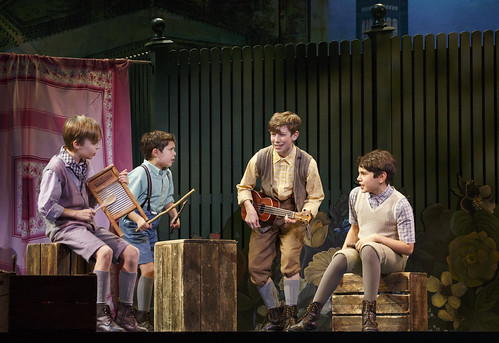 
I’m calling it: the use of Peter Pan as an automatic trigger for poignant reflections on lost youth and the emotional cruelty of aging is officially over. It’s been over for a while, but no one told Sarah Ruhl, whose For Peter Pan on Her 70th Birthday (read review here) got the hook at Berkeley Repertory Theatre last year. We have exceeded the Pan threshold.

That’s unfortunate for the musical Finding Neverland, based on the 2004 movie of the same name starring Johnny Depp, Kate Winslet and the remarkable child actor Freddie Highmore. This story behind the story of how author J.M. Barrie came to write Peter Pan worked much better on screen than it does in the bland Diane Paulus-helmed production that opened Wednesday night as part of the SHN season.

The Broadway production of Finding Neverland didn’t exactly alter the course of musical theater in any way, but it seemed to make audiences reasonably happy, and that can also be said of the general feeling at San Francisco’s Orpheum Theatre on Wednesday night. But from the opening scene, where a theatrical troupe is performing Peter Pan, I knew my Pan fatigue was going to prevent me from really enjoying this middling enterprise.

The score by British pop star Gary Barlow and Eliot Kennedy disappoints from the start (“Welcome to London”) and then lurches from unremarkable ballads well-suited to televised singing contests to derivative ensemble numbers that at least get a little spark from the muscular choreography by Mia Michaels but fade from memory the minute they’re over.

The story of a story isn’t inherently interesting, even if that story is Peter Pan, and this telling relies so much on stereotype (Actors are quirky and egotistical! British people are snobs! Dying women are noble and without character!) that the only depth comes from the actual size of the stage. 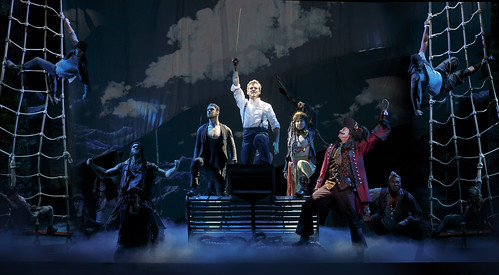 Without much to work with in terms of script (by James Graham, based on a screenplay by David Magee, which is in turn based on a play by Allan Knee), the performers work with all the professional gusto they can muster to sell this undercooked baked potato of a show. Aside from some godawful mugging among the ensemble, they manage an admirable level of energy and appeal.

Kevin Kern as Barrie has leading man appeal and a pleasant voice, but his character has no apparent conflicts. His answer to a creative block is to just steal from rambunctious neighborhood kids he befriends in the park (one of the kids asks if he will get royalties and isp promptly shushed). His romance with the children’s mother (Christine Dwyer) would be Hallmark perfect if it weren’t for that pesky cough and those spots of blood on her handkerchief. She’s a one-dimensional character, and her big song, “All That Matters,” does nothing to change that.

Tom Hewitt blusters through his role as American theater producer Charles Frohman but really comes to life when he plays Captain Hook at the end of Act 1 (“Hook”/”Stronger Part 2”).

The real spark of the show comes from the young actors playing the four Llewelyn Davies children. At Wednesday’s performance, the roster included Finn Faulconer as George, Ben Krieger as Peter, Mitchell Wray as Jack and Jordan Cole as Michael. In Act 2, the brothers put on one of Peter’s plays (“We’re All Made of Stars”), and it’s by far the best song and scene in the show, with a natural charm and humor that eludes pretty much everything else before or after it.

Just when you think the show will submerge itself into mawkish dreck when all the poppy, bouncy machinations have to shift into a more serious gear, Paulus, whose directorial ambitions here seem wasted on a show that has seemingly no ambition at all, delivers a sparkly, breezy bit of stagecraft. The moment feels surprisingly sophisticated for a show like this, which would seem much more successfully scaled to the level of audience-pleasing community theater. Finding Neverland is an unremarkable piece of musical theater flying on the coattails of a much beloved, much better creation that has been overworked to the point of exhaustion.