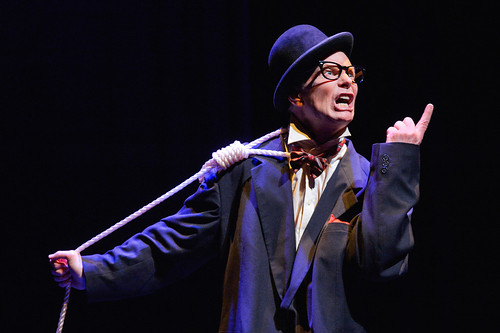 
Bill Irwin wants to address everything you’ve ever wanted to know about Samuel Beckett but were afraid to ask. His casual one-man show On Beckett, now in a short run at American Conservatory Theater’s Strand Theater, provides an excellent opportunity to explore the enigmatic Beckett from a safe distance and through utterly delightful filter of Irwin, a revered actor and clown with a deep San Francisco history going back to the Pickle Family Circus. Since his Pickle days, Irwin has won himself a Tony Award (Who’s Afraid of Virginia Woolf in 2005) and a reputation as an extraordinary human being in many ways – certainly for his deft clowning but also for his sensitive acting (I saw him on Broadway about 15 years ago in Edward Albee’s The Goat or Who Is Sylvia? opposite Sally Field and he blew me away in a role that I don’t think was meant to blow anybody away) and for his expanding expertise in the perplexing world of Beckett.

If you think about On Beckett as sort of a lecture demonstration, you’d have to rank it among the best imaginable lecture demonstrations. For about 70 minutes, the 66-year-old Irwin talks about Beckett, though not in a scholarly way. He insists from the start he’s not a Beckett scholar, nowhere near. He hasn’t even read the novels, though he has poked his way through them and extracted performable bits.

Rather, Irwin is a super fan of the Irish writer. As a physical comedian, Irwin says he has a special affinity for the way Beckett writes for the body. This is where the demonstration part kicks in. Performing three of Beckett’s 13 Texts for Nothing (imagine if Beckett, who died in 1989 at age 83 was able to write for texts as we know them today, not published works but jagged pieces of dialogue we zing through the air to each other’s phones), bits from the plays Waiting for Godot and Endgame and a passage from the novel Watt, Irwin brings the work to life as only he can. 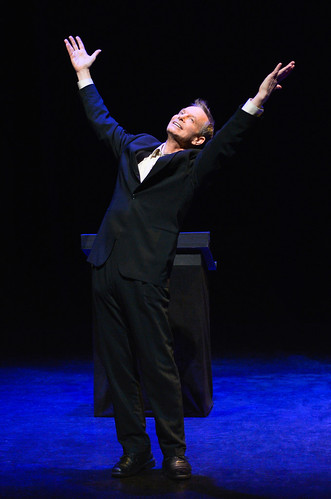 There’s a very fluid feeling to the evening as if Irwin could substitute any one selected piece with another, but the results would be the same: the pleasures of watching him are infinite and Beckett remains captivatingly obtuse. It’s not that Irwin doesn’t illuminate the work. It’s more that with Beckett there’s just no winning. There’s enjoyment, laughs, bafflement and frustration to be sure, but very little clarity. And he’d probably be very happy about that. Well, maybe not happy but content that his work was getting into people’s heads and funny bones even if they have no idea what it all means.

At Wednesday’s opening-night performance, Irwin followed the performance, as he apparently often does, with a Q&A beginning 90 seconds after the final blackout. Other than lighting cues, there wasn’t a significant difference between the show and the talk-back. Indeed, Irwin ended the Q&A with a treat: a reading from the novel The Unnamable. The most affecting part of the show is Irwin’s discussion of Godot, which he now pronounces GOD-oh (after pronouncing it for years, like many Americans, guh-DOH). Irwin is something of an expert here, having been in the 1988 Mike Nichols production with Robin Williams and Steve Martin as well as in the 2009 production with Nathan Lane and John Goodman, and still the actor says he’d like another crack at the play (and at Endgame, which he did with ACT Artistic Director Carey Perloff) because, as with most great writing, you find different levels of meaning at different times of life.

It seems impossible that Irwin, so smart and engaging and genuine in his Beckettian affection, could be pedantic or pretentious, which plenty of people can be when expounding on Beckett. He seems deeply connected to the contradictory worlds Beckett conjures, and his interpretations are beautiful and full of feeling. Toward the end of the show, Irwin pays tribute to Beckett’s affection for vaudeville and offers the audience a bit of a palate cleanser with a soft-shoe tap dance and a song. It’s a sweetly thrilling moment: one master paying homage to another.