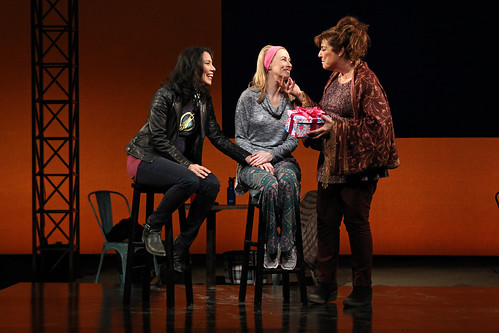 
If the idea of an NPR-ready take on the challenges and complexity of menopause appeals to you, get yourself to Berkeley Repertory Theatre’s Peet’s Theatre to see The Madwoman in the Volvo, Sandra Tsing Loh’s disarmingly humorous exploration of her midlife mania. If the combo of NPR and menopause raises your hackles, stay away.

Loh may be familiar from her radio shows, her books (this particular show is based on her 2014 The Madwoman in the Volvo: My Year of Raging Hormones) or her frequent Bay Area appearances as a monologist in shows like Aliens in America and Sugar Plum Fairy (both at the now-defunct San Jose Repertory Theatre). Reviewing both of those shows, I found Loh’s work ran from mildly funny to the excruciating pain of watching other people’s home movies.

This show, directed by Lisa Peterson, Berkeley Rep’s new associate director, is better: funnier, less self-indulgent and with 200% more people on stage. Happily, Loh co-stars with Shannon Holt and the invaluable Caroline Aaron (a familiar face – and voice! – from Mike Nichols, Woody Allen and Nora Ephron movies). This relieves some pressure from Loh having to tote the whole theatrical barge by herself. This still feels like a solo show with ever so much more telling than showing, but having two delightful actors to play her girl squad and assorted lovers, feminists (hello, Germaine Greer!) and children is highly enjoyable.

Loh and her compatriots are, thanks to set designer Rachel Hauck, literally playing in a giant sandbox. There’s a central platform where much of the action happens, but it’s surrounded by sand, presumably representing the Burning Man play, where Loh begins what she describes as a descent into hell (the first lines of the show are actually Dante’s). At age 46, married and the mother of two daughters, Loh and her gal pals head to the Nevada desert to rage and celebrate a friend’s 50th. The surprise of the trip is that Loh realizes that she is in love with her longtime manager, whom she calls Charlie, and it turns out he’s in love with her. 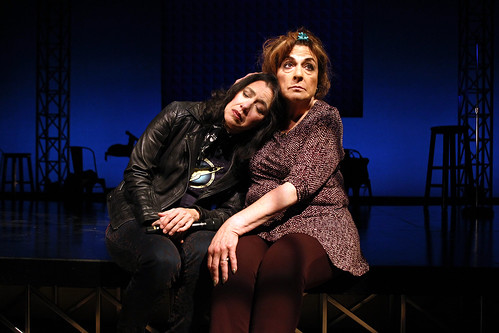 So along with the disruption of her marriage, Loh also heads into menopause and all the physical/chemical adventure that entails. For Loh it involves depression, not unlike her mother. And at one point, she seriously wonders if she even loves her daughters anymore or if she ever even loved them to begin with. Heavy stuff.

But nothing is too heavy here. In fact it’s a pretty glossy and chipper 90 minutes that acknowledges some important things like: there are 131 million women in the U.S. and more than half are 45 or older; menopause sucks, is hard and returns a woman’s body chemistry back to her teenage years (one character says it’s not a change so much as a return, which is pretty interesting); and when you’re an inveterate sharer of your life with the public at large, there’s going to be a certain level of naval-gazing no matter how charming, well directed or well designed your delivery vehicle.

There’s a meta-theatrical aspect to this Madwoman that doesn’t quite work. We’re led to believe that the co-stars are showing up from their commute from…Los Angeles? Or somehow they took BART and the Bay Bridge to get to the theater. And then the show’s ending just sort of happens. Loh quickly winds up and then, using the meta-theater gimmick again, attempts to re-end the show, not as the “actress” but as the “real person,” though it’s hard to tell the difference.

Whether she’s leading the audience in a pre-show Trump frustration scream, tossing Ricoila lozenges to coughing audience members or spilling details of her most intimate personal life, Loh has a monologist’s bravery. She puts a lot out there and attempts to make it smart, engaging and entertaining and largely succeeds. As someone who will be turning 50 soon, I was particularly taken with a line from Loh’s Madwoman book on the subject of commemorating the half-century mark: “The only event like a 50th birthday — the only event that celebrates and commemorates you as a grown-up, with a full, adult life – will be your funeral. So let this celebration of your fully golden self happen when you are alive. And have some cake, for God’s sake.”

You could say that Loh’s Madwoman on stage is a little like having your cake and eating it, too.