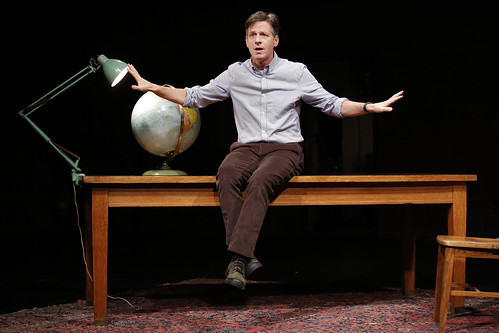 Martin Moran performs his solo show All the Rage in repertory with his other solo show, The Tricky Part as part of American Conservatory Theater’s @TheStrand series through December 11. Photos by Joan Marcus


If Martin Moran wanted to tell me about his trip to the dentist, I would stop whatever I was doing and listen in rapt attention knowing that Moran is a master storyteller and will inevitably find every telling detail, every character nuance, every link to something bigger than just the story he’s relating.

Moran is an extraordinary performer. In 2005 at San Jose Repertory Theatre he performed his solo show The Tricky Part, a captivating, upsetting, utterly engaging piece about the sexual abuse he suffered as a boy with a counselor from his Catholic summer camp, and now he’s back with that show and another, somewhat related show, All the Rage. Both are being performed in repertory as part of American Conservatory Theater’s new series @TheStrand.

Because I had already seen and loved The Tricky Part (and read the equally engrossing memoir of the same name), I was especially interested in All the Rage, which, like its predecessor, is directed by Seth Barrish and has already been loved and admired on stages far and wide.

The show is ostensibly about how Moran, now in his mid-50s, was able to forgive the man who abused him (they actually met years later) and where in the world is all the rage that should be consuming him and driving him toward revenge?

That’s a rather dramatic description of what the play is sort of about because Moran appears to be a fairly gentle, intelligent, compassionate, wonderfully self-deprecating person not prone to fits of grand drama (which is funny considering he’s a successful actor with an impressive resume of Broadway shows and more). Rather, Moran, instead of acting on rage, is more prone to turning inward and examining himself and how he’s operating in the world around him. “Where is your rage?” people ask Moran. He pauses. “It pisses me off.” 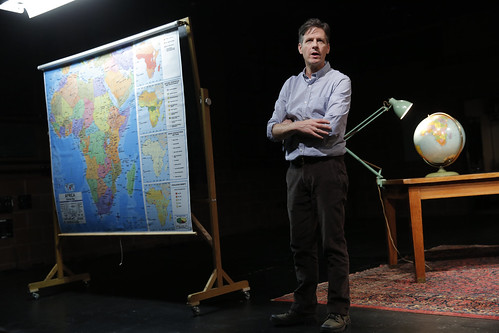 Sure he’s as quick to anger as any of us when it comes to almost being hit by a cab while using the crosswalk, and even his most calming Sanskrit mantra can’t always provide the calm, centering place when it is desperately needed. But in several key scenes that Moran shares with us – an enraging encounter with his father’s second wife on the day of said father’s funeral, the aforementioned encounter with the pathetic abuser – rage becomes something quite different.

Before heading into the theater, knowing a little about the show, I was kind of hoping to glean some useful information about dealing with rage. Let me just say that in our post-election world, with one swampy day after another, I have found that a channel for rage might be useful. And while Moran’s 80-minute show is hardly a self-help experience full of new-age platitudes, it is extremely helpful to experience a slice of the wider world through Moran’s sensitive, well-observed vantage point. This is a writer of great skill whose verbal flourishes are always incisive, never superfluous. He’s just as good as a performer, relaxed and funny, warm and energetic. This is a man who sees the world in an interesting way and with attention to detail. More than a few times in the show, we see what he’s seeing, feeling what he’s feeling, right down to the light on someone’s body or the nature of his breath or his heartbeat.

In some ways, Rage is a hodgepodge of references, skittering about from Denver to South Africa to Las Vegas to the Statue of Liberty. We see Moran on stage in the musical Spamalot and we see him visiting the cradle of civilization outside of Johannesberg. We watch him serving as a French translator for a refugee from Chad seeking asylum in the U.S. and we see him dealing with a profound family tragedy. All the while, he’s skittering about the stage from magnetic bulletin board to laptop computer to overhead project to wall map, conversing with us like he were an actual person (as opposed to a writer/actor) and we were one person (as opposed to many in the dark).

That’s the thing about Moran: he draws you in, and even when it seems like he can’t possibly pull all of this together, he does, and in such a moving way that you’ll be thinking about him and feeling his show long after you leave theater. I still feel rage, but I’m also consumed with gratitude that there are people like Martin Moran in the world to help us make more sense of our complex human messiness. (And you can bet I’ll be reading his latest book, All the Rage, a Quest, which is available here.)