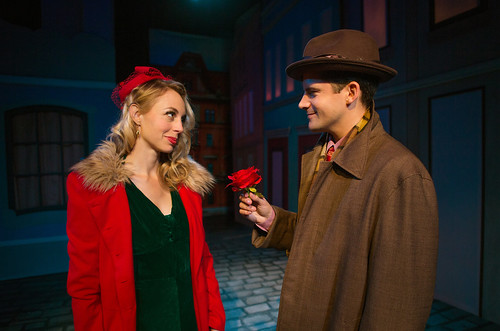 
The 1963 musical She Loves Me is just a little gem of a musical – full of melody and charm and camaraderie and romance. The recent Broadway revival made a case for the show as sturdy, funny showcase for actors who can perfectly balance realism and musical comedy in a way that makes the show feel intimate and lived in even while it traffics in song and dance.

Just in time for the holidays, San Francisco Playhouse polishes this gem to a sparkling shine. Director Susi Damilano and a fine ensemble of actors and musicians deliver the Playhouse’s most consistently rewarding musical yet.

Apparently Hungarian-born playwright Miklós László stumbled onto an irresistible storyline when he penned the play Parfumerie in 1937 about store clerks who loathe each other on sight without realizing they’ve already fallen in love through letters they’ve shared in a lonely hearts club. The play became the gold-standard 1940 Ernst Lubitsch movie The Shop Around the Corner starring James Stewart and Margaret Sullivan, and just a few years later in 1949 it became the Judy Garland musical In the Good Old Summertime. Audiences apparently love being in the know about the protagonists long before they have any clue that fate and coincidence has mashed up their love lives and their work lives. (The 1998 Tom Hanks–Meg Ryan rom-com You’ve Got Mail is also a riff on the story, but…blech.)

Writer Joe Masteroff expertly adapted the original play for the Broadway stage with a perfectly calibrated score by Jerry Bock and Sheldon Harnick (the duo that would have its biggest hit in Fiddler on the Roof) that features irresistible tunes. Just try to get the title song out of your head and “Will He Like Me?” is as emotionally honest a ballad as Broadway ever produced. The musical is so masterful (disarmingly so) it can make a sexual awakening at a library or the heart-expanding joy of vanilla ice cream into pure melodic joy. 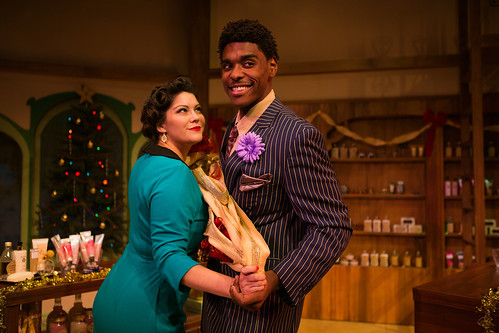 Damilano’s ebullient production features a wonderful five-piece band headed by music director David Aaron Brown that sounds much larger and fuller than it is, with rich violin, woodwinds, brass and accordion giving real warmth and vitality to the score. So from the moment the overture begins, the spell is cast, and Damilano and her actors never break it.

As the central lovers/fighters, Monique Hafen as Amalia and Jeffrey Brian Adams as Georg, have a nice chemistry that anchors the production and makes you care whether or not they end up together. They are both vocally assured, and the one-two punch of her “Vanilla Ice Cream” followed by his “She Loves Me” is sheer musical theater bliss.

For a small Budapest perfume shop, Maraczek’s employs a large number of clerks, but that’s good for the musical. MVP award goes to Joe Estlack as journeyman Ladislav Sipos, and also doubles as a wonderfully noodle-legged dancing waiter at the Café Imperial. And then there’s scene stealer Nanci Zoppi as Ilona Ritter, whose supposedly secret relationship with co-worker Steven Kodaly (Rodney Earl Jackson Jr.) leads her to heartbreak and then to glorious self-realization. Zoppi’s “I Resolve” and “A Trip to the Library” are stellar, and her duet with Hafen on “I Don’t Know His Name” is a beautiful moment of backroom bonding. Jackson is marvelously slinky on his two big numbers, the seductive “Ilona” and the FU to his coworkers, “Grand Knowing You.”

As the gruff but lovable Mr. Maraczek, Michael Gene Sullivan has a sweetly melancholic song (“Days Gone By”) and Nicholas J. Garland as young delivery boy Arpad is a constant bright spot, especially when he comes into his own on “Try Me.”

A jewel needs a showcase to really sparkle, and set designers Bill English and Jacquelyn Scott provide a marvelous world for these characters to inhabit. A Budapest street becomes the cosmetics-filled shop thanks to an efficient turntable, but further spins reveal a swanky nightclub (featuring a droll headwaiter played by Brian Herndon), and another portion of the set unfolds to reveal Amalia’s messy bedroom. It all looks great, assisted greatly by the lighting design of Thomas J. Munn.

Though it’s not a holiday show per se (it begins in the fall and ends on Christmas Eve), She Loves Me makes for ideal December/January entertainment. People squabble and suffer and ultimately come together in warmhearted ways, all the while singing charming songs. Sounds like a pretty ideal holiday to me.