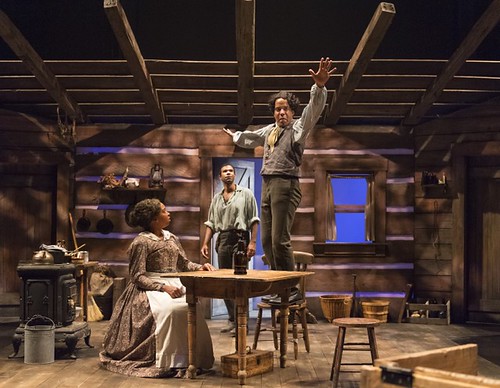 Cobbler Addison Pedigrew (David Everett Moore, standing on chair) tells his brother, Frank (Lance Gardner), and his Aunt Dorcas (Dawn L. Troupe) about his encounter with the local sheriff in Keith Josef Adkins’ Safe House at Aurora Theatre Company. Below: The Pedigrews argue about what to do with fugitive slave Roxie (Jamella Cross, rear). Photos by David Allen


There are several ways to interpret the title of Keith Josef Adkins’ Safe House now at Berkeley’s Aurora Theatre Company. One way sees cobbler Addison Pedigrew, a free man of color in Kentucky, aiming for his version of the American dream: a thriving shoe making/repairing business run out of his home to support his Aunt Dorcas and his brother, Frank, so that they can be truly free to thrive and expand their families. The other way, according to Frank and Dorcas, is to provide shelter and assistance to fugitive slaves on the Underground Railroad. Both co-exist, but not easily in this 2014 drama, which takes much of its first act to really get going.

The first half of the plays two-plus hours is spent establishing the family dynamic in the Pedigrew household and the culture in which they live circa 1843. Having been caught helping a fugitive slave, they have spent the last two years under the thumb of the local sheriff, with their movements severely limited – shopping allowed only every three months, all doors of their home and barn must remain open, no swimming in the local creek even on the hottest day, and Addison’s cobbler business requires him to go door to door rather than working out of his home. The two years of severely curtailed freedom is almost over, and Addison has big plans. 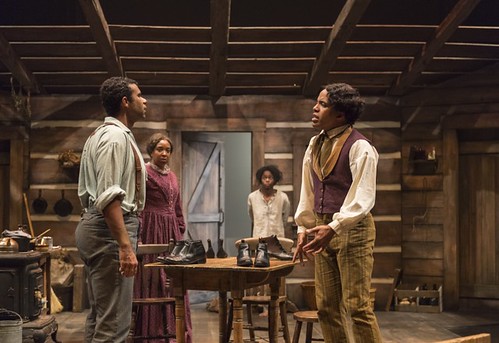 As played by David Everett Moore, Addison is an energetic dreamer, a hard worker and a planner. His vision of the American dream is having a successful business and being respected by his customers, which, if all goes well, will include the sheriff and Kentucky’s big-footed governor. The only thing threatening his plans is his brother Frank (an intense and powerful Lance Gardner), whose idea of freedom involves actual freedom: doing what he wants, helping whom he wants, loving whom he wants and not sucking up to the white man or succeeding on their terms instead of his own. Aunt Dorcas (Dawn L. Troupe) provides some stability to the yin and the yang of Addison and Frank, although her heart seems to reside in a place of service, of providing safe haven to the runaway slaves.

Playwright Adkins throws in an under-baked love triangle with Clarissa (Dezi Solèy), a free woman of color who is supposed to marry Addison but is actually in love with Frank. There’s another sort-of love story between Dorcas and Bracken (Cassidy Brown), one of the sheriff’s henchman, but throwing an interracial attraction at us (born in their shared childhoods) late in the play robs the story and characters of depth. If we had known about their back story earlier, perhaps Bracken wouldn’t come across as simply the representative of authoritarian white power, the henchman of the sheriff, whom we never meet.

There is a huge surprise in Act 2, one that makes the audience gasp, and it’s only then that Safe House really catches dramatic fire. Even the fiery performance of Jamella Cross as runaway slave Roxie can’t quite raise the dramatic level the play seems to be aiming for, but that plot twist really does because it cuts right to the heart of the conflict in how brothers Addison and Frank view what it means to be free.

Having appeared frequently on the Aurora stage (among many other local stages) as an actor, L. Peter Callender sits in the director’s chair for Safe House, and perhaps the most surprising thing about his direction is that he has failed to create a show that benefits from the Aurora’s incredible intimacy. The performances, while strong, are not as finely tuned or detailed as they might be, and certain moments – as when one character spits in another’s face – feel major but barely register.

Safe House ends up feeling like a powerful play that hasn’t found its power.