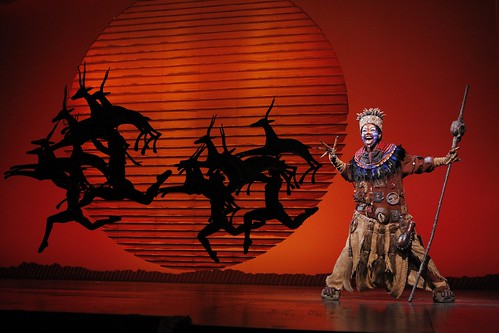 Buyi Zama is Rafiki in the North American tour of Disney’s The Lion King, at SHN’s Orpheum Theatre. Below: Nia Holloway is Nala” with the Lionesses. Photos by Joan Marcus. ©Disney


The “mane” question is this: after nearly 20 years, does Disney’s The Lion King, now the highest grossing Broadway show of all time, still have any roar left? Based on the touring production that has settled into SHN’s Orpheum Theatre for a two-month run through the holidays, the answer is a qualified yes.

From the outset, when the 1994 animated hit leaped to the stage in 1997, the strength of the production has rested solely on director Julie Taymor’s vision for adapting cartoon to live theater. Rather than rely solely on blockbuster special effects, Taymor and her creative team leaned in the direction of traditional and inventive puppetry, gorgeous (sometimes surprising) costumes and masks that rarely cover a performer’s face. The result is something that feels highly theatrical and imaginative but also remains true to the movie, which is a simplified spin on Hamlet set in the African savannah. The score, primarily by Elton John (music) and Tim Rice (lyrics), has a sweet poppy appeal (“Hakuna Matata”, “Can You Feel the Love Tonight,” “I Just Can’t Wait to Be King,” the majestic “The Circle of Life”). But the real heft of the show’s music comes from Lebo M, a South African composer whose contributions, including the rousing Act 2 opener “One by One” and the show’s best number, “He Lives in You (Reprise),” lend an authenticity and uncommon beauty to the Broadway trimmings. 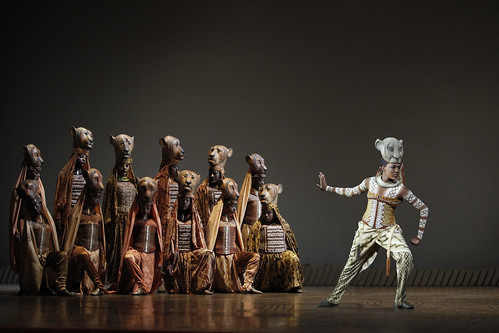 Having made over a billion dollars worldwide, The Lion King is a massive industry built on solid, crowd-pleasing craftsmanship. The show, at 2 1/2 hours, is a little slow, and pacing in this tour can be patchy. At Wednesday’s opening-night performance, there was some unfortunately persistent audio feedback in Act 1 that was followed, about 30 minutes in, by a five-minute break while technical issues were addressed. Not what you expect from a show where top ticket price is over $200, but hey, live theater is truly live.

The spectacle of The Lion King remains mostly undimmed. The opening procession of The Circle of Life still packs a punch, even if the animal parade seems less full than it once was, and the quieter moments in the show – the lionesses in mourning, the grasslands (in the form of enormous hats) swaying in the wind, Simba’s cris de coeur “Endless Night” under the stars – tend to be more powerful than the noisier numbers. The hyenas’ song “Chow Down” has always been a lowlight of the show and is especially so here.

It’s interesting to see The Lion King in the midst of this nightmare election season. Scar, the egotistical, power-hungry villain, seems awfully familiar, and his grab at power just for the sake of power and his wanton destruction of the pride lands to fuel his own needs, seems a stern warning. The kids who grew up with The Lion King both on film and on stage are of voting age now. Let’s hope its lesson to keep the circle of life healthy and free of narcissistic villains intent on destruction.