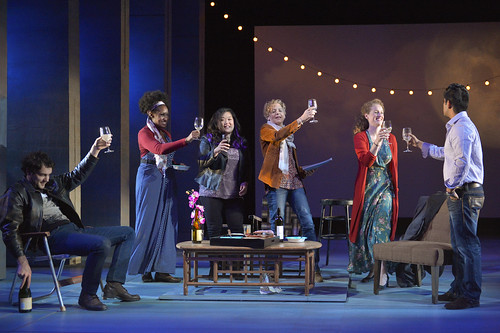 Psychology student Hilary (Brenda Meaney, second from right) celebrates being published with colleagues from the prestigious Krohl Institute for Brain Science in the West Coast premiere of Tom Stoppard’s The Hard Problem. Below: Spike (Dan Clegg) and Hilary (Meaney) meet up at a conference in Venice, Italy. Photos by Kevin Berne


All through American Conservatory Theater’s production of The Hard Problem you can feel playwright Tom Stoppard making an effort to be accessible. With a play about the very nature of consciousness – the “hard problem” about not just the knowing about what’s at our human core but the knowing about the knowing – there’s a danger of a) boring a lay audience with intricate lectures on neuroscience or b) becoming so involved in the intellectual pursuits of the play that actual drama. Stoppard slips a little into both camps during his play’s one hour and 40 minutes, but it’s hard to fault a playwright for being too smart or too passionate about the subject he’s exploring.

This production marks the 17th Stoppard play produced at ACT in the last 50 years and the 10th directed by Artistic Director Carey Perloff. It’s Stoppard’s first new play in a decade, and as mildly entertaining as the play is, it feels like minor Stoppard – a lot of interesting ideas presented in an attractive package without a terribly compelling story or characters. This theatrical exploration of the nature of consciousness (and its relationship to altruism and the world’s financial markets) comes at a pop-culture moment when a television show, HBO’s “Westworld,” is exploring similar territory in a completely different (and more satisfyingly dramatic) way. Stoppard gives us neuroscientists, psychologists and hedge fund brokers debating about the nature of the mind and what guides us as human beings, while HBO gives us a theme park inhabited by lifelike robots on the verge of sentience. These robots are programmed to deliver humanlike responses, complete with a certain amount of randomness thrown in to make it highly realistic, but they’re machines incapable of actual original thought and feeling (or are they?).

Stoppard’s appealing main character is Hilary (Brenda Meaney), a psychologist whose mind is capable of considering elements beyond the scientific in her quest to understand the difference between the brain the mind, between evolutionary purpose and spiritual revelation. She dares to bring the concept of God into scientific discourse, and the scientists around her balk as if she had proposed chakra alignment as a cure for cancer. 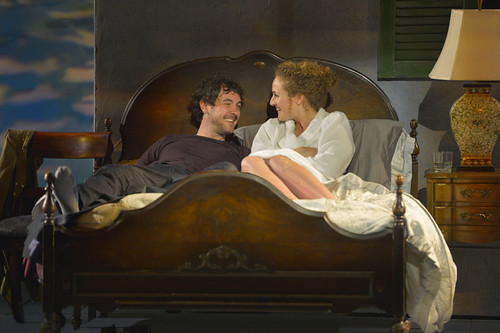 It seems the people around Hilary exist to provide breadcrumbs on her trail toward enlightenment of some kind. The spiky boyfriend Spike (the ever-amiable Dan Clegg, who is supposed to read a decade older than Hilary but doesn’t) and the brash brain scientist Amal (Vandit Bhatt) challenge and provoke (and occasionally demean) her, the colleagues (Narea Kang as Bo and Anthony Fusco as Leo) who fall in love with her and the big money bags who funds the brain institute where she works (the pitch-perfect Mike Ryan as Jerry, who seems to be in a different, more engaging play) leads her to the rather corny heart of the play where we consider the notion of coincidence vs. miracle. There’s also a lovely couple – scientist Ursula (Stacy Ross) and Pilates instructor Julia (Safiya Fredericks) – who seem to be hanging around for no apparent reason other than to employ two wonderful actors who don’t get nearly enough to do.

Stoppard has a lot of thoughts to share about the mysterious center of our humanity, but he does so in scenes that are ostensibly about something else – competing for a slot at the Krohl Institute, trying to get laid, having a disastrous dinner party (why must brainiacs fail so miserably at the domestic arts?), trysting in Venice – and that keeps the play on a relatable, human scale. Perloff’s production keeps to a brisk pace (too brisk in some scenes where it’s hard to pick up on everything being said), with the coolly efficient sliding panels of Andrew Boyce’s set shifting the action from laboratories to apartments to backyards to pilates classes, all with the aid of a rear projection screen that is mostly filled with clouds (as in “head in the…”).

There’s not a whole lot of drama here other than the publication of an article with dubious scientific merits and a deep dark secret that isn’t much of either. There’s a strange alpha-male confrontation between hedge fund gazillionaire Jerry and Amal that feels like it’s a different, more vital play suddenly encroaching on this rather stately one, and the sexual chemistry between Spike and Hilary never really registers, even when Spike cavorts around in Hilary’s micro-mini negligee.

There are bursts of humor (this is Stoppard after all), and some of the brainy brain stuff is thought provoking, but The Hard Problem ends up being more problematic than engaging.