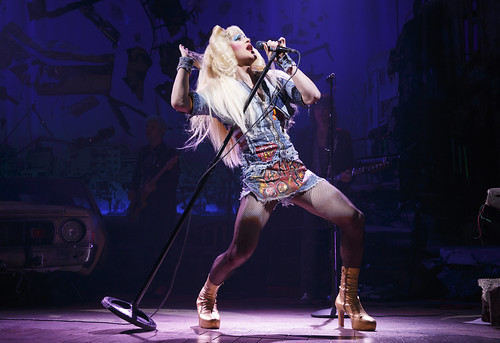 Darren Criss is Hedwig, a rock star with issues, in the Broadway touring production of Hedwig and the Angry Inch. Below: Lena Hall reprises her Tony Award-winning role as Yitzhak in Hedwig. Both Criss and Hall are San Francisco natives, and they kicked off the Broadway tour at SHN’s Golden Gate Theatre in their hometown. Photos by Joan Marcus.


Hedwig and the Angry Inch launches its first Broadway national tour with the power of a barbecue fired with jet fuel. An explosion of rock, lights, humor and heart, this show is a rarity among rarities: a quirky late ’90s off-Broadway hit that inspired a devoted cult following that seemingly peaked with its big-screen adaptation in 2001. Over the years, however, Hedwig’s tragic tale of rejection and glam-rock transformation has traveled around the world and created an international league of Heheads.

By 2014, the next logical step for a misfit rock musical with a built-in and avid fan base was Broadway. Armed with director Michael Mayer and star Neil Patrick Harris, Hedwig opened on Broadway to rapturous response and ran for a year and a half with five Hedwigs after the Tony-winning Harris departed the production. One of those Hedwigs, “Glee” heartthrob Darren Criss now headlines the national tour, which kicked off in fine form Wednesday night at the Golden Gate Theatre as part of the SHN season.

The show is essentially rock concert and monologue, making it an extraordinary showcase for its star, but creators John Cameron Mitchell (book and the original and still greatest Hedwig) and Stephen Trask (music and lyrics) add other levels to this show, including a secondary lead, Yitzhak, Hedwig’s Croatian husband, a former drag queen whose presence adds even more depth to the show’s gender fluidity and sexual vibrancy. For the tour, Yitzhak is played by the fierce Lena Hall, who won a Tony for the role on Broadway. In a delightful twist, Hall will take over as Hedwig for one performance a week (schedule below).

This tour recreates the Broadway production faithfully, right down to the concept that for one night only, Hedwig and her band, the Angry Inch (named after the result of her botched sex-change operation), are taking to the stage in a legit theater after the failure of Hurt Locker: The Musical (as on Broadway, the theater floor is littered with playbills for that bomb of a show, which opened the previous night and closed at intermission – do yourself a favor and spend time with that playbill because it is hilarious). The set for Hurt Locker remains, and Yitzhak performs a snippet of the show’s love theme. Otherwise, aside from some script tinkering to make it San Francisco-centric (references to the “newly annoying Mission,” Uber X, a gender-neutral bathroom on a idling Google bus, doing drugs in the Tenderloin as one does), this is Hedwig as she is meant to be seen: damaged, fabulous, ferocious, heartbroken, funny, loud and aggressively awesome. 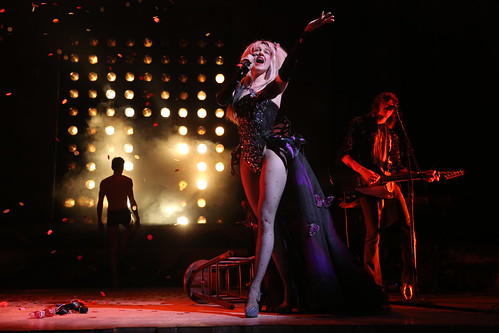 I saw Harris do the show on Broadway, and he was phenomenal, although he didn’t inhabit the character as fully or as emotionally as the remarkable Kevin Cahoon in the much scrappier San Francisco debut of the show at the Victoria Theatre in 2001. Every actor who dons Hedwig’s many (and marvelous) wigs will bring something unique to the party, and Criss brings extraordinary energy and a genuine rock vibe to the scorching score. He shows off some sharp comic timing, although his Hedwig voice seems less East Berlin than it does a governess raised in London by German parents. Aside from the songs, which he imbues with passion and grit, Criss’ best moments are those in which he’s playing the American characters: Luther, the GI who marries young Hansel, turns him into Hedwig and lands her in a Kansas mobile home; and Tommy Speck, an Army brat whom Hedwig takes under her wing (and then some) and turns into the rock star Tommy Gnosis. At 29, Criss is the youngest of the Broadway Hedwigs, and that’s a little problematic for a world weary and wise character who tosses off lines like, “One day in the late mid-’80s I was in my early late 20s.” Criss was born in the late ’80s, so when Hedwig is referencing Google buses and placing the action of the show in the here and now, it doesn’t fully make sense.

But Hedwig doesn’t have to fully make sense to be an extraordinary experience, and that’s what this is. Just hearing those songs played full throttle (the fiery four-piece band, under the music direction of Justin Craig are all from the Broadway company) is a transporting experience. Add in the fantastic costumes by Arianne Phillips (that hair dress!) and towering wigs by Mike Potter and you have a rock musical dream in the flesh. The nuclear explosion lighting design (by Kevin Adams) can be a bit much, but if elements of Hedwig aren’t a bit much, it’s not really Hedwig.

The nuance, tenderness and, ultimately power of Hall as Yitzhak provides ample evidence of why a seemingly secondary presence in the show would not only garner awards but make Hall a star. Hers is a voice that can be delicate and searing, and her physical transformation in the show is part of what makes the quasi-religious conclusion so mind-bogglingly glorious. Lift up your hands indeed.

From the department of YOU’RE NOT GOING TO WANT TO MISS THIS:

1 thought on “Hello, love: Hedwig slams her Angry Inch in our faces”