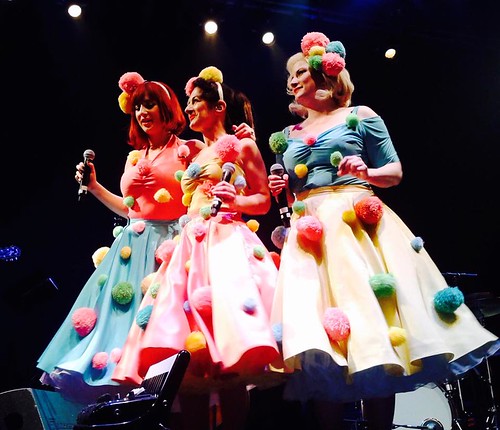 The Puppini Sisters (from left), Emma Smith, Marcella Puppini and Kate Mullins, performed two shows at the Venetian Room at the Fairmont Hotel on Sunday, April 17, as part of the Bay Area Cabaret season. Photos courtesy of the Puppini Sisters

The afternoon performance, like the sold-out evening performance, was part of the Bay Area Cabaret season, a season that spans Broadway, pop, jazz and, in a grand Puppini embrace, high camp and sterling musicianship.

If you don’t know the Puppinis, click here and spend some quality time reveling in their close harmonies, their abundant humor and their impeccable musicianship. The trio, which knows its way around a sisters Andrews, Boswell, McGuire, Dinning, Lennon arrangement, was formed in 2004 by Marcella Puppini with Kate Mullins and Stephanie O’Brien. In 2012, O’Brien left the group, replaced by Emma Smith, but the course of the Puppinis ever did run through traditional numbers (“Jeepers Creepers,” “Diamond Are a Girl’s Best Friend”) and not-so-traditional numbers (Gloria Gaynor’s “I Will Survive,” Kate Bush’s “Wuthering Heights”).

In concert at the Fairmont, the Puppinis were in fine fettle, looking good (they were decked out in Easter basket-colored tops and skirts adorned with pom-poms) and sounding marvelous. Backed by a swinging three-piece band – Henrik Jensen on bass, Blake Wilner on guitar and Peter Ibbetson on drums – the ladies dazzled with a set list that provided 75 minutes of serious fun.

They opened with the original title song of the new album, “Is This the High Life?,” and veered directly into classic three-part harmony territory with “Mr. Sandman.” From the traditional to the decidedly nontraditional: a thrilling mash-up of “Rapper’s Delight,” which swings more easily than you might imagine, and Sia’s “Chandelier” (ditto). 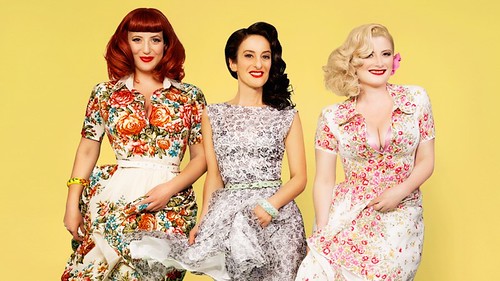 Throughout the show, the Puppinis (none of whom are actually sisters) opted to break down the harmonies and let the individual voices shine with solo spots. First up was the beguiling Mullins with a full-throttle version of “Love Me Tender” accentuated by Wilner’s electric guitar. Puppini was the next solo with the self-penned title track to her new solo album, “Everything Is Beautiful,” in which she promises the meaning of life in three minutes (and she delivers). And then Smith pretty much brought down the house with her dedication to Tony Bennett: “Cheek to Cheek,” playfully performed with Jensen on bass and the audience snapping along.

As good as they are on their own, the Puppinis are nothing short of dazzling when they’re together. There were no low points in this show, but among the highlights was a mashup (in the truest sense) of Destiny’s Child’s “Bills Bills Bills,” Meghan Trainor’s “Dear Future Husband, Kander and Ebb’s “Money Makes the World Go ‘Round” from Cabaret, Rihanna’s “Bitch Better Have My Money,” The Adventure of Stevie V’s “Dirty Cash (Money Talks),” Madonna’s “Material Girl” and “Diamonds Are a Girl’s Best Friend from Gentlemen Prefer Blondes. How do you follow such a thing? With a dreamy version of “The Tennessee Waltz,” that’s how.

Between the be-bop vocalese salute (“We Love to Bebop”) and the reinvention of “Girls Just Want to Have Fun,” they managed a jaw-dropping tribute to David Bowie (“Changes,” with a final few mind-blowing notes) and a nod to the women who provided their foundation, the Andrews Sisters’ “Boogie Woogie Bugle Boy.”

When you’re having this much fun showing off your extraordinary jazz/pop/harmonic chops, and the audience is going wild with delight, what can you possible do for an encore? If you’re the Puppinis, you promise to turn the camp dial up to 11 and haul out the swingingest, funniest version of “Supercalifragilisticexpialidocious” this side of an animated chalk drawing.

The Puppini Sisters are among the most exciting, innovative and entertaining acts out there right now. They are majorly talented musicians whose specialty, lucky for us audiences, is happy-making music of the highest order.

The Puppini Sisters’ live mashup of “Rapper’s Delight” and “Chandelier”

FOR MORE INFORMATION
Net up in the Bay Area Cabaret season is Bay Area Teen Idol 2016 on May 15 and Liz Callaway and Ann Hampton Callaway’s From West Side Story to Wicked: Broadway by the Callaways on May 22. Call 415-927-4636 or visit www.bayareacabaret.org.

2 thoughts on “Pure pop pleasure with the Puppini Sisters”