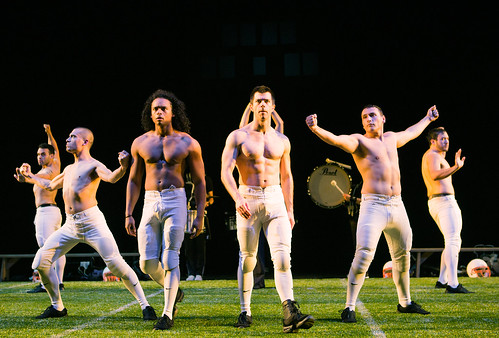 The team prepares for a workout in Andrew Hinderaker’s Colossal at San Francisco Playhouse: (actors, from left) Ed Berkeley, Brian Conway, Cameron Matthews, Thomas Gorrebeeck, Xander Ritchey and Brandon Hsieh. Below: Mike (Jason Stojanovski), in a wheelchair, and his younger self (Thomas Gorrebeeck) view playbacks of the play that changed his life. Photos by Jessica Palopoli


Colossal at San Francisco Playhouse is a (foot)balls-out theatrical experience that manages to provoke thought and elicit feeling all the while it dazzles with its aggressive stagecraft.

Andrew Hinderaker’s play sets up theater as a competitive sport, that is, this play is competing with itself by placing a large scoreboard-type timer above the stage and letting four quarters unfold in real time over an hour. Then there’s also the turf-covered playing field (set by Bill English), the bright Friday night-style lights (design by Kurt Landisman) and the ear-piercing whistles (sound design by Theodore J. H. Hulsker). This is more than a stage for a play: it’s a playing field ready for intense action.

And that’s what it gets for about an hour – there is football tossing and tackling like you’d see on any field. But then there’s a dance/choreography element as well as a fantastic marching drumline (Alex Hersler, Zach Smith and Andrew Humann) to punctuate nearly every beat of the drama. There are seven football players on stage, sometimes in full gear, sometimes not (and more times than you might imagine shirtless), and they begin their workout before the show begins to get the blood pumping. You can’t even address the topic of football unless you’re pumped up, and that’s part of the point.

Hinderaker’s play wants to match the energy and testosterone level of an actual football game, and he does that by combining character-driven drama with all the (literal) bells and whistles of a football game combined with the he-man-godlike players attempting to be the superheroes their coach (and the gridiron-crazed fans) expect them to be. In director Jon Tracy’s muscular production, the play is successful on all counts – manic energy matched with outsize performances and a whole lot of theatrical dazzle that turns America’s most brutal pastime into a disarming evening of theater. 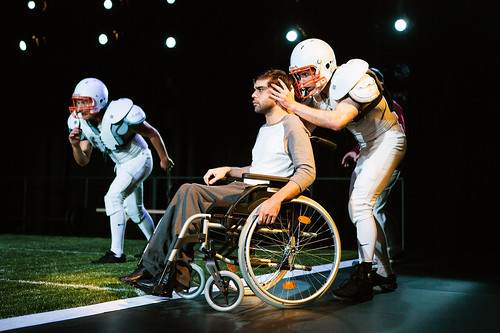 This is a taboo-busting play that wants nothing less than to look into the very nature of masculinity and why its exaggerated displays of force on the football field are so alluring both to players and to fans in spite of the toll this display takes on physical health and long-term well-being. Within the world of these players (and their coach, played by Dave Maier who is so realistic you’d do laps if he told you to), you see men reveling in the homoerotic (the butt slaps, the close physical contact, the stripped-down workouts) while decrying it at the same time. Any show of anything other than ultra-masculinity is cause for name-calling or physical violence.

When Mike (Thomas Gorrebeeck) dances onto the field, he literally dances. His form of rebellion is to play football in direct opposition to his father (Robert Parsons), an esteemed dancer and head of a famous company. Mike grew up as a dancer, which automatically makes him less than manly in the eyes of the other players. But he proves himself on the field (a well-executed pirouette can evade the most brutal of tackles) and ends up as team captain (I was never quite certain, but I feel like this team is a university team).

We see Mike’s story unfold from the point of view of Mike 10 months in the future, in a wheelchair after a devastating spinal injury on the field (“I was reckless instead of fearless,” he says). Older Mike (Jason Stojanovski) is going through rehab, and in what is perhaps the play’s weakest gimmick, his physical therapist (a game Wiley Naman Strasser) is putting a lot of emphasis on the “therapist” part of his job, coaxing from Mike all of his secrets.

The biggest secret has to do with Mike’s co-captain, Marcus (Cameron Matthews), who has disappeared from Mike’s life following his injury. Issues of sexuality do battle with notions of what makes a good football player (or a man, really), and Mike seems much more comfortable with who he is than Marcus does, at least before the accident. The theater as a sport element, with that clock ticking through each quarter, really comes into play in the fourth quarter – will the emotional denouement occur before the clock runs out? It’s a strange thing to watch theater on the clock, but it’s also strangely effective here.

The collision of football and dance, both in the story and the physical production, is fascinating. The players (Xander Ritchey, Brandon Leland, Ed Berkeley, Jacob Hsieh, Brian Conway and Travis Santell Rowland) do an admirable job blending the dance choreography by Keith Pinto and the football choreography (by coach Maier himself), and Gorrebeeck as Mike manages to be tough, vulnerable, graceful and charismatic through it all, while Stojanovski’s post-accident Mike is a mass of tension, regret, grief and, ultimately, strength.

There’s a lot going on in Colossal, a play unlike any I’ve ever seen, where form is content and the more traditional parts (like where old Mke and young Mike converse and work through their issues) are less persuasive than the more daring and physical elements. The physicality is so powerful that it’s likely the story could be told – by this cast anyway – simply through percussion, movement and the passion men have for football…and each other.