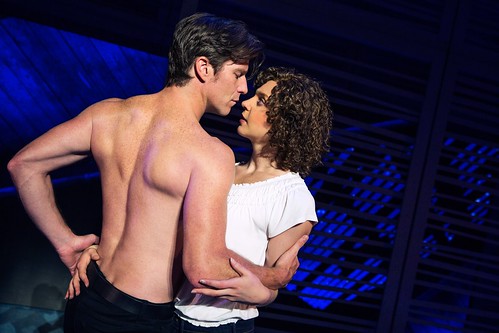 Christopher Tierney is Johnny and Gillian Abbott is Baby in the North American tour of Dirty Dancing – The Classic Story on Stage, running through March 20 at the Golden Gate Theatre as part of the SHN season. Below: Tierney’s Johnny dances with Jenny Winton as Penny. Photos by Matthew Murphy


Oh, help. Someone put Baby in a corner and she can’t get out! The corner is actually the stage of the Golden Gate Theatre, where, as part of the SHN season, she is appearing in Dirty Dancing – The Classic Story on Stage, a reasonably entertaining show that feels less like a national touring production and more like a slick, overly faithful film re-creation you might find in a theme park where the loyal fans come to pay homage and wallow in nostalgia.

The 1987 movie was a surprise hit, spawning a mega-hit soundtrack, award-winning songs and a rabid following on the then-booming business of home video. Stars Patrick Swayze and Jennifer Grey found their biggest, most enduring hit in the period romance (an argument could be made for Swayze in Ghost or Roadhouse) set in a Catskills resort in the summer of 1963. When a movie hits it that big and music is such a key factor in its success, the transition from screen to stage seems inevitable.

But Dirty Dancing screenwriter Eleanor Bergstein took her time adapting the property. When a stage version finally opened in Australia in 2004, it wasn’t a traditional adaptation. Rather than having main characters Baby and Johnny sing songs to each other, they dance to recordings on the radio or on the record player or to the live band playing on the bandstand. Several cast members sing, but not so much in character – more like guest vocalists. That’s a smart way to do it, keeping the focus on the dancing, which is by far the highlight of the live experience.

A touring production of Dirty Dancing has pulled into the Golden Gate, and the bumping and grinding and leaping and twirling of the dancing ensemble is lovely. Michele Lynch is the choreographer (with original choreography by Kate Champion, and it’s always exciting to see the dancers doing their thing, especially the lithe, long-legged ladies, who really put on a show. 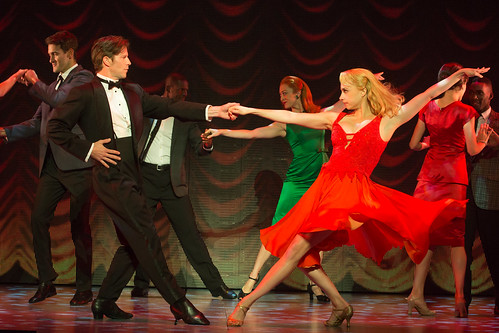 Adapted by Bergstein and directed by James Powell, this Dirty Dancing is pretty much the version you’ve seen on TV for the last 29 years. Relying much too heavily on video screens and projections – they must figure we’re so used to seeing this on a screen we might revolt if too much of the stage version is actually three-dimensional – the world of Kellerman’s Mountain House resort is conjured as a hotbed of guest-employee lust, with much of the heat generated by dance instructor Johnny Castle (a charismatic, Swayze-channeling Christopher Tierney).

Baby and her family – doctor dad, housewife mom, little sis – arrive for three weeks toward the end of summer, and wouldn’t you know, Baby and Johnny are thrust together when the young renegade who plans on changing the world gets involved in an employee drama involving a jerky guy, a jilted girl and a back-alley abortion. For reasons too pulpy to go into, Baby and Johnny must rehearse for a dance performance at neighboring resort The Sheldrake. This entails a long montage of dance training, and to be faithful to the movie, this requires balancing on a log in the forest and practicing lifts in a lake. This is accomplished through projections on a scrim, and it’s wonderfully ridiculous.

As Baby, Rachel Boone, in her J. Grey wig, has some fire, and she dances nicely. But she, like all the actors, are hobbled by a dopey script – at least I’m going to assume that’s why the schmaltzy acting – SCHMACTING! – is so egregious. The 2 1/2-hour show feels like something akin to a 1950s soap opera mashed up with a telenovela. That’s fun in a cheesy sort of way, but not for an entire evening.

Musically, the evening is loud, but the vocals are strong, especially those from Adrienne Walker. Her duet with Doug Carpenter on the show’s finale, “(I’ve Had) The Time of My Life,” is what the audience has been waiting for all night. It’s the most famous song (an Oscar, Grammy and Golden Globe winner) underscoring the most famous moment: Johnny lifting Baby over his head in a perfect lift symbolizing their true love and her ascent into empowered womanhood.

The eight-piece band is a lot of fun as it shifts from mambos to cha-chas to waltzes and then effortlessly works in the hit songs (“Hungry Eyes,” “She’s Like the Wind”) without calling too much attention to the fact that they have never sounded like pop songs from the early ’60s.

This show really is for the fans, who are, apparently, multitudinous. Everything they love is there, from the terrible talent show to Baby and Johnny crawling around like cats in heat to Mickey and Sylvia’s recording of “Love Is Strange.” What isn’t there is a fully realized stage adaptation that feels truly alive rather than dutifully performed by rote.