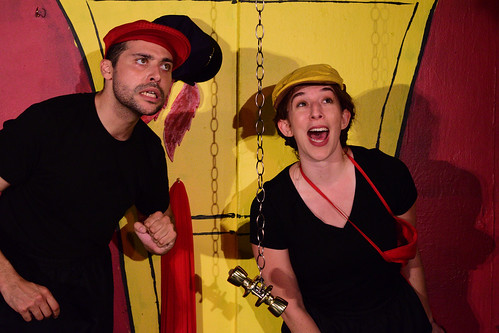 Miyaka Cochrane and Maria Giere Marquis amp up the comic errors in Shakespeare’s The Comedy of Errors at Impact Theatre. Below: Cochrane (left), Jon Nagel (center) and Julie Douglas bring the looney to the tunes. Photos by Claire Ann Rice


Impact Theatre has been known for its Shakespeare reboots, sometimes fierce, sometimes wholly inspired, always intelligent and interesting. Now in its valedictory lap before going on hiatus, Impact has two shows left, including the just-opened Comedy of Errors at LaVal’s Subterranean.

It’s another Shakespearean reinvention by Impact Artistic Director Melissa Hillman, and it is sublime – the perfect concept applied to the perfect play to make something funnier, fresher and more inventive than even Shakespeare could have imagined.

Certainly the Bard of Avon experienced his share of inspired silliness, but he predated Warner Brothers’ “Looney Tunes” by several centuries, so he had no way of knowing how perfectly the wild and wacky style of animators Chuck Jones, Tex Avery and the like would suit his goofiest comedy. It’s entirely possible as well that the screwball nature of Comedy of Errors, with its mismatched sets of twins, mistaken identity chaos and broad physical comedy, played a part in shaping the comic palette of American animation.

Whatever, the notion to pair “Looney Tunes” with Comedy of Errors is loon-atic genius. What Hillman has done here goes way beyond a thematic overlay. Her concept cuts right to the heart of the show itself and multiplies the comedy by multiplying the errors. A million goofy things have been done to Comedy (puppets, musicals, actual twins, single actors playing both twins), but Hillman tops it all by having her four astonishingly energetic actors play all the parts. Sure, single actors play both sets of twins – the Antipholi and Dromios of Ephesus and Syracuse – but that concept comes and goes quickly as the actors playing the twins grab wigs off the women’s heads and start playing Luciana and Adriana. And vice-versa as the women grab the color-coded hats denoting the twins and try on those personae. 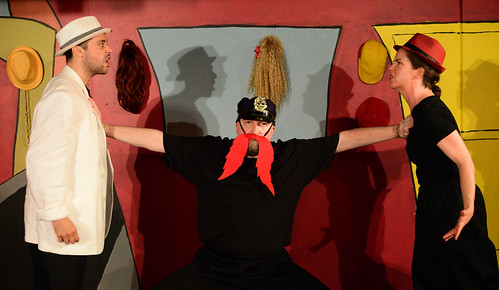 It’s madcap, delirious fun in the truest sense. The play begins at a breakneck speed and never flags through its brisk 100 minutes (including intermission). The actors break a sweat in the name of zaniness, and it really works.

Before the role swapping really gets going, Jon Nagel fills the Antipholus roles with Miyaka Cochrane as the slave Dromios. Maria Giere Marquis starts out as Adriana (fiery wife of Antipholus of Ephesus) and Julie Douglas is her slightly dippy sister Luciana. Adhering to clear roles at the beginning helps set the scene and build a sturdy foundation for the ensuing mayhem once the visiting twins from Syracuse begin causing mix-ups.

If the actors aren’t having a blast, they’re even better actors than they know. They work like a finely calibrated machine, with lots of opportunity to break the fourth wall and comment on the theater-making itself (at one point, an audience member is recruited when there absolutely needs to be another character on stage). Marquis and Douglas pop up as ladies with Minnesota accents and comfy sweaters to serve as hosts for the evening (Cochrane also appears as a sherry-swilling aesthete a la “Masterpiece Theater”), and even though it veers far from Shakespeare, it serves the comedy and helps bring the audience further into the zone.

In true Impact fashion, all of this happens on a single set (painted in bright primary colors by set designer Roger Chapman and simple but effective costuming (by Hillman). There’s an inspired moment toward the end when an abbess needs to appear, and she conveniently drops from the ceiling.

The play has been streamlined with room left for plenty of non-Shakespearean riffs and cartoon-like sound effects. Darth Vader even makes a key (and hilarious) appearance. There aren’t any actual “Looney Tunes” characters, but connoisseurs of Bugs, Daffy, Porky and friends will appreciate re-creations of classic bits and gags. It all fits so well and amps up the comic quotient so effectively that Hillman should patent her invention and send it into the world to make millions for Impact to continue its mission for many years to come.

FOR MORE INFORMATION
Shakespeare’s The Comedy of Errors continues an extended through April 2 in an Impact Theatre production at LaVal’s Subterranean, 1834 Euclid Ave., Berkeley. Tickets are $10-$25. Call 510-224-5744 or visit www.impacttheatre.com.