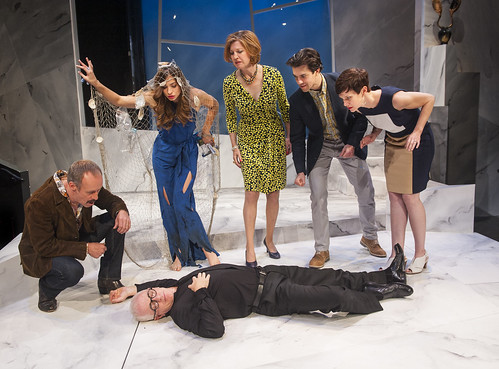 The cast of Amy Freed’s comedy The Monster Builder – (from left) Rod Gnapp as Andy, Sierra Jolene as Tamsin, Nancy Carlin as Pamela, Thomas Gorrebeeck as Dieter and Tracy Hazas as Rita – believe they have avenged the evil of Danny Scheie as “starchitect” Gregor in the Aurora Theatre Company production. Below: Jolene and Scheie work out the intricacies of a design. Photos by David Allen


When salsa splatters across the unsealed Carrara marble, the horror of the architect played by Danny Scheie resounds through the intimate Aurora Theatre Company. An hors d’oeuvre has fallen on the floor, and after admonishing the clumsiness of his girlfriend, the architect demands a napkin and some vodka to clean it up. The marble is not stained, and the architect, one Gregor Zobrowski, calms down enough to say, “Crisis averted.” But is the crisis averted? Not even a little bit, and that’s the fun of Amy Freed’s The Monster Builder, a very funny riff on Ibsen’s The Master Builder (which the Aurora produced in 2006).

San Francisco writer Freed once again partners with the inimitable Scheie – past collaborations include You, Nero and Restoration Comedy – to create a comedy that skewers the world of egomaniacal “starchitects” and their sometimes godawful creations as well as the bad architectural taste of the general public that aims for nostalgia but settles for utilitarian garbage.

The fun of Freed’s play is watching Gregor navigate his giant ego through a cocktail party at his newly completed masterwork, an island residence made only of glass and marble with no walls and, apparently, no place but the floor to sit down (the humorous angular set is by Tom Buderwitz). Gregor is toying with a young married couple, Rita and Dieter (Tracy Hazas and Thomas Gorrebeeck), who run an idealistic architecture firm whose goal is bring back the commons in some way and help people come together the way they used to. 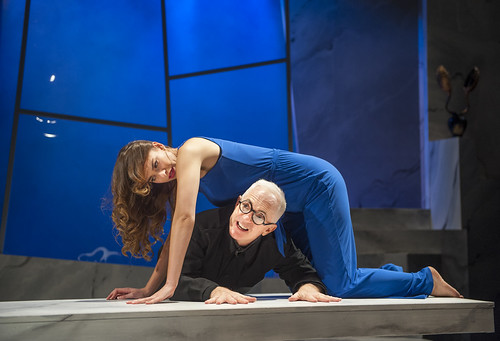 Gregor’s girlfriend Tamsin (Sierra Jolene) tries to fill in the social graces that the master architect lacks, but this is the Gregor show. Director Art Manke keeps the comedy fairly subdued at first. Scheie is strong and funny but reigns in what can sometimes be a wild on-stage personality. There’s a slow build, so to speak, at work here, and the payoff involves a leap into some theatrical wildness involving human sacrifice, revenge and the building of the Abu Dhabi Tower of Justice and Interrogation. Oh, and there may be something supernaturally Faustian going on as well. One of Scheie’s finest moments here (among many) is the astonishing measure of disgust he can express in three simple words: “arts and crafts.”

If Ibsen’s Master Builder had some sort of troll in his soul, well Gregor’s got something even bigger and nastier – a mystery that is only partly solved by play’s end. There’s a Young Frankenstein vibe to the second act of Monster Builder, and that’s a whole lot of fun. At one point, in full villain mode, Gregor is pounding out Bach’s Toccata and Fugue in the church he has converted into his office. It’s really just a set up so he can say to Rita, “Put your hand on my organ.” As smart as Freed can be, she also can’t resist a cheap joke, and we love her for that. Who else would reference an Alzheimer’s institute made of a series of mazes?

The game cast, expertly balancing zany farce and brainy comedy, also includes Nancy Carlin as an old-money dame with a juicy remodeling job and Rod Gnapp as her husband, a man whose occupation can inspire surprising reactions. There’s a lively camaraderie among the actors, and when, in Act 2, they all (save one) join together in a common pursuit, there’s a satisfying enjoyment in their efforts.

Part farce, part examination of the world we make for ourselves, The Monster Builder erects a lovely, lively structure around a dark heart that beats with the sounds of delight in every crack of humanity’s foundation.