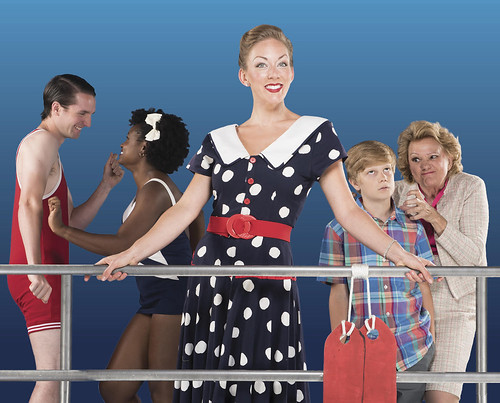 
Sail Away, the last musical for which the great Noël Coward wrote the whole shebang (book, music, lyrics), had two things going for it when it premiered on Broadway in 1961. First was the customary Coward wit, which shone in numbers like “The Passenger’s Always Right” and “Why Do the Wrong People Travel?” And then there was the show’s star, Elaine Stritch for whom Coward created the role of cruise hostess Mimi Paragon. Any show was better for having Stritch in it (Goldilocks anyone?), and the combination of her personality and Coward’s charm should have proven irresistible.

Reviews were decidedly mixed, however, and the show only ran five months. London audiences were much more receptive to Stritch and Coward, and the show ran nearly a year. But since then, Sail Away has done just that – it has pretty much sailed into obscurity, making it ideal fodder for the folks at 42nd Street Moon, the company that has spent the last two decades celebrating lost, forgotten and under-appreciated musicals.

The biggest challenge facing director Greg MacKellan would be finding an actor to play Mimi – filling the shoes of Elaine Stritch is a daunting task to be sure. But MacKellan found a ringer in Allison F. Rich, who had been such a standout in his Nick and Nora last spring. Rich is wry, sexy, statuesque and possessed of a powerhouse voice. On stage she’s something like a cross between Allison Janney and Carol Burnett, which is mightily appealing. 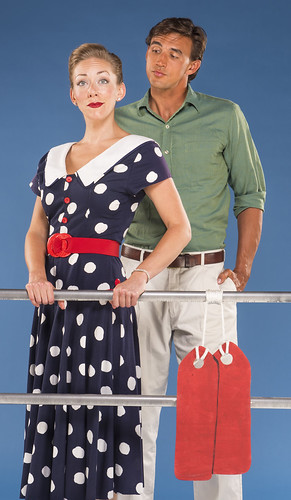 The whole show rests on Rich’s capable shoulders because Mimi is by far the most interesting character in the show. A failed actress who now cruises the high seas giving tours of ruins and organizing shuffleboard tournaments, Mimi has sass to spare, and on this particular cruise, she will far for a handsome younger man, a trust fund baby named Johnny Van Mier (played by the charming Lucas Coleman and put her cynicism to the test.

That’s really all that happens in Sail Away – a crusty cruise director falls in love, while around her, the various passengers do their best to come across as colorful even if none of them is terribly compelling.

There’s a secondary love story involving a sweet solo traveler, Barnaby (Nathaniel Rothrock) and Nancy (Khalia Davis), secretary to a famous romance author (the ever-amusing Darlene Popovic). Nancy has zero interest in taking dictation and is only on board for romance. Though she resists Barnaby at first, she succumbs to his earnestness and they dance through two Coward numbers attempting to be hip by 1961 standards, “Beatnik Love Affair” and “When You Want Me.” Their choreography, by Brittany Danielle has more than charm and does as much to develop their personalities as Coward’s rather wan book.

The rest of the passengers try to make up for the surprising lack of plot by being annoying. There’s the brash American couple, the Candijacks (Katherine Cooper and Davern Wright), the stuffy Brits, the Nutleys (Michael Patrick Gaffney, Maria Mikheyenko) and the lax mother (Ashley Garlick) and her out-of-control child (a fine Jordan Martin).

The Keats-spouting author, Elinor Spencer-Bollard, has a folksy comedy number, “Alice,” which Popovic delivers beautifully, and Lucinda Hitchcock Cone gets to be the overprotective mother of Johnny as Evelyn Van Mier, but her only function seems to be to disapprove loudly of Mimi’s excessive enthusiasm.

Musical director Dave Dobrusky at the piano with Nick Di Scala on woodwinds keep Coward’s score lively, and there are some delights here beyond the show-stopping final number (Mimi’s “Why Do the Wrong People Travel?”). Her duet with Martin on “The Little One’s ABC” yields some very satisfying laughs, and her “Useless Useful Phrases” is an enjoyable traveler’s lament.

Coward seems to be working in a decidedly Irving Berlin-meets-Rodgers and Hammerstein mode here, and while Sail Away is pretty bland compared to the much livelier Anything Goes, his attempt at an R&H ballad, “Later Than Spring,” is a lot like the show itself: enjoyable if not terribly convincing.