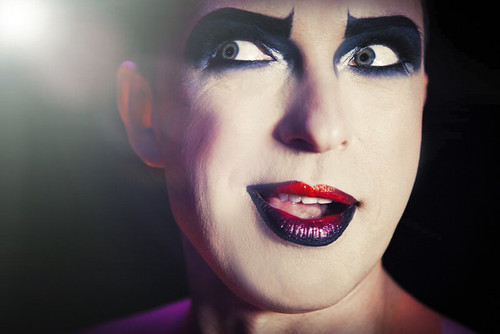 D’Arcy Drollinger as Frank-n-Furter in the Ray of Light Theatre production of The Rocky Horror Show at the Victoria Theatre. Photo by Erik Scanlon


Just in time for Halloween, Ray of Light Theatre invites us to come up to the lab and see what’s on the slab. Any prospect of a live Rocky Horror Show makes us shiver with antici….SAY IT!…………pation. And here’s the good news: this Rocky is a rollicking ride through one of the most beloved cult musicals of all time.

Jason Hoover, Ray of Light’s artistic director, is at the helm of this full-scale production, which Ray of Light last produced in 2008 when Hoover played Brad Majors, one half of the imperiled couple trapped in a remote and mysterious castle on a sultry, stormy night. With a game cast and some terrific singers, Hoover delivers a high-energy, high-camp Horror that will satisfy even diehard fans of the show and its more popular movie version.

At the center of the action, in the towering heels and fishnetted legs that go on for days, is D’Arcy Drollinger as Dr. Frank-n-Furter, the sweet transvestite from transexual Transylvania. Drollinger looks and sounds great, and boy, does he know how to command a stage and work an audience. He’s especially funny at the top of Act 2 when, in shadow, he seduces Brad (Ryan Cowles) and Janet (Chelsea Holifield) individually, corrupting each in the process.

Cowles and Holifield make for an appealingly nerdy couple learning to swim in the warm waters of the sins of the flesh, and on the other end of their spectrum are Frank’s minions, Riff Raff (Paul Hovannes), Magenta (Tielle Baker) and Columbia (Mary Kalita), who lead a rousing “Time Warp.” Hovannes has a spectacular voice, which he puts to good use in a powerhouse “Over at the Frankenstein Place.”

Choreographer Bobby Bryce makes the bustier-clad chorus of phantoms work hard, but he gets great results. There’s energy to spare here, and with his sassy moves, even secondary numbers like “Once in a While” come alive.

Steve Hess has some fun in the dual role of narrator and Dr. Scott, though at Wednesday’s opening night performance, he seemed a trifle thrown by the very active audience participation component involving a select few failing to miss an opportunity to throw up classic and newly fashioned retorts to the dialogue on stage. (My favorite audience jab of the night came at the beginning of Janet’s “Touch-a, Touch-a, Touch Me” with the audience line “Tell us about the Giants” preceded her lyric “Couldn’t win.”) This is Rocky Horror, after all, the world’s most famous interactive experience, and though this production forbids the throwing of anything (rice, toast, toilet paper), there’s no ban on tossing off comments (“Asshole!” for every time Brad’s name is spoken, “Slut!” for Janet’s).

Some audience members seemed to love the audience interaction, others were mildly annoyed. But you’ve gotta do what you’ve gotta do, and for some, that means being part of the show. And honestly, this is such a fun, lively production, who wouldn’t want to be part of it? The gothic set by Kelly Tighe is especially inviting – a grand, sweeping staircase takes up most of the rear of the stage, with cascading red drapes and dripping white candles.

Also adding some pizzazz to the cast are Alex Rodriguez as the barely dressed Rocky who also happens to be a snazzy dancer and Madeleine Pla as the usherette who starts the show with “Science Fiction/Double Feature” and then later as bad boy Eddie.

Just as A Christmas Carol has become the winter holiday perennial, Ray of Light makes a strong case for the annual revival of The Rocky Horror Show, especially with Drollinger as the king and queen of it all.