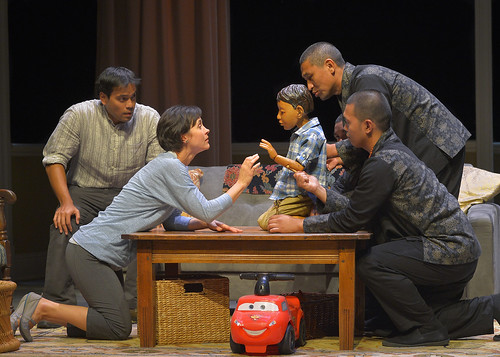 Kurt Uy (left, as Father) and Christine Albright (as Mother) interact with their 3-year-old son, Tenzin, a puppet operated by Tsering Dorjee (Bawa), Jed Parsario and Melvign Badiola in the Marin Theatre Company production of Sarah Ruhl’s The Oldest Boy. Below: Mother and son have a moment in India. Photos by Kevin Berne

Now making its West Coast debut at Marin Theatre Company, Ruhl’s The Oldest Boy is in some ways very conventional: a well-heeled mother and father in the United States are conflicted about the education of their young son. But the circumstances surrounding this conflict are quite extraordinary. Their 3-year-old has been deemed an incarnate lama, the reincarnated soul of a “tulku” or high-ranking lama. Two monks arrive from India (where so many Tibetan Buddhists live in exile from their conflicted homeland) with the news, and the parents must decide if they will relinquish their son to life in a monastery on the other side of the world.

This news is perhaps more shocking to the mother (Christine Albright), who was raised Catholic in Ohio and has been a spiritual wanderer since, than it is to the father (Kurt Uy), a Tibetan who grew up in India and now operates a popular restaurant in an unspecified American city. 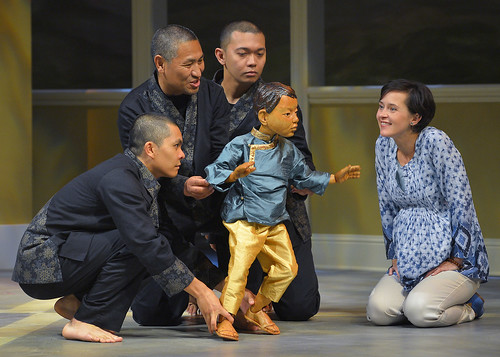 With the surprise arrival of a monk (Wayne Lee) and a lama (Jinn S. Kim), it quickly becomes clear that there is little doubt that the child is the reincarnation of the lama’s former teacher (who died three years previously), so the parents must decide how they will proceed. For a mother who is practicing attachment parenting, this is a jolt to be sure.

Ruhl doesn’t really spend much time with the “is he or isn’t he” issue of the child’s reincarnation, and the parents don’t fight much about the fate of their child. So there’s not a whole lot of conflict in this play, but there is a whole lot of feeling. When the action shifts to India, there’s also tremendous beauty in the ritual we see (Collette Pollard’s set is gorgeous, as are the costumes by Fumiko Bielefeldt and the lights by Jeff Rowlings).

At the heart of the story is a little boy, Tenzin, represented by a bunraku-style puppet operated by Tsering Dorjee (Bawa) (who also provides the choreography), who provides the voice, and Melvin Badiola and Jed Parsario, who give astonishing expression to his body (the fantastic puppet is by Jesse Mooney-Bullock). There wasn’t one moment in this two-hour play when I didn’t feel the reality of the child, even though he was an obvious theatrical contrivance. That has a lot to do with the artistry of the puppeteers, Ruhl’s script and Albright’s strong central performance.

Director Jessica Thebus pulls nuanced, naturalistic performances from her actors, and that keeps the play grounded in reality, even when Ruhl stretches credibility in Act 2. We experience this story from the perspective of Mother, and Albright is a powerful focal point as we see her using her considerable intellectual abilities (she’s a literature professor, adjunct as she’d point out) to try and open up her spirituality and to the hardest thing a parent has to do: let go of a child. As she points out, “The cruel animal fact of motherhood is bigger than any idea.”

The play and this stunning production never lose sight of that, and The Oldest Boy turns out to be one of the more moving theatrical experiences I’ve had for a while.