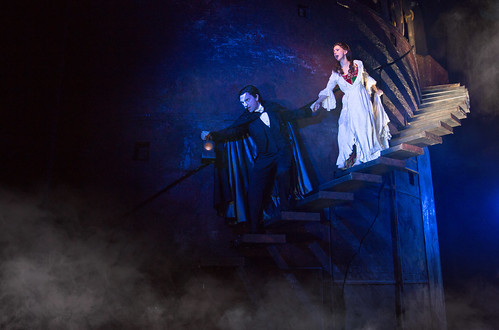 Chris Mann is The Phantom and Katie Travis is Christine Daaé in the new touring production of The Phantom of the Opera at the Orpheum Theatre as part of the SHN season. The new production, with a new director and design team, forgot to pack the staircase for the Act 2 opener, “Masquerade” (below). Top photo by Matthew Murphy. Bottom photo by Alastair Muir


I come by my loathing of Andrew Lloyd Webber’s The Phantom of the Opera honestly. I started out loving it beyond measure and slowly grew disillusioned to the point of feeling groggy at the mere mention of “The Music of the Night.”

As a student at the University of London, I was devouring all the theater I could, and when Phantom had its world premiere in the fall of 1986, I waited hours in line for a return ticket so I could see what all the fuss was about. Of course there was the crashing chandelier that reportedly made Princess Diana shriek when she saw it. I’m sure director Harold Prince doesn’t love that the greatest hit of his long, distinguished theatrical career is a fast-ascending piece of scenery. There was all the rich texture and gobsmacking beauty of Maria Björnson’s sets and costumes and the powerhouse performance by Michael Crawford in the title role.

I was dazzled and quickly became a “phan,” as the Phantom fans are known. I devoured my double-cassette original cast recording. I wrote Crawford a fan note and framed his reply. I was thrilled when the show took Broadway by storm in 1988. Shortly after I moved to San Francisco, Phantom took up residence at the Curran Theatre for about six years, and that’s when the shine began to dull for me. Whenever anyone came in from out of town, they’d want to see Phantom, and the more I saw it (the production was a top-notch re-creation of the London version), the less I liked it. I was seeing so much theater, and so much of it had depth and real passion, two things sorely lacking in Phantom, which is the most honestly smoke-and-mirrors musical theater I know.

And now we have a “new” production of The Phantom of the Opera with a new director and a (mostly) new design team. Just as he did with Les Misèrables, director Laurence Connor has attempted to freshen up what was definitely becoming a stale property (albeit one that remains as popular as ever). For Les Miz he got ride of the iconic turntable, and guess what? He has made a turntable set the centerpiece of his Phantom!

Back in San Francisco as part of the SHN season, this revamped Phantom scores points for (unlike Les Miz) not leaning too heavily on projections as a means of streamlining the show (and turning it into a video game). The sets are bulky and real, a thick, revolving column at the center of the stage serving as a swift means to whisk us to various locations in the Paris Opera House.

The chandelier falls, of course, though it doesn’t crash onto the stage anymore. It sparks and flares and drops quickly toward the heads of those in the orchestra section. It’s not impressive, nor is the shooting of flames from the chandelier when it rises to its position during the auction scene at the top of the show. It looks like a rocket prop from an Elton John concert, to be honest.

Director Connor wisely keeps the late Björnson’s original costumes, though he eschews the bulky costumes of the “Masquerade” number for more generic jewel-toned outfits and simple masks. He also does away with the staircase for that number, so it’s not as impressively staged. There are mirrors and some nice choreographic moves (by Scott Ambler), so it’s all very pretty. Just not prettier.

It seems that Connor’s goal here might have been to render Phantom on a more human scale and bring it all back from the glossy, gimmicky, mechanized theme park attraction it had become (nothing wrong with theme park shows…when you’re in a theme park). He accomplishes that somewhat, deftly balancing spectacle with intimacy, but letting the characters stand on their own isn’t necessarily a good thing. The book by Lloyd Webber and Richard Stilgoe is even shallower than the original novel by Gaston Leroux, and it asks a lot of the actors to imbue the cardboard characters with something resembling human emotion or rationality.

At 2 1/2 hours, this production clips right along with all the requisite stops on the roof of the Opera (for “All I Ask of You,” which now features a Phantom skulking behind statues rather than riding an angel that descends from the proscenium) and the depths of the Opera, where the Phantom keeps his lair on the shores of an underground lake (theres still a foggy boat ride but minus a whole lot of wobbly electric candles). The best part of the new rotating set involves a wooden staircase that appears and disappears as the Phantom lures Christine into his world.

Both the Phantom and Christine have been cast younger this time around, which makes sense, although Chris Mann doesn’t quite have the vocal heft to pull it off, and Katie Travis over-enunciates so much it sounds like she’s singing in a foreign language. Mann comes off as petulant much of the time, with his strongest moments toward the end when the unmasked Phantom is most vulnerable. Travis warbles prettily, but her one solid dramatic moment comes in “Wishing You Were Somehow Here Again.” Neither Mann nor Travis can escape the embarrassment of the title song, complete with its ridiculous drum machines and a tinny sound design that makes them sound pre-recorded.

Vocally, the ensemble numbers are strong, though the group musical numbers in the managers’ office while reading notes from the Phantom still sound like musical goulash.

I like that Lloyd Webber and his money team are investing in a re-envisioned hit, and there are moments in this new production where I can see why I fell for the show and why I outgrew it. Watching it, I couldn’t help thinking we don’t really need to spend more money on a new production of Phantom. We need a new show altogether. Time to move on. Maybe we can attempt to re-discover the hidden depths of Phantom in 2030.

1 thought on “Humming the chandelier: Phantom 2.0”