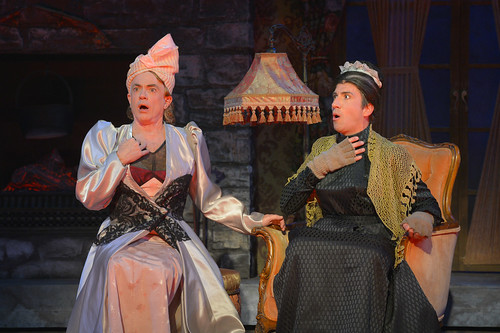 
How appropriate to go (high) camping under the stars in the Orinda hills with the California Shakespeare Theater. One doesn’t think of Charles Ludlam’s The Mystery of Irma Vep as a play for the great outdoors, but now-former Artistic Director Jonathan Moscone and his dynamic actor duo make a strong case for Ludlam being funny anywhere.

As swan songs go, Moscone picked a doozy, if only because he leaves them laughing. As Moscone exits the building for San Francisco’s Yerba Buena Center for the Arts, he can be proud of an extraordinary 16 years with Cal Shakes during which he helped transform the company into one of the Bay Area’s finest, most inclusive and most ambitious. It has been a serious decade and a half, and his delightful dance with Irma seems all the more celebratory for it.

This is the third time Moscone has directed Ludlam’s 1984 love letter to low horror and high camp, and it’s the second time we’ve seen Danny Scheie in the role after his turn with the Aurora Theatre Company in 1997, which was re-mounted by the Magic. And the thing about Irma is that it never gets old. There’s a zany energy that’s simultaneously sending up, deconstructing and lavishing love on the ye olde penny dreadful take on gothic horror. Two actors play all the parts, with the gimmick (and the quick costume changes) part of the ongoing joke. Scheie’s partner in this mayhem is Liam Vincent, another Bay Area stalwart whose chemistry with Scheie is immeasurable. There’s one scene in which Edgar and Enid say each other’s names over and over again until it’s clear there’s a sexual roundelay going on, and it’s deeply hilarious.

Werewolves, vampires, mummies, flickering lights and thunder claps are part of the general recipe here as the estate of Lord Edgar Hillcrest (Vincent) welcomes a new lady of the manor in Lady Enid (Scheie). There’s still a portrait over the fireplace of Lord Edgar’s first, now late, wife, Lady Irma, and before the show is over, that portrait will run with blood and come to frightening (in theory) life. There’s a Scottish groundskeeper, Nicodemus (Scheie), and a Teutonic maid named Jane (Vincent) as well as various demons and monsters, and it’s all quite deliciously predictable. 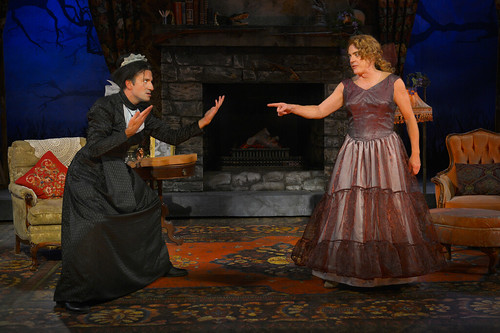 Scheie’s flouncy Lady Enid, who has (horrors!) spent time on the stage, is, at one end of the spectrum, like Dame Maggie Smith in “Downton Abbey” – but younger – and, at the other end, like Dame Maggie Smith in “The Best Exotic Marigold Hotel.” Vincent’s Jane conjures memories of Cloris Leachman’s Frau Blücher in Young Frankenstein, and his Lord Edgar is movie star handsome and statuary stolid. As Nicodemus, he with the wooden leg and yen for the milkmaid, Scheie sports an accent that is ripe and rangy and always good for a laugh.

Set designer Douglas Schmidt wisely blocks off much of the gorgeous view behind the stage to focus attention on the stately English manor directed with skulls and a howler monkey and some fabulous footlights made out of the comedy and tragedy masks. Lighting designer Alex Nichols and sound designer Cliff Caruthers get an exercise in thunder and lightning effects, and they were ably assisted last Wednesday night by actual strong breezes and rustling tree leaves.

The creative team member whose work proves invaluable is costumer Katherine Roth, who has to hurry her actors in and out of English formalwear and monster getups. Her creations are marvelous, and there’s an especially enjoyable moment in the long transition from scenes in an Egyptian tomb (involving a Cher sparkle wig and the song “It’s Raining Men”) back to the manse known as Mandacrest. Vincent’s Lord Edgar sings a kicky version of Sinatra’s “Witchcraft” while the backstage crew slowly transforms him into Jane the maid. It’s a gust of fresh theatrical air to liven up an already lively meta-theatrical enterprise.

In just about everything he’s in, Scheie exhibits an inexhaustible energy, and that is certainly the case here, but Vincent matches him volt for volt, but Scheie still launches more vocal fireworks than any comic actor I’ve ever seen. Irma Vep offers a great, scene-chewing showcase for him, although it’s nice to see Vincent getting a well-deserved leading man moment of his own.

The Mystery of Irma Vep is a little on the long side, two-plus hours, but the actors and the backstage crew (who get to take a bow with the actors) keep the evening lively, and the big laughs just keep rolling and rolling on into the night. For fans of Moscone’s, that makes for a pretty sweet swan song.

[bonus interview]
I talked to Moscone and many of his admirers for a pair of stories in the San Francisco Chronicle. Read the main feature here and the sidebar on Moscone’s favorite Cal Shakes moments here.