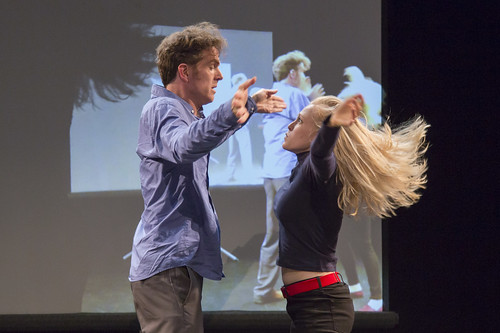 Mark Jackson and Megan Trout are the creators and performers of Now for Now, a captivating performance piece that involves theater, dance and technology at Z Below. Photos by Tracy Martin


I’ve never seen anything quite like Now for Now, the new theatrical work devised and performed by Mark Jackson and Megan Trout now at Z Below through July 26 (time is short – go see it). Because I have long admired Jackson as a director, writer and sometime actor, I would be intrigued to see any new work he created, especially something he was performing in, and Trout, in only a few years, has become one of the most exciting performers on the local theater scene (which always sparks apprehension that seek greener pastures elsewhere). As two dynamic and acutely interesting theater people, Jackson and Trout make for an intriguing combination on paper and, happily, that intrigue (and a whole lot more) extends to the work they have created.

To tell you anything specific about Now for Now would be giving too much away because so much of the joy of this piece is reveling in its surprises, its patterns, its emotional and intellectual intelligence.

Suffice it to say that the work is challenging, occasionally uncomfortable, very funny and quite moving. There is dance, there is theater (monologue and dialogue), there is technology. There is direct address to the audience and there is a fascinating exploration of either one relationship seen from three different angles or three different relationships seen from one common core. Whatever, Jackson and Trout employ recurring life events and details to tell the story of a father and a daughter, a pair of lovers and a teacher and a student. 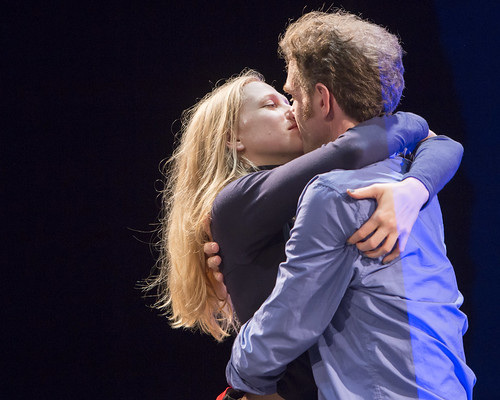 Each story begins and ends the same way, and in between each telling, there’s dance (or movement or whatever you call two people moving around a stage and each other in compelling, character-driven ways). There’s hostility, love, sex, stunts, goofiness and grace (and some great music). There’s also a fair amount of honesty about things that can be pretty embarrassing – that’s the source of humor as well as discomfort.

Technology comes into play in multiple ways. During the monologues, the actors park themselves in front of a laptop and use it as a prompter. They control music from the computers as well as projections on a rear screen, which often come from the smart phones in their hands. During one monologue, an actor tells a story while the other sits and listens in front of another computer as if on Skype, with that actor’s face (and responses to elements of the story being told) projected on the rear screen.

Texting comes into play as well, and if you think it can’t be interesting to watch two people text on stage, think again. It’s all about context and the story being told.

Now for Now is probably not for everyone. At the beginning, Jackson says the show will be pretty straightforward and you’ll know by the end if you like it or not. Trout says that show will be abstract and poetic and definitely not linear. They’re both right, and that’s what makes the show so interesting. There’s performance art indulgence, or so you might think, but there are no loose strands here. It may seem loosey-goosey at times, but there’s intention and intelligence behind everything. Jackson and Trout are disarming to the degree that they make the show seem, if not easy, then very much of the moment and filled with the sparks of creation and discovery. Individually, Jackson and Trout are extraordinary. Together they are…wow.

FOR MORE INFORMATION
Megan Trout and Mark Jackson’s Now for Now continues through July 26 at Z Below, 470 Florida St., San Francisco. Tickets are $15-$25. Visit www.zspace.org.
NOTE: Now for Now is going on the road, and donations are welcome at www.nowfornowsf.org.

1 thought on “Trickle down theory: parallel lives in Now for Now”