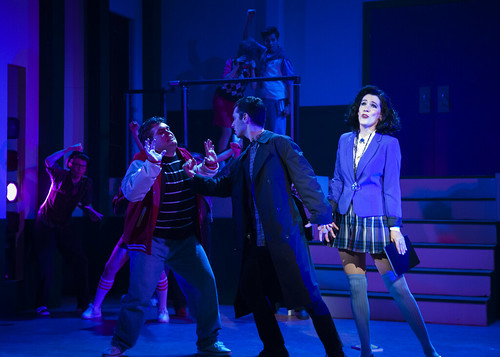 
Funnier and feistier than the movie on which it’s based, Heathers: The Musical is an exceedingly successful screen-to-stage adaptation, and San Francisco’s Ray of Light Theatre is just about the perfect company to produce it.

Heathers, which features a score and book by Laurence O’Keefe (of Bat Boy and Legally Blonde fame) and Kevin Murphy, (Reefer Madness, “Desperate Housewives”), is dark and damaged in all the right ways. But the musical amps up the fun factor with the ideal amount of camp. It winks and nods to the 1989 movie but lets the story be the story, with all its attendant snarkiness, teen angst, murder and sincere hope for a more beautiful life.

All of that lands right in Ray of Light’s wheelhouse. Hot on the heels of shows like Carrie: The Musical and Yeast Nation (from the Urinetown team), ROL is emerging as the city’s best source of edgy musicals performed with seemingly depthless raw energy and talent the likes of which other theaters must surely envy.

The young and exuberant cast and the wicked, tuneful show combined with an opening-night audience overflowing with audible adulation made for a kind of pop-rock musical nirvana. This kind of show too grungy, fun and primal for Broadway-type houses, but the Victoria Theatre is the perfect raw nerve kind of a place for this sort of musical to really take flight. There’s a bit of that “Hey, kids, let’s put on a show!” energy backed up by the talent and panache to make the $25-$36 ticket price one of the best deals in town. 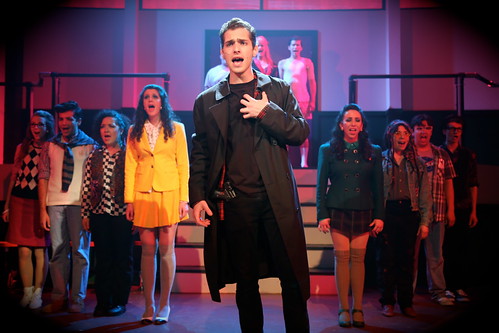 From the first number, “Beautiful” (which depicts an Ohio high school experience that is anything but), it’s clear that the show and the production are going to hit the right notes of humor and horror. And leading lady Jessica Quarles is a showstopper in multiple ways: her voice, her performance and not least of all, her pitch-perfect channeling of Winona Ryder’s Veronica Sawyer while avoiding slavish imitation.

Within that one number, we’re immersed in the toxic world of a high school full of bullies and the bullied and the three queens who rule it all: the Heathers (Jocelyn Pickett as Heather Chandler, Samantha Rose Cardenas as Heather Duke and Lizzie Moss as Heather McNamara). In their primary colors, ‘80s shoulder pads and big hair (costumes by Katie Dowse), the Heathers pop and lock with bitchy authority in Alex Rodriguez’s delightful choreography. They’re fierce and they know it.

Once Veronica falls in with these popular mean girls, it’s only a matter of time before her heart and their viciousness will battle to the death, but when Veronica meets the enigmatic, trench coat-wearing JD (Jordon Bridges), that death becomes more than metaphorical.

As the body count begins to rise, the tone of director Erik Scanlon’s production shifts just enough to make the insanity of Westerberg High School and its seeming wave of student suicides both believable, funny and sad.

The Act 2 opener is set at the funeral of two brutish jocks (Paul Hovannes as Kurt and Nick Quintell as Ram), who are believed to have killed themselves as part of a gay love pact. The song, “My Dead Gay Son,” is performed by their dads (Mischa Stephens and Andy Rotchadl), and it is hilarious, sweet and surprising – easily one of the best Act 2 openers in recent memory.

Heathers: The Musical has all the pop hooks and renegade spirit of a big hit, a sort of full-throated revenge fantasy for anyone who has lingering high school damage, which pretty much means all of us.

[bonus interview]
I talked to leading lady Jessica Quarles (who plays Veronica Sawyer) about her experience with Heathers: The Musical for a story in the San Francisco Chronicle. Read the interview here.