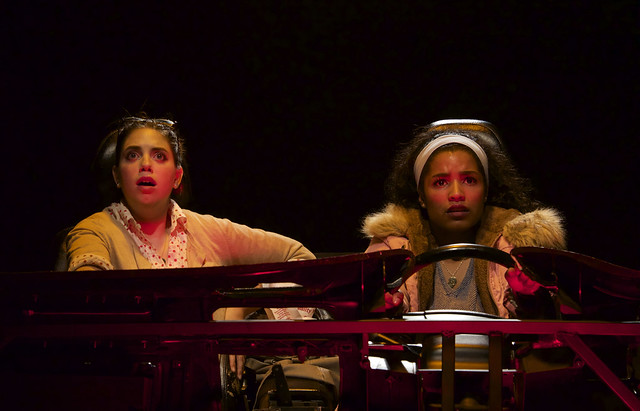 Sarah Matthes (left) is Jess and Taylor Jones is Lexi in Lauren Yee’s Hookman, described as an “existential slasher comedy.” The Encore Theatre Company production continues through May 30 at Z Below. Below: Back in her Connecticut dorm room, Lexi encounters the energetic Chloe (Aily Roper). Photos by James Faerron


Leave it playwright Lauren Yee to bring clear definition to the sub-genre “existential slasher comedy.” That’s exactly what her Hookman is, a fascinating world-premiere play from Encore Theatre Company that draws laughs from teen speak and the usual first year of college tropes but blends in a rich and disturbing examination of loss, responsibility, maturity and what it is to be a young woman in the 21st century.

Is the man with the hook a real serial killer? Did a drunk driver really subvert Lexi’s life and kill her best friend? Is everyone on campus really consumed by demonic seizures and blood lust? Those are some of the questions plaguing Lexi (Taylor Jones), a college freshman whose first return home to California for break didn’t go as planned. She and bestie Jess (Sarah Matthes) did their usual thing: late-night run to In-n-Out then a midnight movie, but amid their friendly car chatter (set designer James Faerron delivers a simple but effective onstage car), there emerges some tension and the kind of growing pains that come from high school friends moving on to different lives on different coasts.

Then tragedy strikes, and when Lexi gets back to school on the East Coast, life is decidedly different and more sinister. Her energetic but enigmatic roommate, Yoonji (Katharine Chin), can’t wait to post the news about Lexi’s involvement in a fatal accident but is willing to attempt sympathy because, as she keeps saying, “your friend died.” 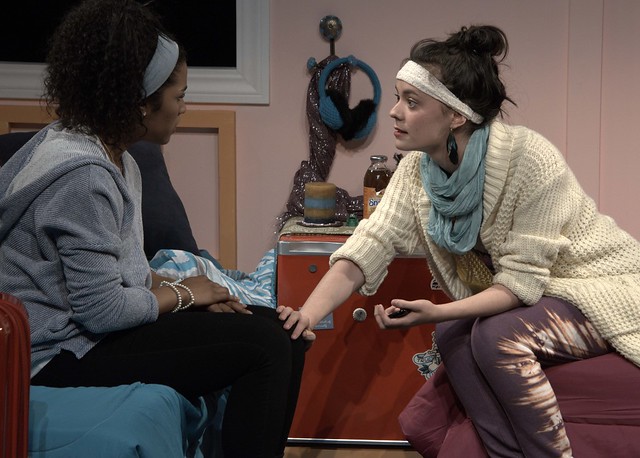 Lexi doesn’t want to drive in cars, she doesn’t want to go to class. She doesn’t really want to leave her dorm room. What starts out as a funny Skype session with a maybe boyfriend (Devin O’Brien plays all the guys), turns, as things in this play tend to do, dark and serious, indicating that the accident isn’t the only thing tormenting Lexi.

It’s highly likely that all the weirdness in the winter world of Connecticut is a reflection of Lexi’s inner turmoil, but let’s just say it’s really bloody (and bloody interesting) weirdness. Director Becca Wolff delivers a fast-paced 75-minute play with a cast that seems to come more and more to life as the play continues to deepen and darken. Jones’ Lexi is a compelling central character, complex and unreliable as she strains to make sense of grief and guilt and growing pains. Matthes and Chin are colorful characters in Lexi’s life with their talk of otters, Joan Didion and Jameson’s Irish whiskey, but the stage really comes to life with the entrance of Aily Roper as Chloe, a high-energy coed with a penchant for petitions and protests and almost Tourette-like truth telling. Roper has the kind of wild, unpredictable presence that feeds the unsettling nature of this comedy. Sure it’s funny, but it’s also deadly serious, and so is Roper (whose pre-curtain call routine is priceless).

Jessica Lynn Carroll makes a late-in-play appearance as a high school sophomore to haunt your dreams and pierce your hopes for the future of civilization, and though there’s a less bleak ending, a grim weight still presses down after the bows.

In Yee’s Hookman, it’s not the slasher part that’s upsetting (some of the blood effects are quite good), nor is is the comedy that prickles. It’s that existential part that draws blood.