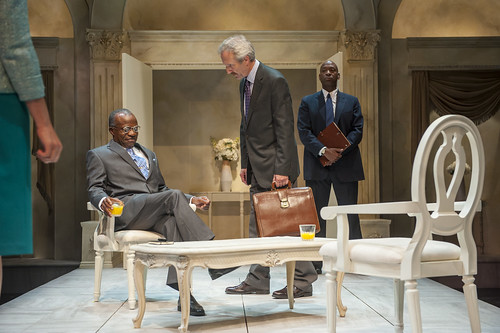 
I can’t imagine the choosing of a tie or the pouring of orange juice has ever been more sinister as it is in Fraser Grace’s Breakfast with Mugabe, now on stage at Berkeley’s Aurora Theatre Company.

One of the delights of the Aurora has always been its intimacy. The audience sits on three sides of the stage, and everyone feels part of everything happening on stage. Strictly from a theatrical point of view, that allows us tremendous access to every detail of the performance and allows us into the nuance of a beautifully written script.

That intimacy is all well and good…unless you’re dealing with a monster. And that’s essentially what we hve in Mugabe, making its West Coast debut after hit runs with the Royal Shakespeare Company and in New York. It’s not just Mugabe (L. Peter Callender), the longtime president of Zimbabwe, who’s the monster. He is, perhaps, suffering from acute psychological issues, but his power structure is firmly in place and making itself known through his bodyguard, Gabriel (Adrian Roberts), also an intelligence agent, and Mugabe’s much younger second wife, Grace (Leontyne Mbele-Mbong), an ominous presence dressed up in elegance.

Our entrance into Mugabe’s world circa 2001 is through Dr. Andrew Peric (Dan Hiatt), a psychiatrist summoned to the State House in Harare. A white native of the country, Peric attempts to keep control of the situation from the start and remain as professional as possible, but it soon becomes clear that the control he usually requires with his patients won’t be happening here. 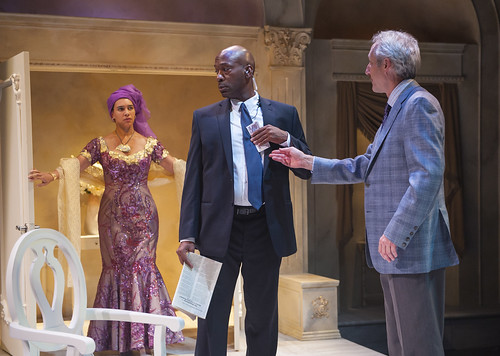 What is so interesting about Grace’s play is that he takes his cue from history – it is said that Mugabe was indeed treated by a white psychiatrist – but rather than creating a documentary-like drama, he taps into his inner Shakespeare and gives history a Macbeth-ian, Richard III-ian spin. This Mugabe is seeing ghosts – literally. He’s haunted by an “ngozi” or the aggressive spirit of a restless soul, and it’s not some nameless spirit either. It’s Josiah Tongogara, a commander of the ZANLA guerrilla army whose death in a car crash (cause unknown) paved the way for Mugabe to become prime minister.

The psychiatrists’ job is to treat Mugabe and get to the source of his anxiety and his visions (hallucinations?). It’s game of psychological cat and mouse, though, as Mugabe (and his team) are toying with the doctor as well and his long-held family estate that may or may not be taken over by soldiers.

Director Jon Tracy keeps the action taut, though there are dull spots in Grace’s script. His lead actors, Callender and Hiatt, are each at the top of their considerable game, which is saying something. They know their Shakespeare and they know naturalism, so the balance they create is just about perfect for this 100-minute show down.

Confined within the elegance of the presidential home (set design by Nina Ball), the story grows darker and darker, and the stakes grow higher. Tracy, working with video designer Micah Stieglitz, brings the world into the palace via fuzzy TV news montages, flashes of headlines and, most effectively, in live video surveillance of Dr. Peric. If it feels like the play doesn’t know where or how to end, just wait. Grace’s conclusion is absolutely chilling. Clearly you don’t have breakfast with Mugabe. He has you for breakfast.