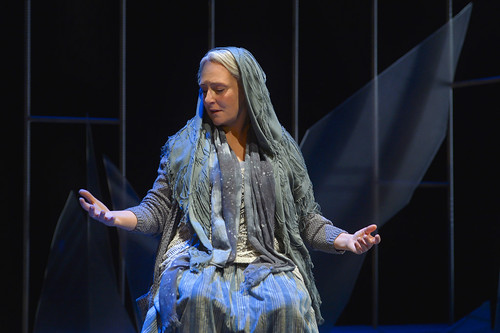 
Has any mother ever inspired so much and such varied art?

Colm Tóibín’s Testament, now at American Conservatory Theater, is another in a long line of interpretations of Mary, mother of Jesus. In is version, which started life as a Dublin play, then became a novel before being turned into a different play on Broadway last year, Toibin is interested in the humanity of Mary, a mother first and foremost, and a citizen caught up – rather unwillingly – in a dangerous rebellion.

Directed by ACT Artistic Director Carey Perloff and starring revered Canadian actor Seana McKenna (previously seen at ACT in Napoli! and Phèdre), this Testament is steeped in grief and fear and anger. A mother watched her son carried away by a movement she didn’t really understand and was, she tells us frankly, didn’t like. The earnestness of the followers, she tells us, bored her.

In his taut script, Tóibín creates a world of tension outside Mary’s door. The cultural and political shifts that led to her son’s execution are still raging. While she copes with the loss of her son, she’s still dealing with fallout of the movement in the form of the brutes and the notetakers who plague her life and ceaselessly record (and warp) her story. There’s a real sense of the modern world in this tension in the form of government brutality, paranoia, extremity and danger. But there’s also uncertainty in who are the bad guys and who are the good guys – it doesn’t seem, at least from this perspective, that there are any good guys, and that’s a grim notion. 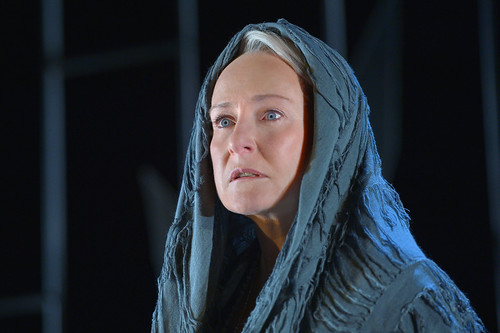 McKenna exhibits a lovely grace in her performance, and that underscores everything else we see in Mary: strength, ferocity, heartbroken anguish. McKenna is just a few degrees larger than life to fill the cavernous Geary Theater with her strong voice, but she’s also recognizably human – an older woman coping as best she can, sharing her deepest fears and darkest recollections in a moment of solitude (with an audience). Set and lighting designer Alexander V. Nichols surrounds McKenna with a towering skeletal structure and giant shards of what looks like shattered plastic – a harsh landscape for an agonizing story (though mostly passive the sets and lights do become active toward the 80-minute show’s end, creating the unfortunate image of an edgy dance club).

Even at its most intense – the recounting of the actual crucifixion is almost unbearable – Testament keeps a certain distance. Mary’s is a story full of emotion, but McKenna is not weeping and wailing like a Trojan woman. She’s pretty self-contained, which somehow makes her story even darker and angrier and sadder. If she’s closed off at all, it’s probably an act of self-preservation.

Testament pissed off people when it was in New York, and perhaps anybody’s interpretation of this story that doesn’t follow the standard line is subject to anger. But really, Tóibín’s take on it is compassionate and relatable and contemporary. It all comes down to a mother grieving the son whose life and work ultimately challenged and upset her. She’s in the long process of reconciling her feelings and history and the aftermath of an uprising. Amid all of that, she has people telling her that her son died for the sins of all people? The look on McKenna’s face when faced with that notion is remarkable. This Mary is not some passive portrait of motherly beneficence etched in stone or in strokes of a paintbrush. She is flesh and blood and has an extraordinary tale to tell.

[bonus video]
Probably my favorite piece of Mary-related Mary art is Patty Griffin’s song “Mary” from her 1998 Flaming Red album. For this live version, Griffin is joined by Natalie Maines of the Dixie Chicks.