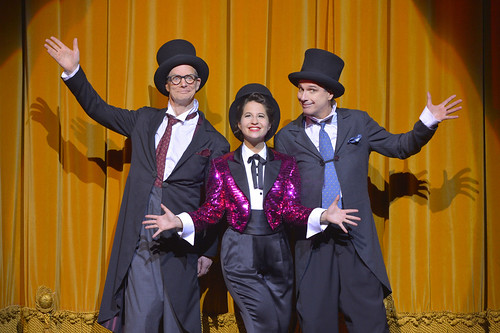 Bill Irwin (left), singer/songwriter Shaina Taub (center) and David Shiner light up the Geary Theater in the Signature Theatre production of Old Hats, the season opener for American Conservatory Theater. Below: Shiner and Irwin have a classic clown encounter. Photos by Kevin Berne.


I will be the first to admit that clowns have never been a favorite of mine. Not circus clowns, not hobo clowns, not mimes, not even a lot of commedia dell’arte rigamarole. Occasionally, however, I get it – I get the comedy, I get the poignancy, I get the masterful balance of comedy and tragedy in the pursuit of laughs.

And by far my favorite clowns – the ones who do it better than just about anybody – are Bill Irwin and David Shiner. Their Full Moon was a revelation both times it was at American Conservatory Theater, and because of that, I expected great things from their latest collaboration, Old Hats, a production of New York’s Signature Theatre that opens the ACT season.

Expectations are dangerous in the theater, but I had them, and Irwin and Shiner more than delivered. This show is as funny and as sweet and as salty as the last one with the added bonus of having the wonderful Shaina Taub on hand to sing her songs and front a fantastic band.

I reviewed Old Hats for the San Francisco Chronicle. Here’s a peek:

…now they’re back to open ACT’s season with a victory lap they like to call “Old Hats.” A hit last year for New York’s Signature Theatre, the show is two hours of gratifying laughter in the company of two masters who don’t seem to have aged a day in the 13 years since we last saw them perform together.
They may be flirting (or have flirted) with 60, but these clowns are ageless as long as they’re on stage wearing baggy pants, oversized coats and clown shoes (costumes and set design by G.W. Mercier). Whether they’re performing hat tricks, ribbing each other or performing a good, old-fashioned vaudeville dance, they do everything with a polish and precision that makes everything look natural and easy. 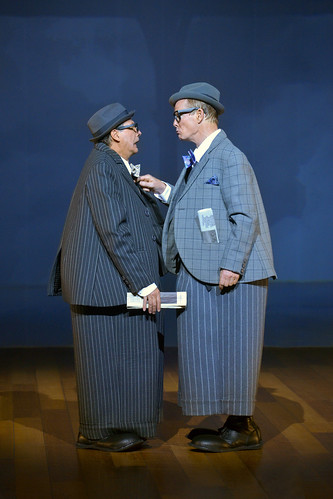