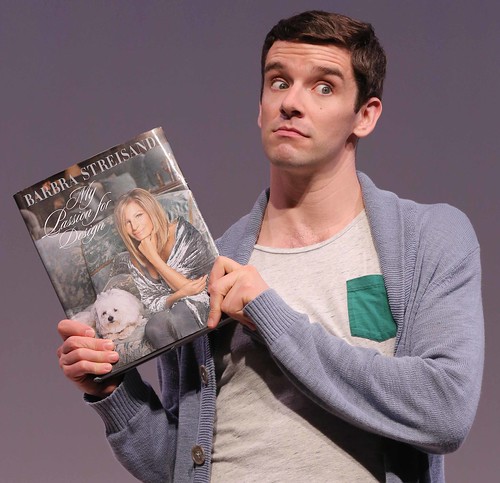 In Jonathan Tolins’ Buyer & Cellar, Michael Urie plays unemployed actor Alex More, who gets a prime gig watching the “shops” in Barbra Streisand’s Malibu basement. The one-man show is at the Curran Theatre as part of the SHN season. Photos by Joan Marcus


Michael Urie is so freaking charming it’s outrageous. The erstwhile scene-stealer from “Ugly Betty” landed in a one-man off-Broadway hit more than a year ago, and he’s had the good sense to take this show – the perfect showcase for his prodigious talents – on the road, just like the big stars of yesteryear used to do.

The play is Buyer & Cellar by Jonathan Tolins, a fantasia on Barbra Streisand, which is to say an examination of fame, wealth, creativity and loneliness, among other things. It’s a fascinating play with deep wells of compassion for the rich and famous and for the poor and ignored.

But perhaps above all else, it’s funny. Really funny. It feels so good to be in such reliable company as Urie, Tolins and director Stephen Brackett, all of whom take good care of the audience. Everything is carefully calibrated to allow us to relax into the situation as Urie begins the 100-minute play in a very self-effacing way, endearing himself to the audience and ensuring us that what we’re about to see is purely a work of fiction inspired by something almost too strange too be true but that is in fact, the truth.

In her 2010 coffee table book My Passion for Design, Streisand details the labor of love (and frustration) that is her own personal utopia: her Malibu compound where she lives with husband James Brolin. They live in one of the houses, and the other (aside from the rustic barn with the watermill) is a showcase for Streisand’s almost OCD-like enthusiasm for American art and architecture. In the basement of that house is a warren of “shops” Streisand designed to hold her vast collections of dolls, antiques, clothing and the like. 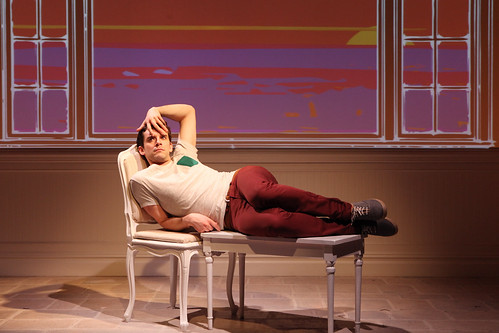 Into this odd subterranean world comes Urie’s Alex More, an unemployed actor who has just been fired from a gig in Disneyland. His charge is to manage the inventory and deal with this one and only “customer” ie Streisand.

Playing all the parts on an elegant white (or is it putty or linen or putty-linen?) set by Andrew Boyce accented by sharp projections and color shifts by Alex Koch’s projection design and Eric Southern’s lights, Urie is laser-sharp with each expertly delineated persona. He’s Sharon, Streisand’s estate manager, Brolin (hilariously so) and Barry, Alex’s screenwriter boyfriend. But most impressively, he’s Alex, a smart, fidgety guy who fights cynicism. And of course he’s Streisand, that enigmatic bundle of contradictions – ugly/beautiful, insecure/ultra-confident, indescribably popular/incredibly lonely.

Urie doesn’t do a Streisand imitation so much as he creates an odd character. With his slightly twisted body (butt sticking out, shoulders slightly hunched, expressive hands tipped with invisible long nails) and deep, nasal, Brooklyn-twang voice, his Barbra is distinct and, at times, resembles a modified version of the Elephant Man as played by Marlon Brando (oh, if such a thing could only have come to pass). If that sounds weird, it is, but then again Streisand’s interaction with Alex is weird.

She appears as a “customer” in a doll “shop” haggling over a French doll that blows bubbles. Alex, with his improv comedy training, rises to the challenge but won’t back down on the arbitrary price he sets. Somehow, this both frustrates and intrigues Streisand, and their relationship is launched.

The scenes in which Streisand, calling herself Sadie, interacts with Alex in the shop take on an almost surreal Beckettian quality. How strange is it that this wealthy woman is “shopping” in her own basement, dealing with a “salesman” on her payroll and attempting to buy a doll she already owns. Talk about the warped nature of capitalism.

But then Alex and Barbra become chummy, which is always dangerous for the non-celebrity in the relationship. Streisand’s quirks are on full display here (the evisceration of her movie The Mirror Has Two Faces is incredibly pointed), but so is her intelligence, enthusiasm and passionate drive to create. It’s easy to make fun of someone like Streisand, whose heart and ego are out there for all to see, but Tolins doesn’t take cheap shots. He’s clearly well versed in all things Barbra, and his deconstruction of the superstar is done with insight as well as affection.

The wonders of Urie cannot be overstated. He’s warm, funny, smart and incredibly dynamic. He finds moments and beats in the script that just keep elevating the show until you don’t think it could possibly be funnier or more enjoyable. On stage he’s able to show much more range and depth than he ever got to display on “Ugly Betty,” and he’s a revelation. Buyer & Cellar is a wonderful play made all the better for finding its perfect star.

[bonus interview]
I sat down with Michael Urie to talk about Buyer & Cellar for a story in the San Francisco Chronicle. Read the feature here.