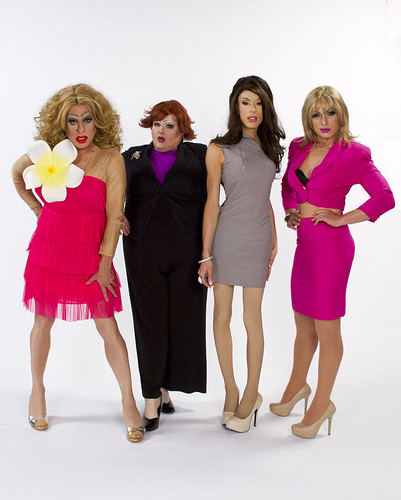 The cast of Sex and the City Live! includes (from left) Heklina as Carrie Bradshaw, Lady Bear as Miranda Hobbes, Alaska as Charlotte York and D’Arcy Drollinger as Samantha Jones. Below: Drollinger’s star turn as sex-positive Samantha practically steals the show. Photos by www.kenttaylorphotography.com


“Sex and the City” impressario Darren Star stopped by to see the San Francisco phenomenon known as Sex and the City Live!, a drag romp inspired by his HBO TV series, and his feeling was that the stage show was funnier than the TV show, and he’s absolutely right.

But how could the live version NOT be funnier than the boob-tube version when you’ve got four hilarious drag artistes playing the lusty ladies of Manhattan and the savvy D’Arcy Drollinger directing the whole enterprise? The show has evolved from its salad days at Rebel Bar and has launched a short run (through Aug. 10) at the Victoria Theatre. The place was packed Friday night, and it seemed the audience (a whole lot of women and gay men) was lapping up every detail of the experience, from the show on stage to the shirtless guy selling shots to the cosmos on sale at the bar.

This isn’t exactly a Rocky Horror-type interactive experience, but the audience can’t contain itself and must shout things at the stage from time to time, and the actors play that up big time (especially Drollinger, who steals the show as Samantha Jones and sets out to seduce every person in the house).

The divinely droll Heklina is Carrie Bradshaw, the part that will forever be associated with Sarah Jessica Parker, and she’s a hoot making the most of Carrie’s narcissistic narration and obsession with Mr. Big (played by the invaluable Leigh Crow, who looks a little like Chris Noth and also looks like a Munchkin when standing next to the rather imposing Heklina). Carrie is really the most boring of the quartet, but Heklina finds ways to comment on the character without making her a joke, and her costumes feature some of the largest floral accents ever seen on a human being. 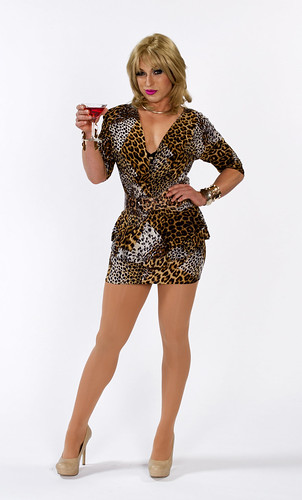 Lady Bear’s take on uptight lawyer Miranda Hobbes (Cynthia Nixon on TV) is full of sass and cynicism, and her tangle with a chocolate cake (especially once it’s in the garbage can) is hilarious. Alaska of “RuPaul’s Drag Race” fame, is prissy Charlotte York (the Kristin Davis part) has the more challenging task of convincing us she’s a prudish WASP on the hunt for a husband, but she’s got some good wig-flipping moments, especially when dealing with a man who shouts out obscenities in bed.

Watching Drollinger channel Kim Cattrall‘s Samantha Jones provides one big laugh after another. His intonation and body language are perfect. If Catrall is unavailable for that elusive third big-screen “Sex” outing, they should hire Drollinger.

Playing various boyfriends and secondary characters are Andy Alabran and Jordan Wheeler, who more than hold their own against the leading ladies, which is saying something.

Taking the best bits of more than a half-dozen “Sex and the City Episodes,” director Drollinger and his crew have fashioned two episodes (complete with an outstanding video title sequence) that give each of the ladies a substantial plot and plenty of laugh lines. It’s not at all surprising that two of the plot lines involve the same body part. In one, Charlotte is anxious about becoming the “up the butt girl” (“Men don’t marry the up the butt girl,” she says) and in the other, Miranda encounters a partner who performs “tuchis-lingus.”

As parodies go, this one is pretty loving, and some of the original writing in this mish-mash is pretty funny on its own. But you come to Sex and the City Live!” for the ladies, and they do not disappoint. Tickets are only $15 – the best deal you’ll get on Sex in this or any other city.

IF YOU GO
Sex and the City Live! continues through Aug. 10 at the Victoria Theatre, 2961 16th St., San Francisco. Tickets are $30. Click here for tickets.

3 thoughts on “Raise your cosmos to Sex and the City Live!”