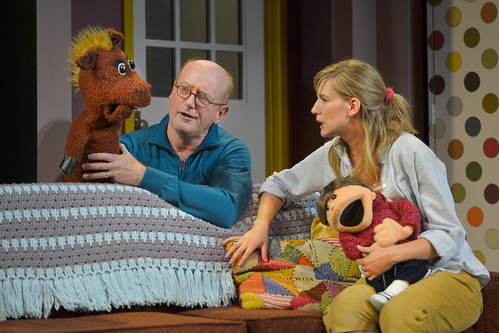 
You don’t often think of puppets and drama together, but playwright David West Read makes a strong case for the combination in the world premiere of his The Great Pretender, the first show of TheatreWorks’ 45th season.

Playwright Read and director Stephen Brackett establish a very grounded world in which they can veer from big, satisfying laughs to emotional explorations of depth and substance, which is not an easy thing to do. It helps that they have a marvelous cast and several puppets that turn out to be something more than just adorable pieces of cloth (the puppets are designed by David Valentine).

The cheerful workaday world of the “Mr. Felt” show, a staple of children’s morning television for decades, is still reeling from the loss of one of its own. The show’s host, Roy (Steve Brady), has lost his wife and chief puppeteer in a terrible accident, and it’s been a year since any new episodes have been shot. Director Tom (Michael Storm) thinks he may have found a young woman to take over as a puppeteer. It turns out Jodi (Sarah Moser) grew up with the “Mr. Felt” show and does a fantastically accurate voice for Frances, the show’s primary puppet. 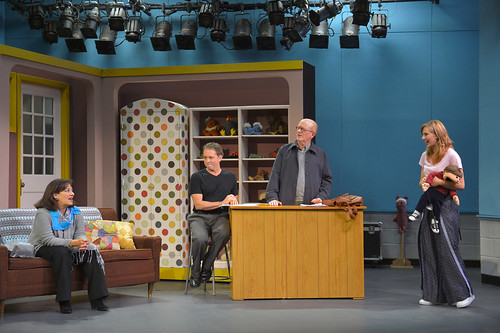 For Roy, the prospect of interacting with Frances, who was the creation of his late wife, is an emotionally tricky one. He wants the show to continue, and he doesn’t want his young viewers upset by changes to the cast, but it proves to be more challenging than he realized to resume interaction with the puppets and to coach the young, inexperienced puppeteer to be more like his wife.

Elements of grief and sadness are strong in the play, but there are also rich veins of humor, much of what comes from the character of Carol (Suzanne Grodner), puppeteer for the show’s second-banana character, Carol the Pony. Carol the person is a little rough in real life – filters are not her thing, but she’s honest and quite often hilarious.

Just when you think Read’s play is going to be about Roy and Jodi, the focus shifts, and with the help of Daniel Zimmerman’s nifty set, we’re dealing with something larger than one key relationship.

A product of last year’s New Works Festival at TheatreWorks, The Great Pretender keeps threatening to be cute or sitcom-ish but consistently undercuts those expectations with intelligence, quick wit and characters with recognizable emotional lives.

In its final third, the 100-minute play spends a little too much time on Carol’s baseball-playing cat screenplay idea, and Jodi’s story thread still feels unresolved by the end (and Moser is so delightful in the role you don’t want her to disappear), but the joys of this Pretender are far more plentiful than its flaws.