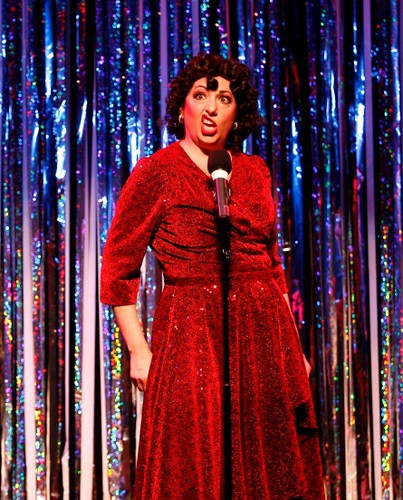 Gina Kreiezmar delivers a spot-on Patti LuPone impression in Forbidden Broadway: Alive and Kicking! at Feinstein’s at the Nikko. Below: Kreiezmar again, this time as Mary Poppins. Photos by Carol Rosegg


It must be better in New York.

I’ve heard about Forbidden Broadway for much of its 32-year history and enjoyed some very funny recordings on several of the cast albums, but until this week, I had never seen a production. In New York, time is generally consumed with actual Broadway, which leaves little time for the Forbidden variety.

A touring version of the off-Broadway show, dubbed Alive and Kicking! opened an extended run at Feinstein’s at the Nikko Thursday, and the 70-minute show was underwhelming to say the least.

Four performers, each of whom has some appealing moments, and musical director Catherine Stornetta do their best to make the most of some generally weak and dated material by Gerard Alessandrini, the show’s creator. 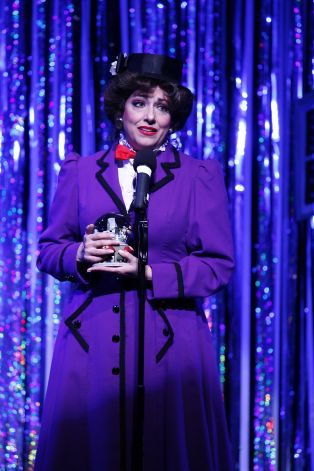 If, when spoofing Broadway, the best you can come up with is Annie worrying about gray hair, Cameron Mackintosh selling merchandise and Barbra Streisand being egotistical, you’ve got problems. The two most current bits involve a lengthy spoof of Once (which happens to be playing a few blocks away at the Curran Theatre) and an Idina Menzel/”Let It Go” riff. Otherwise, we get Mandy Patinkin, Ethel Merman, Les Miz and Jersey Boys rather than anything that’s making news on Broadway today. Perhaps they figure we numbskulls in the provinces wouldn’t get the most current Broadway jokes about Hedwig or Rocky or Aladdin.

The saving grace here comes in the form of cast member Gina Kreiezmar, who delivers a spot-on Patti LuPone impression (“everything’s coming up roses for me and for meeeeee”) and offers an amusing Mary Poppins suffering the indignities of dumbed-down shows manufactured for low-brow audiences in “Feed the ‘Burbs.”

There are laughs to be had here, but they’re not nearly as frequent as they’re intended to be, and too often the numbers are shrill and forced and as low-brow as the shows it’s intending to lampoon.