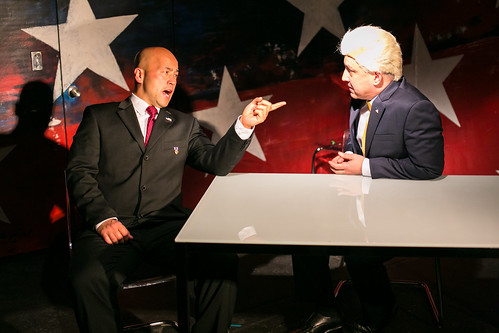 No really, let’s talk about race: cable news talking head Dave Matthews (Matthew Lai, right) interviews Len (Michael Uy Kelly), the Republican candidate for president who’s not just hapa but a member of every race and ethnicity on the planet in the world premiere of Mutt: Let’s All Talk About Race! by Christopher Chen, in a co-production by Impact Theatre and Ferocious Lotus Theatre Company. Below: Democratic National Committee heads Elizabeth (Patricia Austin, far left) and Mikey (Lawrence Radecker, far right) are thrilled to have found a hapa candidate for president in Nick (Matthew Lai) and a powerful brain trust in his campaign consultant, Hanna (Michelle Talgarow). Photos by Cheshire Isaacs


Between the Shakespearean twists of House of Cards and the utter inanity of Veep, you’d think that we’d have Washington politics pretty well covered by pop culture. Well clearly not because we need to make room for Mutt: Let’s All Talk About Race!, the absolutely hilarious and crazy smart new comedy from San Francisco playwright Christopher Chen.

Chen, you may recall, made quite a splash with The Hundred Flowers Project two years ago. That award-winning play pushed boundaries and offered all sorts of juicy theatrical challenges and made it clear that Chen is the kind of writer who delights and provokes and digs deep with intelligence and inspiration.

His latest work, Mutt, is an entirely different kind of play – a rollicking satirical comedy with grand guffaws and so many great lines the whole thing ends up feeling like a great line – but the brains are bolstering every belly laugh.

Chen is doing nothing less than taking on the issue of race in a big, bold way. He presents a completely corrupted and ridiculous two-party system that couldn’t’ make a good choice if the fate of the world depended on it (oh, wait, it does). The Republicans, still smarting from the last presidential election, realize they have a problem with race. With the help of a race management operative named Hanna (the wonderfully grounded Michelle Talgarow), they set out to find a hapa (mixed Asian race) candidate because Asian has been deemed a “safe” race in that it’s practically white. 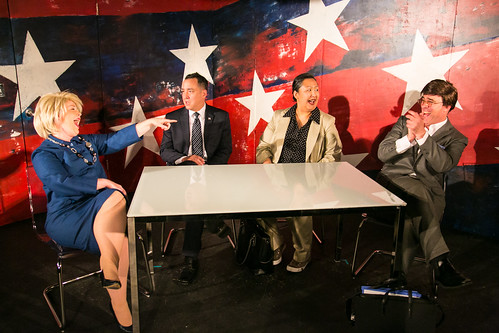 The perfect candidate turns out to be a “super hapa” who has some of every race in the world floating through his DNA. Len Smith (Michael Uy Kelly) is a god-like figure who feels the course of all history running through him. All that inner activity leads him to be something of a dolt on the outside, but he looks good on TV and has enough sexual charisma to make the whole world want to sleep with him, so he’s a shoo-in.

Frustrated by politics as usual, Hanna goes rogue and finds her own hapa candidate in Nick (Matthew Lai) to bring some semblance of reality into the presidential race. It may come as no surprise to find out that such reality is going to be in extremely short supply.

This world-premiere co-production between Impact Theatre and Ferocious Lotus Theatre Company is not only well written, it’s expertly directed by Evren Odcikin, who makes the tiny La Val’s Subterranean space feel more fluid and limber than ever before. The play doesn’t feel constrained by the space so much as supported by it. Odcikin’s exuberant cast knows how not to push the comedy too hard to maximize laughs.

As both the Republican and Democratic Party hacks, Patricia Austin and Lawrence Radecker could not be funnier, and Austin deserves a special shout-out for a piece of slapstick comedy that precedes one of the funniest bits I’ve seen on a stage in a good long time.

The invaluable Marilet Martinez, in a parade of ever-more astonishing wigs, is the world’s worst therapist, a series of witnesses to brutal crimes, and a representative of the Latin immigrant community who does not take kindly to political bullshit. She definitely puts the whip in whip-smart comedy.

Most of the actors play multiple characters, and at the performance I saw Thursday night, they seemed to be feeding off the packed audience’s collective delight, relishing in comic pauses and savoring the raucous laughter.

Race is certainly no laughing matter, unless, of course, the political issues surrounding it are sliced and diced into such comically delicious (and dare we say, nutritious?) bite-sized pieces the way they are in Mutt.

2 thoughts on “Far from mangy, this Mutt is a gut buster”