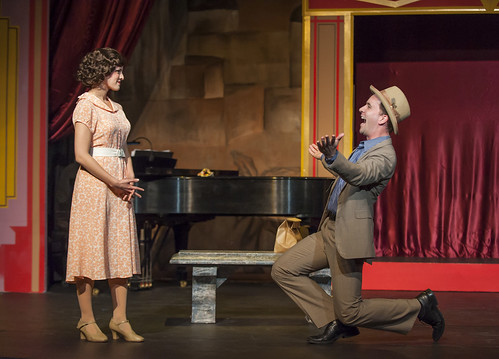 Kari Yancy as Alice swoons while Galen Murphy-Hoffman as George declares his love in the world-premiere musical Painting the Clouds with Sunshine, a first in the 42nd Street Moon canon. Below: Movie stars Iris (Allison F. Rich) and Russell (Ryan Drummond) demonstrate a little Fred and Ginger action. Photos by David Allen


The song titles say a lot about what this musical is like: “Livin’ in the Sunlight,” “You Hit the Spot,” “Sweeping the Clouds Away.” If it seems there’s a rosy glow emanating from these titles, that’s exactly right. You’ll find no more glowing show in town than 42nd Street Moon’s first original musical in its two-decade history, Painting the Clouds with Sunshine.

This is a stage musical in love with movies. Creators Greg MacKellan and Mark D. Kaufmann have learned a whole lot from the passing parade of lost, forgotten and banal-to-brilliant musicals that have made 42nd Street Moon’s reputation since its debut in 1993. They eschew the corniness of most musical books, build in a whole lot of charm (from both performers and their songs) and add just enough shadow and smarts to keep the show from flittering away in the breeze of twirling tap dancers.

MacKellan (a 42nd Street Moon founder, with Stephanie Rhoads and Kaufmann, who also directs, have chosen Depression-era movie songs from 1929 to 1939 to tell their original tale of a hardworking journalist, a not-so-naive farm girl from Iowa and the world-weary owner of a diner whose paths cross in 1935.

The plot, while not exactly heavy drama, isn’t light. Morals are compromised (or at least sorely tested), hearts are broken (and mended), secrets are revealed and propositions are tendered. The action takes place in a Hollywood of swanky parties, graveyards and streets full of people down on their luck. 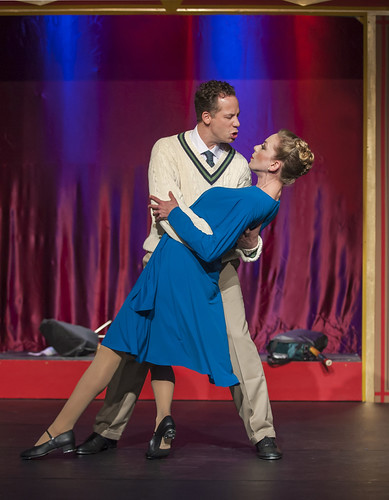 There’s only a cast of eight, but they work hard to populate Tinsel Town. We even get glimpses of the glamorous movies themselves in the Fred-and-Ginger like Russell and Iris (Ryan Drummond and Allison F. Rich), who convey a lovely sense of escapist fun that made the movies so popular (and important to the national mood) in the ’30s.

Galen Murphy-Hoffman is George, a reporter for the Hollywood Citizen News, and Kari Yancy is hyper-appealing as Alice, the young woman who slings hash but has big dreams, not the least of which is helping her folks back in Iowa survive the financial disaster of their farm.

John-Elliott Kirk is a diner regular who works at the RKO Studios, and he finally got the nerve to act on his years-long flirtation with diner owner Willa played with tenderhearted strength by the invaluable Cami Thompson. Nicole Frydman is the wisecracking best friend of Alice and Justin Gillman is a newsstand owner who knows how to survive on the streets pushing more than papers.

If these folks are all types, they’re also more human than they might be than in, say, an actual 1930s movie. They also have a robust selection of songs from the era to keep things lively. There are great songwriters represented like Rodgers and Hart (“My Friend the Night”) and Frank Loesser (“Some Like It Hot”) and some of the era’s most industrious tunesmiths like Mack Gordon, Harry Revel and Al Dubin.

Among the many musical highlights (Dave Dobrusky is the pianist and musical director) are “Breakfast Table Love,” “Dusty Shoes” and “Gather Lip Rouge While You May.” The vocal arrangements rely heavily on harmonies, and they’re gorgeous. Staci Arriaga’s choreography has bounce and inventiveness, and the costumes by Felicia Lilienthal add delightful period color.

The charm of Painting the Clouds cannot be overstated. It has been conjured with tremendous skill and true affection for the period. The show, like the movies it celebrates, is “an elixir of joy to put us in dream land for a couple of hours.”