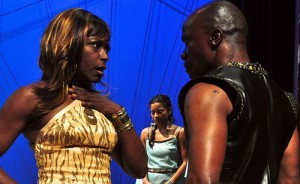 One general problem I have with Greek tragedy is that I’m not Greek and, most days, not terribly tragic. I’ve experienced, a time or two, the feeling of catharsis that can come from being immersed in godly and ungodly troubles. Fiona Shaw as Medea comes to mind, and Berkeley Repertory Theatre’s The Oresteia had its acutely emotional moments.

But my favorite Greek tragedy wasn’t tragic at all. John Fisher’s Medea: the Musical, which upended all that stuffed-toga stuff and had a ball at the expense of people taking themselves (and life) too seriously. That was 16 years ago, and I still use it as my barometer for making sense of everything that’s Greek to me.

I was secretly hoping that IPH… the new translation/adaptation of Euripides’ Iphigenia at Aulis by Irish writer Colin Teevan would be more giddy than grotesque. Sure, the story of a father forced by the gods to sacrifice his own daughter for the good of his country and its war against Troy is rough stuff. But John Fisher found a way to have fun and be serious.

The U.S. premiere of Teevan’s script marks a first-time collaboration between Brava Theater and the African-American Shakespeare Company – two companies that seem to work well with and benefit from one another.

I try not to pay too much attention to pre-show buzz, but I had heard something about the show being part rock concert (in fact, I read it in the program note from director Dylan Russell), and that made me think this could be a not-your-average-Greek experience.

And to some degree, IPH… is an attempt to make the ancient contemporary. There are some amusing and intriguing video projections (by Wesley Cabral) mixed in with live video of the actors on stage, and there is music, courtesy of a lively chorus (Lisa Lacy, Marilet Martinez, Sarita Ocon and Natalia Duong). Music Director Uma Errickson had fun with the songs harmonies, especially the number singing the praises of superstar Achilles (Luke Taylor).

But when it comes right down to it, this is a thick slice of Greek tragedy whose 90 minutes feel a lot longer. The first 30 minutes of the play is dominated by monologues – first from Agamemnon’s servant (Peter Kybart), then from Agamemnon himself (L. Peter Callender, the new artistic director of African-American Shakes), then from his brother, Menelaus (Dorian “Jim” Lockett). The men in the play tend to orate, while the women actually seem to converse.

At about the half-hour mark, we finally get a glimpse of Klytaimnestra (C. Kelly Wright) and Iphigenia (Traci Tolmaire). They’re singing beautifully to one another at the back of the Brava Theater, and it’s a huge relief when they arrive. The pontificating and sermonizing scales down, and the drama kicks into gear.

Callender’s intensity knows no bounds. Every labored breath is fraught with emotion as Agamemnon weighs the life of his beloved daughter against the well-being of his country and its army.

And Wright is one of those actors you go out of your way to see because she’s so grounded, so real and so very grand. She’s larger than life but constantly reflects real life through genuine emotion. Her motherly connection with Tolmaire is deeply felt and brings us most fervently into the play’s tragic heart.

Director Russell’s supporting cast doesn’t have the firepower of Callender and Wright, which tends to diffuse their power.

Stylistically, the modern touches and the music don’t always work. The video can steal too much focus from the actors, although the sheer size of set designer Matt McAdon’s multi-level, gracefully ramped stage calls out for ways to bring us closer and deeper into the emotion.

The music doesn’t always work, either, as we find when Menelaus does sort of a beat-box rap whose lyrics are mostly unintelligible (although the chorus’ back-up “be doo ba doo’s” are lovely).

I kept wanting IPH… to break its Greek bonds and just be real for a minute. Callender and Wright come closest to making those moments happen, but the tragedy here remains more of an idea rather than an emotional state.