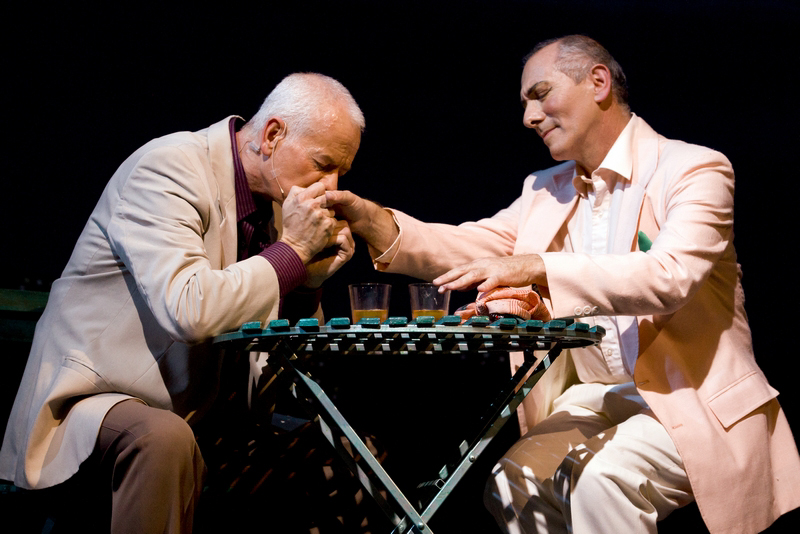 Curt Denham (left) is Georges and Ray Mendonca is Albin in Broadway by the Bay’s La Cage aux Folles. Below: Denham performs with Les Cagelles. Photos by Mark Kitaoka

The irony surrounding Friday’s opening-night for La Cage aux Folles at San Mateo’s Broadway by the Bay was sweet. Audience members showing up for this glitzy gay musical fairy tale were not able to park in the parking lot of the San Mateo Performing Arts Center (aka San Mateo High School) because there was a football game going on.

That’s right: it was the classic collision of quarterbacks and drag queens.

And I think the drag queens won – at least they were more entertaining.

I’m happy to tell you that this production, ably directed by Marc Jacobs and energetically choreographed by Robyn Tribuzi, is a solid La Cage. Leads Curt Denham as Georges, the master of ceremonies, and Ray Mendonca as Albin, the star drag queen known as Zaza, bring abundant talent and savoir faire, which keeps this large production rolling right along.

But what really delights me is the show itself. Jerry Herman, as I’ve said before, is a national treasure. He’s king of the old-fashioned, well-built show tune. Because his songs are catchy and hummable and, for the most part, as happy as can be, he’s not taken all that seriously as a composer. He’s old school, like Irving Berlin, and while Sondheim shows will be revered and revived for centuries, high schools and community theaters will be performing Herman shows as long as there’s a staircase for Dolly to descend.

Herman’s big three, Hello, Dolly!, Mame and La Cage, are three of the most tuneful shows in the last half century, and it’s extraordinary that Dolly and La Cage are separated by nearly 20 years. Dolly was de rigueur in the early ’60s, in fact that old-fashioned kind of musical was having its last hurrah as Hair waited panting in the wings. By 1983, La Cage must have seemed positively prehistoric. Except that it was less a throwback and more a reminder of just how delightful a solid-gold musical comedy could be.

Also in the early ’80s, as the blight of the AIDS epidemic began its devastating reign, the notion of a splashy Broadway musical about two men – one of them a drag queen – happily married and raising a son was a novelty (and an offensive one to some). Twenty-seven years later, the world has changed enough, at least in California, the most recent battle ground for same-sex marriage, that the central gay love story has moved beyond quaint. It’s now just another marriage, and the conservative politicos who set the farcical plot in motion are completely recognizable types and not all that different from the conservatives of today. And they’re just as un-funny as they were in the early ’80s. Harvey Fierstein’s book marries classic farce and romance. The fact that his central lovebirds are two men seems less important than the quality of the romance. When Georges sings “Song on the Sand” to Albin, it’s a swoon-y moment for anyone who’s ever been so in love they’re not afraid to be corny or sentimental about it.

As sweetly sentimental as the show is, there’s a surprisingly dark element to it, and that comes in the form of son Jean-Michel’s behavior toward Albin, his step-father (or step-mother depending on the mode of dress). When Jean-Michel becomes engaged to the daughter of a right-wing nut who wants to shutter every drag club on the Riviera, the son would rather shame Albin into leaving the family home for a night than risk the shame of his father-in-law-to-be’s disapproval. Jean-Michel is outrageously mean to a man he supposedly loves, and the intensity of that bad behavior seems somewhat out of step with the frothy, spangly nature of the show. Of course that bad behavior leads to the show’s greatest moment: when Albin, deeply wounded by his step-son’s betrayal, affirms his self-worth in the spectacular anthem “I Am What I Am” – one of the great Act 1 enders of all time.

But if Albin were really able to connect with his dignity, as he seems to do in the song, would he really then allow himself to be trained in the ways of masculine behavior in the number “Masculinity”? I’m not convinced of that, but then again, I don’t need to be because the song ends up being so fun.

Any lapses in logic can be forgiven in a show that offers a life-affirming, live-in-the-moment show stopper like “The Best of Times.” Sure the song is repetitive and could have used another verse (or two), but it chokes me up every time. The first time I saw La Cage in London, some 25 years ago, I remember the effect of that number and experiencing for the first time the musical theater feel-good high – the high that made me a lifelong show tune fan.

I had that same feeling watching Broadway by the Bay’s La Cage, and it made me grateful all over again for musical theater – and especially for Jerry Herman.

1 thought on “Gaggles of gays ruffle feathers in La Cage”