Two extraordinary shows are lighting up Bay Area stages, and in each of them, the specter of death hovers in the shadows.

In Trevor Allen’s intelligent, compassionate adaptation of Frankenstein at the Thick House, Victor Frankenstein defies death by creating life from dead parts and cowering from the unexpected results. 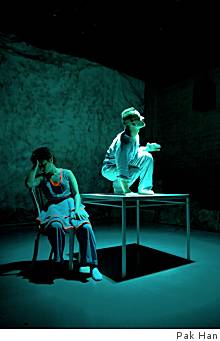 Over at Intersection for the Arts, Campo Santo and the Erika Chong Shuch Performance Project ponder the death of a goldfish and, through engaging text and movement, ruminate on the nature of life and breath in The Future Project: Sunday Will Come.

Both pieces, while they couldn’t be more different from one another, are completely compelling and find grace amid seriously dark subject matter.

In Sunday, a whole troupe of people, led by performers Erika Chong Shuch and Sean San José, have created a simple, hour-long three-hander about a seemingly small matter – a man and woman (Shuch and Sean José) contemplate the illness and imminent death of their goldfish. They act out the creature’s fight for breath through some extraordinary movement on a small but sturdy table, and their discussion of this aquatic mortality resonates in larger waves.

Troubadour Denizen Kane weaves in and out of the central action, lending the tale his soulful voice and songs that give the show a soothing pulse and a throbbing heart.

There’s none of the pretension that can come from a hybrid dance-theater-music-spoken word piece because the performers are so incredibly focused, so funny and so intensely emotional. They seem to live partly in the world of boring, normal people and partly in the world of extraordinarily talented artists who sing and move and speak on an entirely different, entirely dazzling plane. 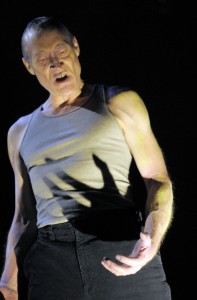 Allen’s The Creature is equally dazzling but in entirely different ways. His adaptation rescues Mary Shelley’s Frankenstein from the domain of creature features and returns it to the domain of gut-punching drama, where it belongs.

Taking his cure from the 1818 novel, Allen gives his stage over to three narrators: Captain Walton (Garth Petal), who is searching for a sail-able passage through the North Pole; Victor Frankenstein (Gabriel Marin), a scientist with a gift for reanimating dead matter; and the Creature (James Carpenter), who had the bad luck to be created by a scientist unable to bear the responsibility of his great work.

Time bends as we hurtle back and forth between past and present as the tale of Frankenstein’s creation takes shape and we, along with the scientist, begin to comprehend the scope of what he has done in creating a man from disparate dead parts. The sea captain makes for a sympathetic ear, but what really makes the story land is hearing from the Creature himself.

While Petal and Marin are grounded, intense and wonderful, Carpenter’s Creature is simply astonishing. This is the kind of performance – brave, complex and utterly devastating – that lingers for days, if not years afterward. Often crouched on a table and cast in shadows by Stephanie Buchner’s lights, Carpenter creates a vision of a misunderstood giant with minimal makeup and virtually no gimmickry. Props to Boris Karloff and his makeup team, but Carpenter is the real Creature – not a grunting monster (or one that warbles “Puttin’ on the Ritz” for that matter), but an eloquent soul touched with self-sustaining genius and afflicted by shattering loneliness.

Carpenter, under the direction of the always-astute Rob Melrose (of the Cutting Ball Theater), is giving the can’t-miss performance of the season. He already has the reputation of being one of the very best actors in the Bay Area. His work in The Creature allows us to see something he hasn’t really shown us before. And it is, in short, magnificent.
(PHOTO CREDIT: James Carpenter in The Creature by Allesandra Mello)

The Future Project: Sunday Will Come continues through Nov. 7 at Intersection for the Arts, 446 Valencia St., San Francisco. Tickets are $15-$25 on a sliding scale. Call 415 626-2787 or visit www.theintersection.org