In his highly enjoyable book How Does the Show Go On? An Introduction to the Theater (Disney Editions, $19.95), Thomas Schumacher recounts, in no particular order, all the jobs he’s had in his life, from childhood in San Mateo to the top of the heap as president of Disney Theatrical Productions.

“I want kids to see that you can end up doing a lot of different things before you end up doing what you always dreamed you’d be doing,” Schumacher says over a cup of tea at the Four Seasons in San Francisco.

He’s back in the Bay Area — he left about 30 years ago — to promote his book, which came out last fall and has already sold out its first printing.

The night before, he was in San Jose for an event at Children’s Musical Theatre, where he talked to a group of 200 local young performers whose questions, he says, were “outstanding.” 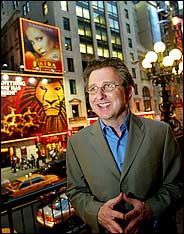 The showman in Schumacher, 50, also came out during the event. He brought a trunk of props from various Disney shows — a funny wig from Mary Poppins (made, as he told the kids, from “fur off a yak’s butt,” which you can bet got a laugh), a baby doll from Tarzan that “leaked” water on a volunteer from the audience, and a shattering vase from Poppins.

While in town, Schumacher was also on Ronn Owens’ KGO radio show. He was supposed to do 10 minutes and ended up staying for an hour because people kept calling and asking questions — mainly about family members who wanted to work in the theater.

“It was amazing all the people who called,” Schumacher says. “You’d never find people calling to talk about theater like that in L.A.”

One of the callers was an old friend who appears in Schumacher’s book. There’s a photo of a young Tommy Schumacher doing the splits in a Peninsula Civic Light Opera production of Hello, Dolly! (he was Barnaby Tucker), and Barbara Squire, the actress who played Dolly, also in the photo, called to say hello.

Several of those teachers receive shout-outs in the book: “Teachers have immeasurably enriched my life,” Schumacher writes. “And there is no one I’m more grateful for every time I enter a theater than the wonderful people who were and are my teachers, whether in school, in life or in theater.”

He specifically mentions three from San Mateo: Marian Haworth, who taught him about technical theater at age 14; Roy Casstevens, who taught him about directing at 15 (“and not a day goes by that I don’t use some aspect of what I learned from him”); and local choreography legend Berle Davis (“everything I know about discipline, practice and respect in theater goes back to Berle”). A fourth teacher, John Cauble, set Schumacher on a producing track at the University of California, Los Angeles.

After all he’s accomplished in his career, Schumacher finally got around to writing a book, the kind of book, he says, he would have been crazy about when he was a theater-hungry kid.

Indeed, the book is a trove of theatrical information. Schumacher illuminates every aspect of the theater, onstage (actors), backstage (designers, crew) and offstage (publicists, house managers) using examples from Disney shows including Beauty and the Beast, The Lion King, Tarzan, Mary Poppins and the latest Broadway hit, The Little Mermaid.

Soon after the book hit the shelves, Schumacher was warned by friends that the primary audience would be MAGU, i.e., “maiden aunts and gay uncles.”
But kids — and plenty of adults — are eating up the book.

One of Schumacher’s friends, the great lighting designer Natasha Katz (whom Schumacher profiles in the book), admitted that, though she has worked in the theater for a long time, there were things she learned from the book.

“That has happened more than once,” Schumacher says. “Theater professionals and people who think they know all about theater are afraid to admit that there are things they don’t know. I’ve been told there’s a secret audience for the book of theater people filling in their knowledge gaps.”

Now that Little Mermaid is up and running (after an opening delayed by the stagehands’ strike), Schumacher is turning his attention to other Disney Theatrical projects.

Upcoming is a reading of The Man in the Ceiling, a new musical by composer Andrew Lippa and author Jules Feiffer (based on his book of the same name). Also in development is a show based on the book Peter and the Starcatchers by Ridley Pearson and Dave Barry, which is sort of a prequel to Peter Pan.

“Both of these shows are small shows,” Schumacher says. That is a decided to contrast to the typical Disney spectacular such as the glitzy Mermaid.

Before either of those shows has completed its long journey to opening night, Schumacher will be hopping the globe as he and director Julie Taymor figure out how to make The Lion King both larger and smaller to fit into various international venues.

He’ll have to decide what’s next for Mermaid _ London or Japan? _ and, along with co-producer Cameron Mackintosh, launch the Mary Poppins UK tour and, eventually, the North American tour, and retool Tarzan for Hamburg.

“I love, love, love what I do,” Schumacher says. “It’s agony rarely and joyful mostly.”
There will be another book, he says, whenever he and collaborator Jeff Kurti can get around to it. There’s no definite plan, but the book will likely offer another glimpse into the theater world.
Until then, Schumacher will continue to flog How Does the Show Go On?

“I’m like the Gideons with this book,” Schumacher has joked more than once. “I want one in every house.”

1 thought on “Tom Schumacher: From Broadway to bookseller”